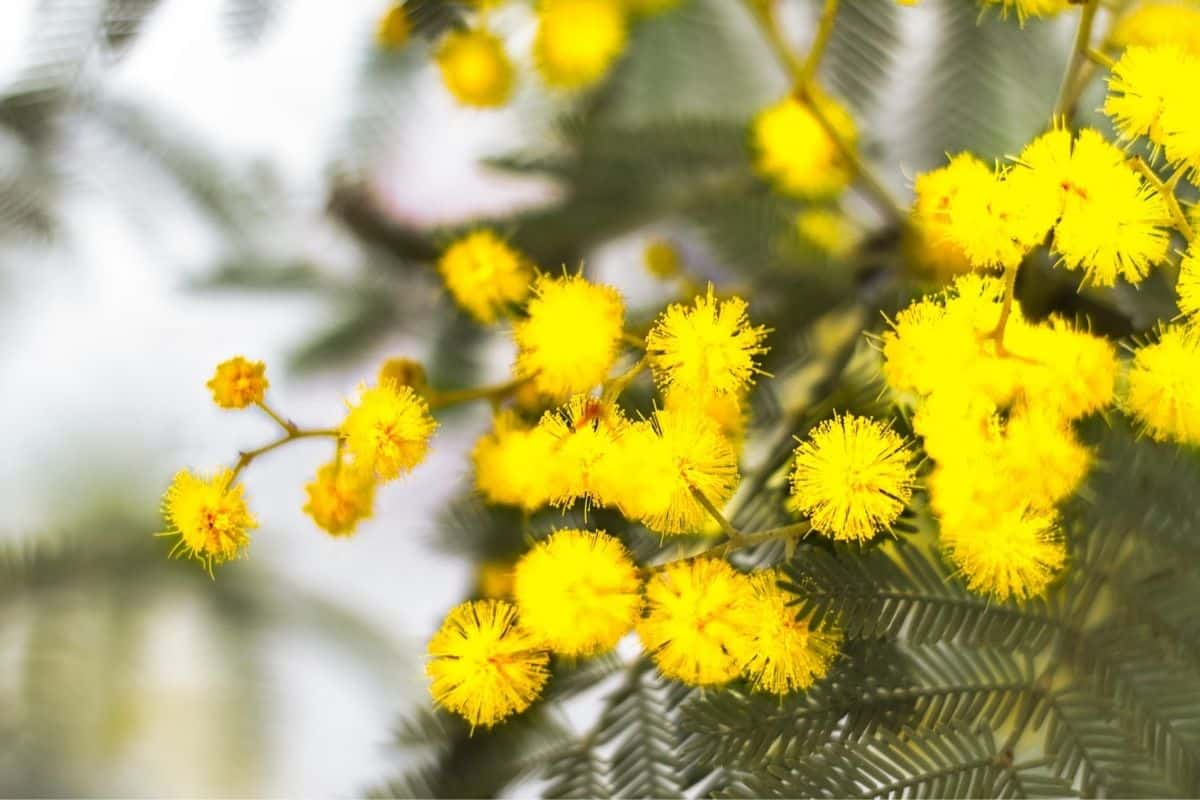 You must be thinking that this Mimosa is something you would order from a fancy cocktail bar, but this is definitely more than just a classy drink! Its small pom pom-like flowers come in many clusters that are also a favorite in gardens and yards. Just like the fancy drink, its colors are just as bright and bubbly. But don’t let this fool you since it is actually also a weed!

The Mimosas were first mentioned in 1731 as a tree or shrub with small round flowers and prickly leaves. They are annuals or perennials native to the tropical or subtropical regions of the hemisphere. It belongs to the large genus Mimosa of the pea/legume or Fabaceae family.

This famous flower name has a cute reason for it. Mimosa derives from the Latin words mimus meaning mime and osa meaning feminine. German botanist Wilhelm Pfeffer was the first to discover the flower during his tests for plant habituation. Aside from its Latin name, this flower is very well known for how its leaves mimic sudden animal sensitivity.

Some of the most common species of this genus include the ever-famous sensitive plant (M. pudica), wait-a-minute bust (M. aculeaticarpa), and elegant Mimosa (M. arenosa).

The works of Mercé Rodoreda bring to life the symbolism of Mimosas. As told in the tale, the flower is symbolic of the shyness of a young maiden in love with a mighty soldier.

This floral motif is a symbol of cheerfulness and independence. In fact, the lands of Australia and South Africa honor these prickly flowers as floral emblems!

Turning to astrological beliefs and readings, the blossoms are said to be the floral embodiments of the zodiac signs Capricorn, Aquarius, and Sagittarius.

The most manifesting meaning of these cute flowers lies not in the flower itself but in the leaves. Some of these meanings include sensitivity and shyness or bashfulness which are actually from the way the leaves close themselves up when touched! Really something out of the ordinary.

What does a White Mimosa Flower Mean?

White Mimosas bear the meaning of sensitivity and attentiveness. This meaning is associated with the mimicry of how the leaves fold upon a trigger.

What does a Red Mimosa Blossom Symbolize?

Mimosas with red petals are symbolic of secret love and being nervous. Just like the shyness of the leaves when touched, who wouldn’t act that way with their first love, right?

What does a Pink Mimosa Floret Represent?

A representation of vitality and beauty out of the ordinary is what pink petaled Mimosas stand out for. It beholds not exquisiteness from its flowers but also independence.

What does a Purple Mimosa Bloom Indicate?

Apart from symbolizing sensitivity or shyness, purple Mimosas indicate one’s delicate feelings. With how the flowers appear, who wouldn’t say a purple one isn’t delicate!

What does a Yellow Mimosa Flower Symbolize?

Yellow Mimosas is just as exciting as the cocktail mix! It symbolizes cheerfulness through the bright yellow petals and blessings of good luck with the abundance of its floral clusters.

What is the Cultural Significance of a Mimosa Flower?

A small quaint town in Montenegro celebrates the beauty of these flowers every February. In Herceg Novi, the town is transformed yearly with colorful flowers and decorations for the Mimosa festival. The flowers in this town are believed to be the heralds of Spring signaling the end of Winter.

According to the legend told in India, the flowers were said to have fallen from a falcon’s claw and feather. It fell onto the ground and bloomed into what is now known as the Indian thorn tree (Mimosa catechu).

Italy honors these flowers in a different way during International Women’s Day every March 8th. Mimosas are gifted to women across the country and are a life-giving symbol of a goddess or hero. Looking back, this tradition dates back to the offertory practice in the temple of Isis in Egypt and the temple Solomon.

What is the Biblical Meaning of a Mimosa Blossom?

In Christian beliefs, the Mimosas symbolized the certainty of Christ’s Resurrection. The flower’s bright yellow color symbolized the rising sun while its leaves mimicked the sentient of life.

A Coptic legend also believes in the Mimosa’s symbolic association with Christ. The legend says that the tree or shrub flower’s mimicry effects reflect the first worship to God.

What does a Mimosa Floral Tattoo Symbolize?

These flowers are actually considered a very invasive species with how fast they can multiply. It is frequently used as a garden ornament tree or shrub with its pretty little flowers blooming in Spring.

Unlike other blossoms, Mimosas cannot be consumed in any manner because of the prickly thorns it has. It would be surprising to you if you found out that these flowers can be more than just ornaments since it has traditionally been used as medicine for some ailments.

Mimosas are known to have antibacterial, antivenom, antifertility, and antidepressant properties. This is the reason why several countries such as the Philippines, India, Thailand, Vietnam, and many others use it in such a way. For the Thai-Lanna people in Northern Thailand, the flower can be used to treat diabetes mellitus and insomnia.

The folk in Fiji also practices the use of these flowers to treat fever, leprosy, insect bites, and hemorrhoids. In the Philippines, it is mixed with coconut oil to treat common wounds and ulcers. The most surprising use of this flower can be found in New Britain and Papua New Guinea.

Who knew that this plant’s roots and leaves can be used to treat swollen testicles? That is the common traditional remedy for the folk there! A word of warning that it’s a must to always consult a medical professional before using this plant or any part of it for medical purposes.