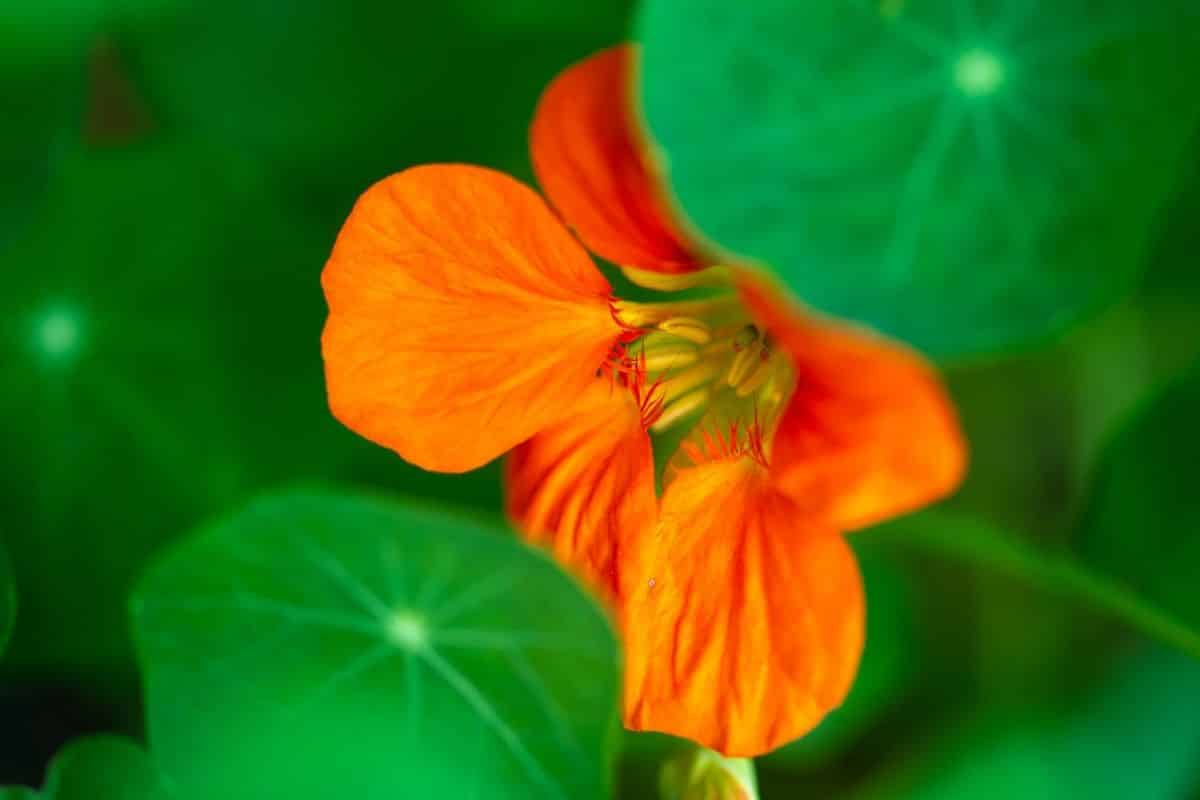 The Nasturtiums are charming dainty flowers that will surely get you intrigued. The name itself is already an interesting catch! The flowers are mostly simple and not as out of the ordinary as the rest of the flora out there, but the meaning and symbolism behind these will definitely make them stand out in a floral crowd! Keep on reading and it is a sure bet that you will add the Nasturtiums to your garden collection!

Nasturtiums were first defined in 1704 as an annual herbaceous plant with a trailing habit of growth. Nasturtium plants have showy spurred flowers with edible leaves and seeds!

The flowers are native to Central and South America. It was found growing in most damp areas in Mexico and Peru and was used as a food substitute for Watercress! If you don’t know what Watercress is, it is a staple vegetable in the diet of many brave Roman warriors!

The Nasturtiums belong to the genus Tropaeolum of the Tropaeolaceae family. Sometimes, the same floral name Nasturtium arises from the Brassicaceae or crucifer family. It is more often than not, mistaken to be identical with the garden cress!

Tropaeolum also has an interesting past. It comes from the Greek word tropaion meaning trophy. The genus got its name from the v-shaped figure of the flower appearing like a shield with a helmet! The story behind this intriguing past will be revealed if you keep reading!

This genus originally comes from a Greek word meaning to twine. In Latin, this genus can come from several words. Those words include nast meaning nose and torquere meaning to twist – pertaining to the plant’s nose-twist-like habit of growth.

Did you know that Nasturtiums have a nickname? Some folks call these the Nasties! A few of the crowd-favorite Nasties include the common Nasturtium (T. minor), the Indian cress (T. majus), the Shield Nasturtium (T. peltophorum), and the Canary creeper (T. peregrinum).

The symbolism of nasturtium flowers in the Victorian language of flowers dates back a few hundred years. In the 16th century, the Nasties were first brought to Europe from an expedition in Mexico.

For many Europeans, this symbolized a successful conquest and victory in battle. This is the reason why its genus name means trophy! The flowers are actual trophies for the Europeans from battle!

The deep meaning behind the Nasties arises from the long history of the Victorian language of flowers. After the many battles Europe faced, it only seemed fit that they returned with a trophy – and in this case, it was the Nasties.

The Nasties have a symbolic meaning of power and victory. Just as vast and powerful as the European nation is, this flower’s simplicity and beauty are perfect for a prize! On another note, these flowers also mean patriotism and unwavering support for the home country’s conquest!

What does a Red Nasturtium Flower Mean?

A maternal love is what a red Nasties flower means. Maternal love can either mean the love of a mother or a love for your motherland! Showing this kind of love can indicate the attribute of being reliable – like any kind of love, can always count on it!

What does a Yellow Nasturtium Blossom Symbolize?

Yellow Nasturtiums symbolize a hopeless kind of love. You would think that all kinds of love are full of hope and a happy ending – but this flower doesn’t mean that. During moments of feeling low, these flowers are a great tribute to symbolize resignation and knowing when to give up. But don’t fret – you can always try again next time! Never lose hope!

What does an Orange Nasturtium Floret Indicate?

An orange Nasties flower indicates the attributes of being charitable. Additionally, these flowers indicate a wondrous adventure and a life full of risk-taking and seeking new activities to enjoy! Just like the expedition that brought these flowers to Europe, being a life adventurer is not far from what it truly symbolizes.

What is the Cultural Significance of Nasturtium Blossoms?

In the Chinese art of Feng Shui, the Nasties are believed to be harmonious flowers. According to the arts, the flowers have mystic powers that can harmonize the energies between buildings and the foundation of land it sits on. It brings balance and peace to the environment.

During the unfortunate events of World War II, the Nasties played a very important role as a food staple. Popularly associated as the greens of Trojan warriors, the Nasties served as a spice substitute for black pepper during this time!

What are the Folktales Associated with Nasturtium Florets?

The intriguing folktales about the Nasties differ from one belief to another. In some cultures, the Latin genus name was said to have a dark past. The red Nasties that came to be were from the blood of a dying Trojan warrior!

Meanwhile, the Victorians have a rather different tale to tell about this flower. Victorian women were said to have used the Nasties as their tussie mussies. What is a tussie mussie? It’s a kind of bouquet arranged in concentric circles! Adorning Nasties on tussie mussies were believed to ward off foul smells!

What is the Spiritual Influence of Nasturtium Blossoms?

The floral essence of Nasturtiums offers numerous rays of spiritual influence. Having mental blocks or zoning out? These flowers assist in clearing mental blocks caused by grief and stress. In some cases where clearing such blocks does not work, the flowers initiate change by giving the strength and courage needed in the process.

In general, the presence of these blossoms reminds one to cherish their independence and uniqueness. These flowers are the embodiment and reminder of expression and freedom.

What does a Nasturtium Floral Tattoo Symbolize?

In the most common sense, you already know what a tattoo of this design symbolizes. It obviously symbolizes conquest and victory! Victory does not always have to be in the form of a battle against another. This kind of victory can also symbolize self-improvement and progress – being better than the last version of yourself!

Nasties are a fun favorite as an ornamental flowering plant. Many plant lovers grow these blooms in their edible gardens! You read that right, edible! The blossoms are popularly used as a fresh garnish in salads and dishes. The leaves are also used as greens in fresh salads! It is enriched with vitamin C and adds a peppery flavor when garnished in salads.

The flower buds are also edible like the blossoms and leaves. It is popularly picked and used as a substitute for Capers! In the Andes mountain ranges of South America, the Mashua (T. tuberosum) is also popularly used as a food substitute for potatoes!

There are also several folkloric medical uses for the Nasties. For the Indians in Peru, the leaves were used for treating common ailments such as coughs, colds, and the flu. Since the leaves contain high amounts of vitamin C, it acts as a natural antibiotic and is commonly used as a poultice for cuts and wounds. A word of warning that it’s a must to always consult a medical professional before using this plant or any part of it for medical purposes.