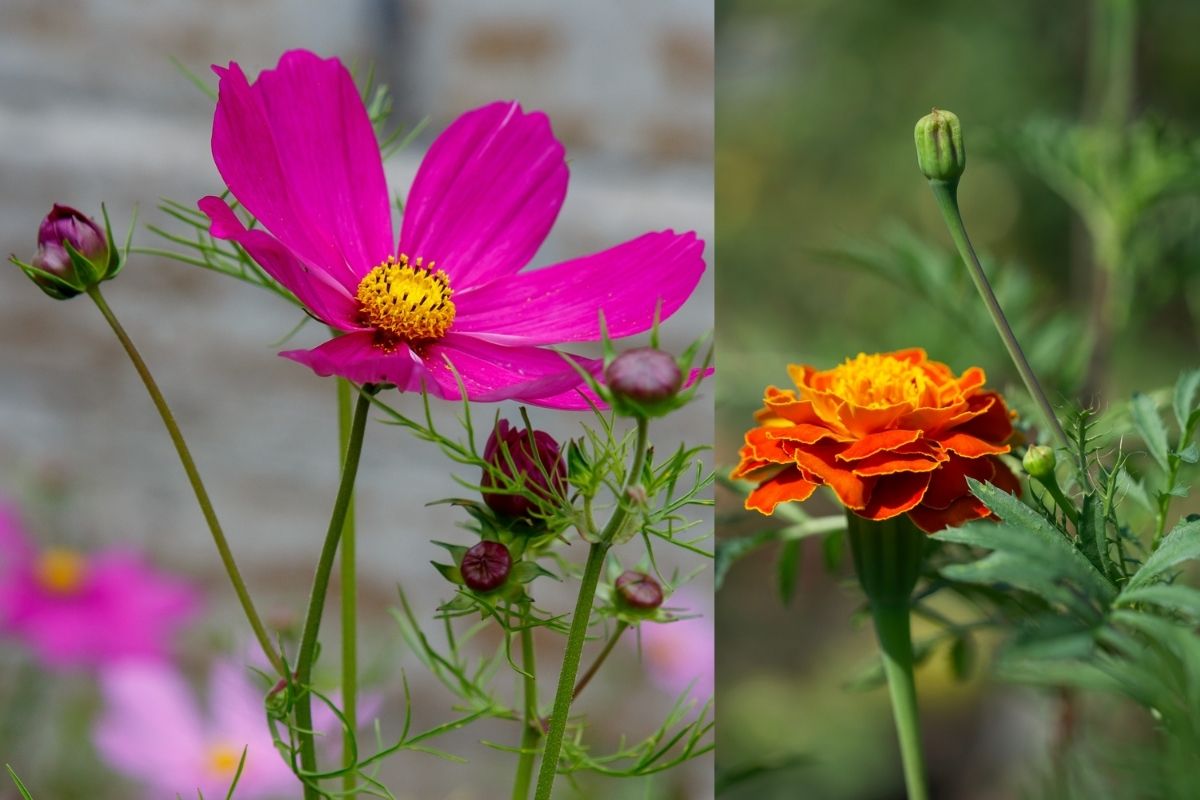 Spooky October has come and Autumn has finally set in – leaves turn a light yellow and fall off from the trees and the wind’s breeze gets a little bit cooler. And what better way to show the season’s festivities than with a Cosmos and Marigold flower?

Besides the birth month flowers of October, a lot of festivities make this month truly spectacular! There is the famous time of Halloween at the end of the month and the celebration of the Holy Rosary. If the month of June is known as Pride Month, then October may also be famously known as the LGBTQ+ History month!

Going back to the traditions of Halloween, it in fact has a bit of a history with the month of October. Halloween was taken from two words put together: Hallow and Eve – Hallow’s Eve. It is an ancient Celtic festival of Samhain indicating the official end of Summer!

For ancient Brits and Irish folk, it is a special holiday that celebrates the link between season and life cycles – the day before All Soul’s and Saint’s Day! No wonder Halloween is a spooky festivity – it’s followed by the customs of praising the dearly departed.

Cosmos is very well known to be a beautiful Cosmic flower of the plant universe! There is a hidden mystery as to why this flower got its name – and the symbolic meaning behind it will answer just that!

The Cosmos is a garden plant with heads of colorful flowers. It was first cultivated by early Spanish explorers who brought flowers and seeds back from their missionaries in Mexico. This annual herbaceous plant includes 40 other species widely to Mexico and some regions in Central and South America.

Some say that the Cosmos may have something to do with the creation of the universe. Surprisingly, this flower is also related to other popular flowers such as the Daisy and Aster – no wonder these blossoms have an uncanny resemblance!

The flower belongs to the genus Cosmos of the Asteraceae family – it is distantly related to Daisies, Asters, and even Sunflowers! Its genus name was taken from the Greek word Kosmos meaning beauty, harmony, and an orderly universe.

Cosmos flowers are also often called the Mexican Aster. If you put each flower side by side, you would see the striking similarities and both of their radiating beauty! From the central bud to the color and shape of the petals, it is no wonder these two flowers are designated birth month flowers of September and October!

So how do these flowers mean beauty, harmony, and an orderly universe? Here’s a secret – it lies within the blooming of its petals and the radiance of its colors!

What is the Symbolic Meaning of the Cosmos?

Here’s what to know about Cosmos symbolism:

Many cultural traditions have associated different symbolic meanings for the Cosmos. In fact, countries such as Japan, China, and India give high regard and meaning to these blossoms.

It’s very well established that Cosmoses are flowers of the divine universe. The key traits of the universe which are beauty, harmony, and orderliness are gracefully symbolized by such flowers. Aside from stating the obvious, what else could a Cosmos symbolically mean?

Since it is the birth month flower of October, Japanese cultures have also associated the Cosmos with the Autumn season. Their tradition is to hold celebrations in a festival known as the Cosmos Festa held each year in Higashi Sunbin Flower Valley. Around 10 hectares of the land area are covered in the beauty of Cosmos! Truly a tourist attraction in Japan to see when traveling in October!

In Chinese and Indian cultures, a shared symbolic meaning is associated with the Mexican Aster. Historic Indian cultures speak of the Cosmoses as a flower symbolizing a two-fold manifestation of the universe – the good and evil. Ancient Chinese cultures also view this flower in the same way but as the Yin and Yang of Chinese Feng Shui.

Other cultures also preach of the spiritual enlightening the Cosmos behold. It is the universal manifestation and divine link between the heavens, the earth, and the underworld.

Marigolds are yet another birth month flower of October because of the colors it comes in – red, orange, and yellow! Coincidentally, the colors represent the Autumn season and Halloween which is simply perfect for this month!

The Marigold is a plant with composite flower heads and solitary or clustered stems. What is so interesting about these flowers is that their floral head looks like a bob! These flowers are either annual or perennial garden plants with around 50 species.

The flowers are native to Central America and Mexico – quite similar to the Cosmos! Surprisingly, the two flowers are also distantly related since both the Marigold and Cosmos come from the same family – the Asteraceae family!

The pot Marigold may have a few similarities with the true Marigolds – both actually belong to the same family! The key difference between the two is that pot Marigolds from the genus Calendula are native to Eurasia and Africa!

The genus of the true Marigolds is taken from the Latin word Tages – a beautiful name of an Etruscan deity. Meanwhile, the genus pot Marigolds takes its name from a Latin word called Calendae meaning the calendar flower or the first day of the Roman calendar.

The name Marigold takes after a different origin. It is a combination of the name of the Virgin Mother Mary and the riches of gold – Mary + gold! Now, you won’t wonder why these flowers bear special symbolic meanings. Other names the Marigolds go by include Mary’s gold or the Mary bud.

What is the Symbolic Meaning of the Marigold?

Here’s what to know about Marigold symbolism:

The most beautiful thing about Marigolds is that a lot of cultures view it as a symbol of the sun. It is the flowering sun because the blossoms only bloom early in the morning and half past the afternoon!

Marigolds are also known as the Herb of the Sun. This name is symbolic of the journey of the Sun through the sky. Historic Indian culture also regards these plants as sacred herbs because their traditional practices strung the flowers in garlands offered in temples and shrines.

Not only do the petals’ bright color symbolize the sun, but it also symbolizes the crown on Mother Mary’s head. It was said that the poor who could not afford real gold instead offered to the Blessed Mother this flower which looked like gold.

Contrary to this, Irish locals believe that cultivating this flower is a symbol of protection from the enchantment of fairies and evil influences.