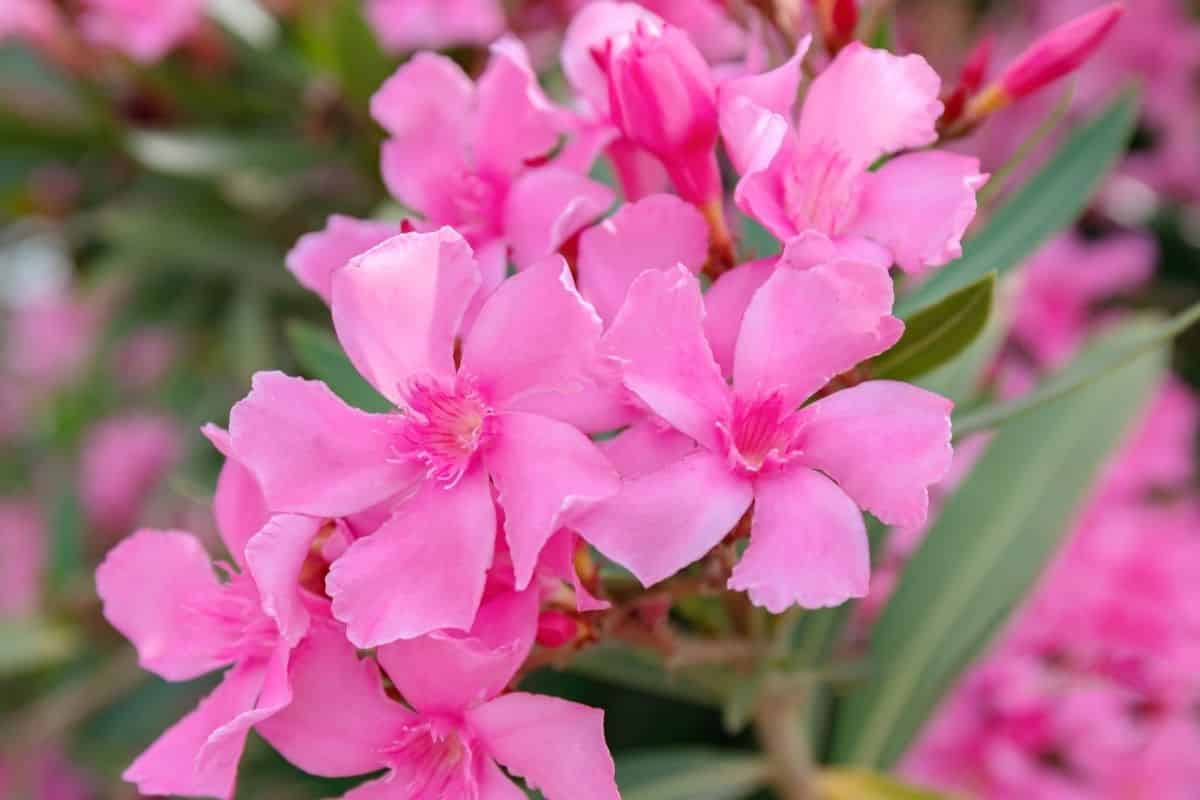 Did you know that the Greeks had another common name for Oleanders? Being distantly related to another genus from the dogbane family, Oleanders were also referred to by the ancient Greeks as Rhododendrons. If you take a closer look at these flowers, it simply is as unique as their name!

The Oleander can go about several names such as Rose bay, Nerion, or even Rhododendron. It is an evergreen perennial garden shrub native to North Africa and Southwest Asia. Pliny the Elder first describes this plant as having rose-like flowers but with poisonous qualities!

The major species of the Oleanders are scientifically known as common Oleander Nerium oleander. The scientific name derives from the Greek words Neros meaning growth in a wet habitat and Olea meaning olive.

The first mention of the Oleanders came to light in 1545. Surprisingly, the earliest known records for the cultivation of this plant actually date back to 3,400 – 2475 B.C. along the banks of the Nile River. The flowers come from the genus Oleander which is a part of the Apocynaceae or dogbane family.

The ancient Greeks have an interesting story to tell about the Rose bay floras. According to the myth, a man whose name was Leander fell deeply in love with a beautiful Greek maiden. Driven with the passion to see his love, he traveled the sea to get a glimpse of her beauty.

Tragedy struck as the man drowned at sea and washed up on the shore. Devastated upon the sight of his lifeless body, the maiden screamed “Oh, Leander! Oh, Leander!” and out on his open hand came the flower that is known today. The maiden planted its seeds symbolizing their undying love.

The most distinct meaning of Rose bay flowers is the message of caution and be wary. According to some folk, these flowers are a sign of distrust with someone you think you trust or imminent danger is lurking nearby. Seeing these flowers will have you think twice before being comfortable with the environment and those around you!

What does a White Oleander Flower Mean?

White Rose bay flowers signify truce and peace during times of disharmony. Whether the disharmony is within you or with a dear friend, offering this flower sends the message of declaring peace.

What does a Red Oleander Blossom Symbolize?

Love and passion are symbolized by red Nerion blossoms. The deep shade and sweet fragrance of this flower are sure to keep the love alive! Distinct from these symbolic meanings, a red Rose bay flower also symbolizes death and mourning.

What does a Pink Oleander Floret Represent?

Rose bay florets with pink petals are a sweet sight to see! Not only does it embody feminine beauty and grace, but it also symbolizes one’s spiritual healing and cleansing. Aside from this, it also denotes a woman’s chastity.

What does a Purple Oleander Bloom Indicate?

The attributes of great strength and bravery are represented by purple Nerion blooms. It also stands as a herald blossom of inspiration and devotion.

What is the Cultural Significance of Oleander Flowers?

According to Italian hearsays, bringing or bestowing such flowers inside a home is an omen for disgrace and misfortune. It also meant that one is casting an illness upon the other. Whatever you do, keep these flowers just simply outside in the garden or on the front porch!

What is the Biblical Significance with Oleander Blossoms?

Amidst the negative message Oleanders meant for the Italians, the Spanish believe in a more spiritual idea. The Oleanders were known to be adorned onto the staff of St. Joseph. Upon the announcement of an angel that he will be the husband of the Virgin Mother Mary, the flowers were said to have magically appeared onto his staff!

During times of sickness, a desperate mother prayed to St. Joseph for the recovery of her ill daughter. It was said that a branch of a Rose bay was seen on top of the girl after her mother’s prayer. The girl was then miraculously cured of her illness.

What does an Oleander Floral Tattoo Symbolize?

Oleander flowers are quite unique of a design to tattoo onto the body. Only those with a strong heart and inward confidence and beauty choose this design because that is what Oleander tattoos symbolize!

Although Oleanders are beautiful as they are fragrant, it is actually a toxic flower to be cautious of! It is commonly used as a floral ornament in gardens and parks.

Traditional medicinal claims say that the flowers contain oleandrin which is used to treat patients with certain heart problems. The bark and leaves are also claimed to treat certain skin diseases when made into a decoction after extracting its oils.

Meanwhile, the boiling of leaves of Nerion plants is said to treat malaria and reduce body swelling if consumed by boiling. It is also known as a method for inducing abortion. The flowers are said to also cure severe headaches. A word of warning that it’s a must to always consult a medical professional before using this plant or any part of it for medical purposes.