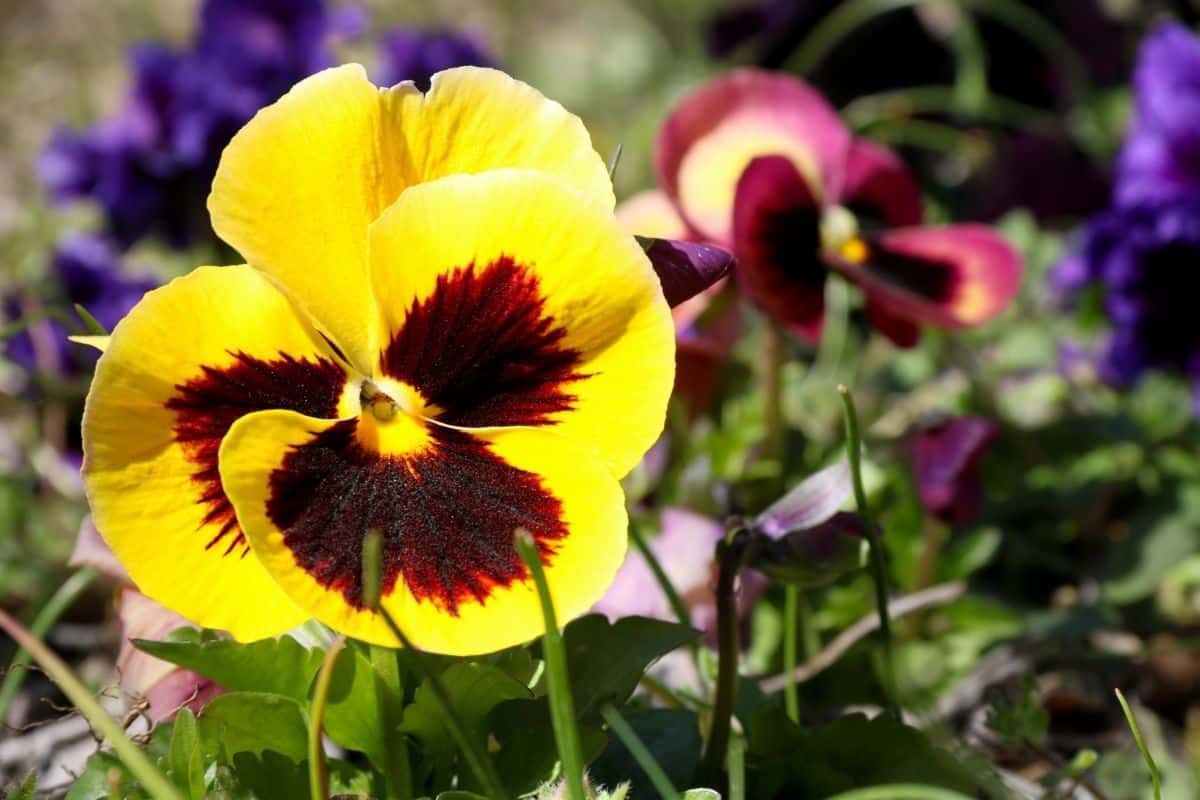 When you take a first look at these flowers, you are surely in for a surprise! If you use your imagination, you would likely see a small face staring back at you! Yup! Pansies are known as flowers with the shapes of a face.

History of the Pansy Flowers

The Pansy floral name was first used in the 15th century. It was derived from two languages. The more recent origin is the French word pensée meaning one’s thoughts. The latter originates from Latin pensane meaning to weigh in or consider.

Pansies are a common garden plant scientifically known as Viola tricolor. The genus Viola comprises the Violaceae family with 23 other genera. The recent species of today involve the hybrids of Pansies and wild Violets which are either perennial or annual depending on the region.

In earlier times, the pansies had old-folk names wherein some of which have a story to tell. These names include Johnny-jump-up, heartsease, and love-in-idleness.

Pansies hold behind its face a few quite astonishing symbolism beliefs. For traditional lores, it was believed that the orientational display of these flowers had a symbolic meaning. Upright Viola flowers symbolized one thinking of another while an upside-down one held the opposite symbol of being forgetful. Consequently, these flowers also symbolize the betrayals that haunt you.

Amidst being the perfect flower to bestow upon people in love, it was also sadly a floral component of Ophelia’s dying bouquet. You’d want to think twice now before using these flowers then!

The Pansy blossom is also dedicated to Saint Valentine. It embodies happiness and contentment with all that life has to offer.

The Pansy flower holds with its name several beautiful meanings. A general sense of these flowers includes one’s pleasant thoughts or the advice of taking some things into consideration.

In the language of flowers, Pansy’s delicate features evoke the ideas of tranquil movement and the motion of time and constant change.

What does a White Pansy Flower Mean?

White Pansies behold the meaning of being pleasant and innocent. It is also associated with the purity of oneself.

What does a Red Pansy Blossom Symbolize?

Viola flowers with red petals are symbolic of one’s love and burning passion. It represents the genuine desire for affection and intimacy.

What does a Pink Pansy Bloom Indicate?

The attributes of kindness and modesty are indicated by the display of pink Pansy florets. It holds true to the pure and genuine feelings of the heart.

What does a Purple Pansy Floret Mean?

Loyalty and acts of gentleness are the hidden meaning behind a Purple Heartsease. It is symbolic of one’s good intentions and thoughts.

What does a Blue Pansy Blossom Represent?

A blue Pansy blossom represents the clarity of one’s mind and spirit. Aside from this, it also shows the in-depth internal reflection within you.

What does a Yellow Pansy Flower Symbolize?

Feelings of release are symbolized by yellow Pansies. Upon releasing whatever holds one back, the merry moments of tomorrow are bound to come your way.

What does an Orange Pansy Flower Mean?

Orange Pansies offer one the surge of inspiration and a sense of mental and spiritual healing.

What is the Biblical Significance of Pansies?

The English folk refers to Pansies as the Herb Trinity. They believed that the original floral colors of yellow, white, and purple represented the Holy Trinity.

According to tales of old, the flowers were admired by people around the world for their fragrance. Filled with grief over the death of the grass around them due to flocked admirers, the blossoms all bowed down to offer a prayer pleading to God to rid them of their admired fragrance. God then heeded their prayer and allowed the flower to remain beautiful and admirable even without the sweet scent.

What is the Cultural Importance of Pansies?

In the financial capital of Japan, Osaka honors the Viola blossoms as the state official flower.

Meanwhile, in Northern France, the French associated white Pansy blooms with death and are not to be included in bouquets offered to the living.

What are the Folklores Associated with the Pansy?

The other more common name for the Pansies is Heartsease. According to old folklore, it meant merriment and thoughtfulness and was believed to be nodding with deep thought during the beginning of August.

In the realm of love and passion, the Pansy was also referred to by Shakespeare as Cupid’s flower of purple dye. Legend has it that the flower’s petals were originally milky-white until Cupid struck it with his bow and arrow giving it that purple shade. This floral color endowed it with what was said to be magical and spiritual properties.

The magical powers of the flower’s petals had the amazing ability to heal their broken hearts and are used as love potions for hopeless lovers. These flowers were also said to aid with the grief over the loss of a loved one.

What does a Pansy Floral Tattoo Symbolize?

Pansies are frequently used as garden container plants for cut flowers for their beautiful display of colors. In traditional medicine, the Celtics used the flowers as a tonic for a love potion. Consequently, it was also brewed as a tea infusion for respiratory conditions and convulsions with a high fever. The flowers are also claimed to treat skin ulcers and cancers once steeped into an essential oil.