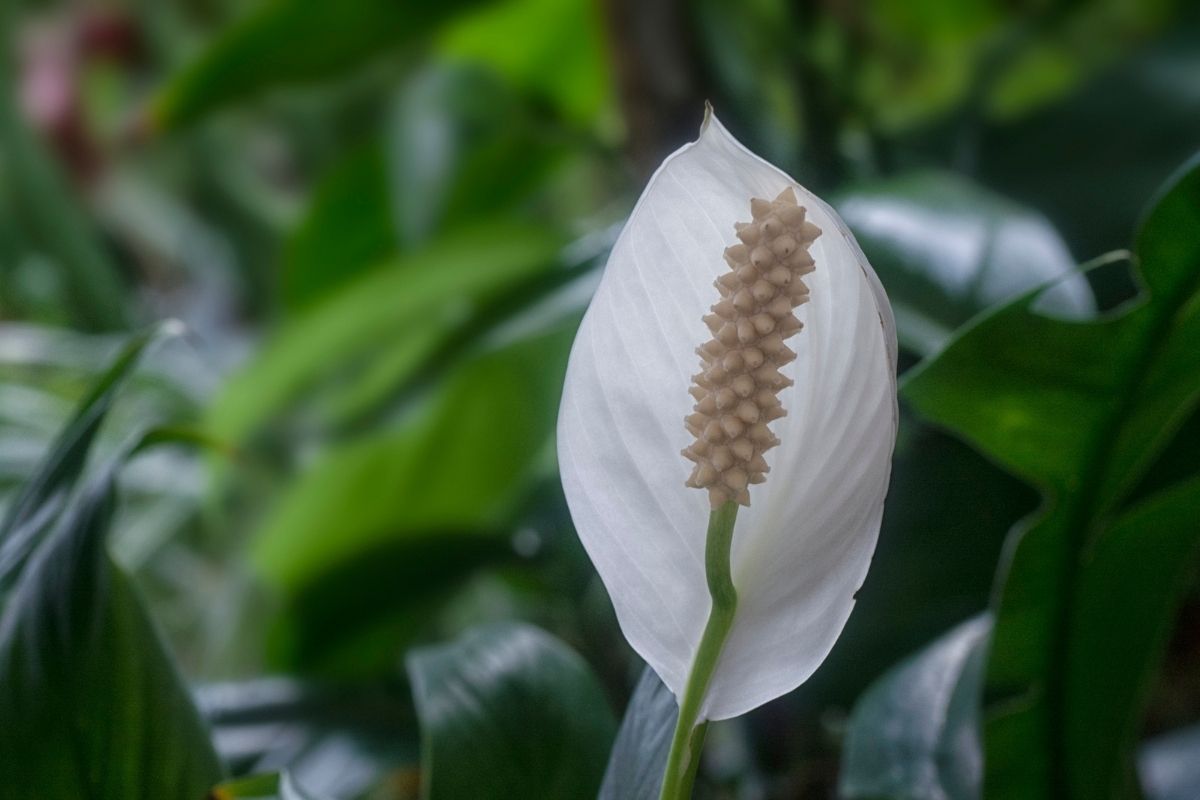 The Peace Lily is a flower appearing almost like the exact likeness of Anthuriums. Both are composed of the green velvet-like leaves and the beautiful embracing spathe which surrounds the spadix. The meanings and symbolism associated with these plants are as elegant as the flowers you see!

The Peace lily or collectively known as Peace Lilies are perennial evergreens native to the tropics of Central America and Southeast Asia. The layman name Peace lily was first used in the early 1950s to describe a beautiful ornamental indoor plant.

It belongs to the genus Spathiphyllum which is also another name this flower goes by. This genus also includes a little over 50 other amazing species and originates from the Arum or Araceae family.

The Latin name Spathiphyllum derives from Greek words spathe and phyllum meaning a leaf from a leaf-like flower that pertains to the velvet spathe surrounding the spadix. Aside from this, the Peace lilies are also popularly called the Peace plant or Spath flower.

The discovery which created the fame of this flower dates back to 1824. German plant collector Gustav Wallis brought back from his expedition in the Colombian jungles the Peace lily to add to his collection.

Several symbolic meanings are beheld by the Spath flower. More common than not, these flowers symbolize harmony and tranquility because of their silk-like white-colored flowers and majestic appearance. These beautiful white flowers also embody chastity and innocence following the image and likeness of the Virgin mary.

Unsurprisingly, the Spath lilies are popular ornamented as flowers during funerals and on some rare occasions, on the bridal bouquet or decorations during a wedding. Its floral structure is as rare as one sees it because not many flowers actually look like it! In the modern language of flowers, the flowers mean truce and balance.

What does a White Spath Lily Flower Mean?

A white Spath flower sends the meaning of purity and innocence. It resembles the holiness and rebirth of Christ after His death on the cross.

What does a Green Peace Lily Blossom Symbolize?

What does a Red Spath Lily Floret Represent?

Red Peace plants or lilies represent one’s sacredness and royalty. It signifies the strength of bonds in love and affection.

What is the Cultural and Spiritual Significance of Peace Lily Blooms?

Chinese Feng Shui experts have several inspirational things to say about these elegant flowers. Usually, it is presented as a bouquet or garland to people who are grieving and mourning over a loss of a loved one.

Peace plants are popular for their low maintenance and light requirement needs, so it’s really a great indoor plant for those who forget to water their plants! In Feng Shui, it is believed that Spath flowers reduce disturbing noise and pollution in the atmosphere by absorbing the bad vibrations and converting them into good chi.

What is the Biblical Meaning Behind Spath Lily Blossoms?

In the many beliefs of Christians, the Spath flower along with many other flowers, is associated with the image of the Virgin mary. It is symbolic of various biblical events such as Mary’s Annunciation and the rebirth of Christ in Easter. Aside from this, it also embodies the Virgin Mother’s chastity and sacredness.

Moreover, these blossoms are also symbolic to confessor saints. Upon their natural death, the flowers symbolize loss and their pure spirits. Surprisingly, these flowers also represent the passing of one’s soul into heaven and are laid to eternal rest.

What does a Spath Floral Tattoo Symbolize?

The floral Spath lily is already known to be symbolic of harmony and tranquility. It also includes the purity and innocence of the Virgin Mother. A floral tattoo design of this choice embodies one’s hope and positive thinking. It sends the message that there is something to always look forward to in life.

Spath lilies are famously adored as indoor ornamental flowers for their luscious green leaves and exquisite flowers. The way you can use this flower aside from an ornamental just might surprise you too!

In the National Aeronautics and Space Administration (NASA) Clean Air Study, the Spath lilies were discovered as one of the best indoor purifying plants! As it was believed in Feng Shui, these blooms can successfully remove harmful air pollutants such as benzene, formaldehyde, and ammonia.

Other toxic gases it can purify include trichloroethylene, xylene, and toluene. So much for just being a just pretty flower, who knew it was also this useful! These flowers are better than your everyday machine-based air purifier!

Aside from being an air purifier, the Spath lilies also include a few medicinal benefits. Some known species of the Spathiphyllum can have its spikes and young leaves can be boiled and eaten as a vegetable. It can also be dried and added to certain tobacco products to add a fragrant aroma.

Spathiphyllum flowers contain the compound calcium oxalate crystals commonly present as kidney stones in the body. A word of warning that it’s a must to always consult a culinary specialist before using this plant or any part of it for cooking purposes.