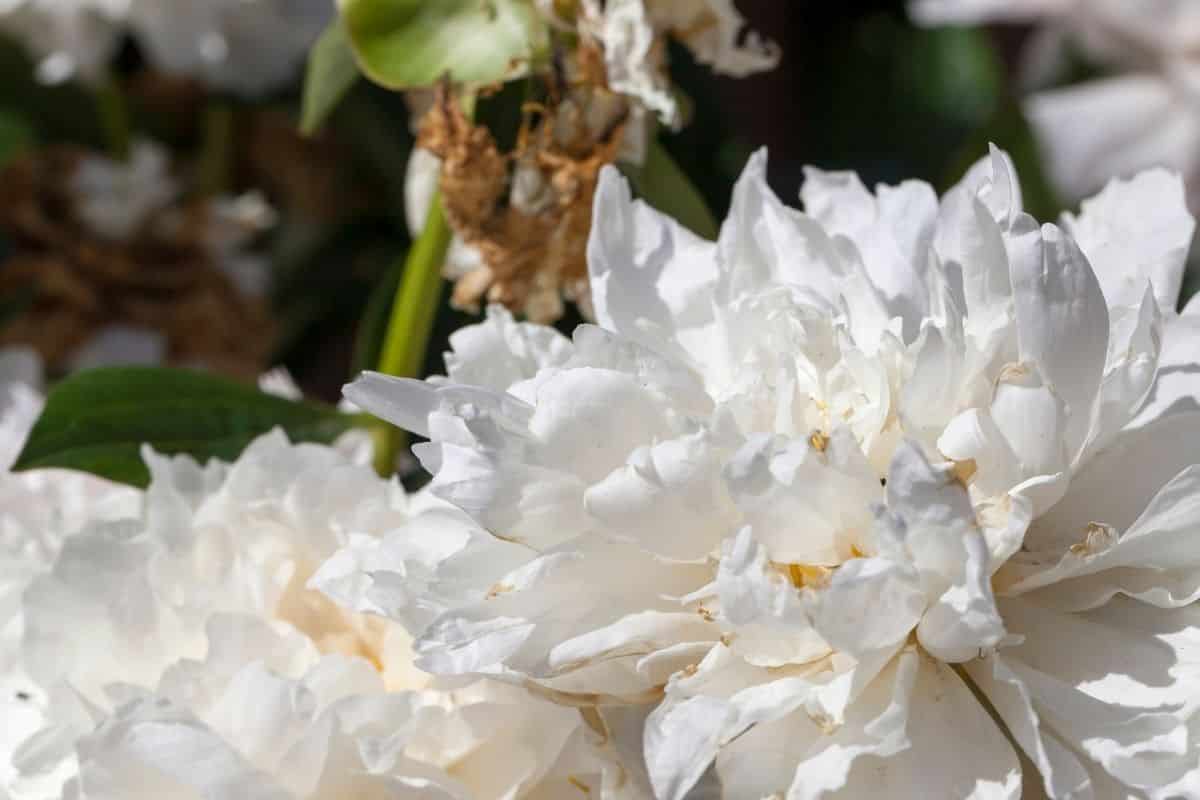 You might be thinking this is pronounced like puny – but it isn’t! It is nowhere sounding like puny or looking like it! Truly, there is a very fascinating meaning and symbolism behind the beauty of the Peony flower. The mystery behind it is so intriguing – its wonders are known to be as the healer of the ancient Greek gods!

The Peonies are said to be Roses without thorns! There are quite a few hidden secrets behind the petals of the Peony and it’s best if you keep reading to know what they are! You might just find yourself enjoying this and growing Peonies in your garden and indoor floral decors!

The Peony or collectively called Peonies made its debut definition in the 14th century. It is a perennial flowering plant with double petalled flowers. In fact, these flowers are one of the most common ornamentals in the floral industry!

The Peonies are a part of the genus Paeonia of the Paeoniaceae or the Peony family. There are about 30 wonderful species of this plant where a majority of which are native in regions of Europe and Asia!

The Peony or Paeony comes from an array of words such as the Anglo-French word Peonie or Pioiné, or the Greek word Paiōnia. And what could this possibly mean? These words are actually referring to the mythological physician of the gods – Paiōn Paeon!

Unlike other flowers, the Paeony is classified into three distinct floral groups – the herbaceous Eurasian Peonies, the Asian tree Peonies, and the North American Peonies. Some of the gorgeous species from these groups include the Chinese Peony (P. lactiflora), the European common Peony (P. officinalis), the Brown’s Peony (P. browni), and the California Peony (P. californica).

The first bloom of the Peony flowers symbolizes forthcoming good fortune and compassion. It is the embodiment of love, prosperity, and peace. Once it finishes blooming, some say this moment of beauty represents attributes of honor, valor, and nobility.

There is also an eastern and western saying about the symbolism for this flower. The eastern culture symbolism of the Peony is masculinity and brightness while the western beliefs say this is a symbolism of boldness and prosperity.

The meaning behind Peonies is not quite what you would expect to be. In the Victorian language of flowers, this flower meant granted powers to keep a deep secret!

What could this deep secret be? A deep and passionate feeling of love and affection! Oddly enough, if this was not the secret someone intended to keep – well this flower means entirely something else. That could either be an embarrassment or shame!

What does a White Peony Flower Mean?

A white Peony flower conveys the meaning of young girls who have a very distinguished beauty and uncanny sense of humor!

What does a Red Peony Blossom Symbolize?

Red Peony flowers are symbolic of the female genitalia and the morning dew representing semen. Some say that this symbolism is associated with love and procreation.

What does a Pink Peony Floret Indicate?

Luscious pink Peonies indicate two of the possible best things in life – a happy marriage or relationship and well, a happy life!

What does a Yellow Peony Bloom Represent?

Yellow Peony blooms have a very positive and energetic representation. Like all great things, these flowers present good health and are known as an aphrodisiac!

What does an Orange Peony Flower Symbolize?

Paeonia flowers with orange petals are symbolic of bashfulness and strong feelings of anger and resentment.

What does a Purple Peony Blossom Mean?

Prim purple Peonies send the meaning of grace and refinement. With their double petals arranged so delicately, these flowers are a sight to truly enjoy!

What is the Cultural Significance of a Peony Flower?

Peony flowers are very well-loved across the globe – these flowers even have symbols from the east and west parts of the world!

In Europe, the Peonies are common floral motifs of a romantic love stone. European folks often used the flowers in wedding festivities and in celebrating anniversaries.

For the traditional Chinese, the Peonies are symbols of good luck and are often decorated in home offices for good work and accomplishments!

Japanese folk also regard Peonies as imperial flowers. It is a floral emblem of Summer and is commonly associated with the peacock. For the Japanese, these symbolize spring, fertility, riches, and dignity.

What is the Biblical Meaning of a Peony Bloom?

Now, the biblical meaning of a Paeonia bloom isn’t exactly stated in the Holy Bible. In truth, quite a few devout Christians have come to believe that this flower is associated with the Holy Spirit.

This is because a few certain species bloom during the Holiday season and that its trefoil leaves stand for the three holy figures – the Father, Christ, and Holy Spirit.

A European Christian festival is celebrated yearly with these flowers as the main ornamentals. During the Whitsun feast or the Christian Pentecost after the Seventh Sunday of Easter, Peonies take the floral limelight and are fabulously decorated in all churches with their petals!

What is the Spiritual Influence of a Peony Floret?

The essence and mere presence of a Peony has a very strong influence on the environment and self spirituality. Its double petaled beauty and magic offer an inner spiritual cleansing and healing of the mind and body.

It removes all emotions and weights of past burden and trauma bringing forth only good health and fortune. After prospering with this, the floral essence will provide a sense of protection and confidence that can help ensure peace and serenity within.

Alas, once in full bloom and fully awakened the Peony will reveal that all the luxury and success in life lies not only in wealth but most especially in health!

What is the Folktale Associated with a Peony Blossom?

Peonies are no doubt the most favorite florals of the traditional folk in China. Some Chinese folks have then come to believe that having Peonies in homes will influence positive energy for the man and woman to live together in harmony.

Although the same harmony does not apply to old age couples because this can entice cheating of the man or woman on younger partners!

Another folktale focuses on the magical creatures of ancient times. It was said that several mischievous nymphs hid in the petals of Peonies because of their bashfulness and shame! Exactly where some of the meanings and symbolism came from!

An ancient Greek tale tells of the journey of Paeon. The story says that before becoming the physician of the Gods, he was first a bright student of Asclepius, the God of healing and medicine.

What does a Peony Floral Tattoo Symbolize?

The various traditions of the Japanese transcend from ancient times and are very well-preserved until today. The Peonies in ancient Japanese tattoo art symbolizes a daring and masculine personality – for women! Now, for all the daring women who choose this design in the modern day would want to symbolize their nobility and bravery!

Peony flowers are one of the favorite florals in wedding bouquets and vases! Its double petal design bearings its many meanings and symbols are such a catch aside from its true beauty.

In Chinese traditions, Peonies also have some folkloric medicinal benefits. The roots of certain Paeonia species are one of the most important crude drugs in traditional medicine for over 1,500 years!

It contains analgesic, sedative, and anti-inflammatory properties that have been used as a remedy for cardiovascular diseases and improving blood circulation. The roots were also used as a treatment for menstrual disorders such as amenorrhea, dysmenorrhea, and dyspepsia.

Meanwhile, folkloric European medicine also utilized the seeds of common Peony in treating a variety of diseases and disorders. These include epilepsy, arthritis, stomach pain, cold coughs, and skin disorders.