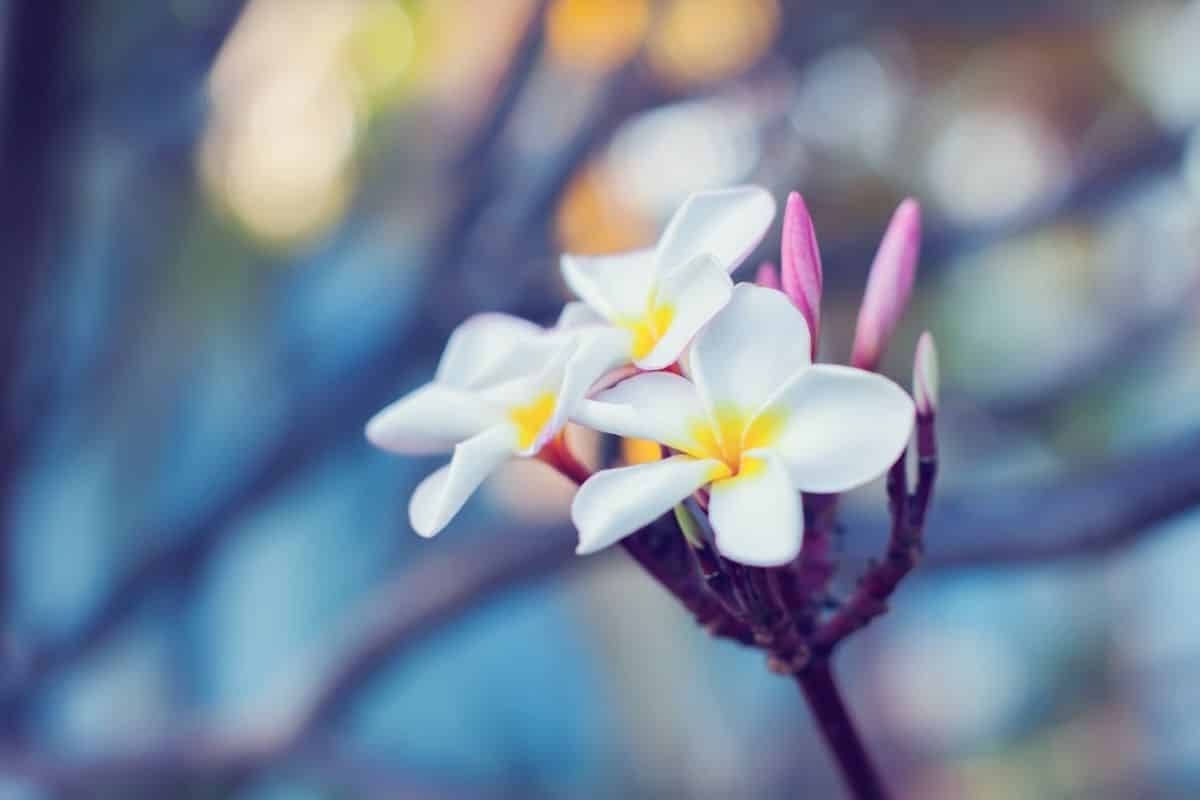 You may come across the Plumerias decorated with Hibiscus flowers in traditional Hawaiian leis. Or perhaps even remember its fragrance in some lines of cologne and perfume like the Jasmine flowers!

These blossoms beam with beautiful colors and a delicate fragrance that will make a great addition to your already lovely garden and home! Although the meaning and symbolism behind these beauties are what will catch your attention the most!

The Plumerias are astounding flowering plants popularly cultivated as an ornamental. It was first botanically defined in 1734 as a deciduous shrub or small tree with only 12 known species. The flowers were originally native to the New World American tropics.

The blossoms arise from the genus Plumeria of the Apocynaceae or dogbane family. If you try to guess the origin, the Latin genus was actually not derived from any historic Greek word. Surprisingly, these gorgeous flowers were named in honor of the late French botanist, Charles Plumier.

Plumerias also have other famously known names it goes by in different cultures. One of these names includes the perfume name – the frangipani. The flowers acquired this name because of their surprisingly wonderful fragrance!

The floral name was modified in 1675 from the name of a famous Italian nobleman – Muzo Frangipane. He was the first to create a perfume based on the Plumerias! Now you must believe that these flowers are truly full of wonders!

The great Mayans believed that the Frangipani was a symbol of a living breath of all creatures and the life-giving breath from the gods. They deeply respected the power this flower holds according to their traditions and myths! It was believed that the breath was symbolic of the flower’s fragrance – breathe it in upon its bloom and fleeting away once it withers.

In South Indian religious culture, the flowers are known as the Temple tree. The spiritual people around Indian shrines plant this flower around the area symbolizing devotion and peace.

Turning into a more mythological point of view, the Plumerias are a floral motif for the Roman goddess of love and beauty – Venus and the Sun.

There are quite a few awe-inspiring and striking meanings behind the Plumerias. The Hawaiians believe that the flowers meant a new life and creation.

The Plumerias meant the nikté for the Mayans meaning the tree flower. They believed that these beautiful blossoms were a conduit put on Earth.

The flowers were said to be so full of vivifying energy that it was like the living breath of a god or goddess! Iik or the life-giving air was the Mayan word for the breath that they say carries the mesmerizing scent of the flowers through the soft breeze.

What does a White Plumeria Flower Mean?

Just like a new sheet of paper or slate of canvas, a white Frangipani conveys the meaning of a dawning new life.

What does a Red Plumeria Blossom Symbolize?

Passionate Plumerias are symbolized by their luscious red petals. It symbolizes true love and doubtless devotion like no other!

What does a Pink Plumeria Floret Represent?

A pink Frangipani has a similar association to the cultural tales of the Mayans being the breath of life. In fact, another representation of this flower is fertility and beauty.

What does a Purple Plumeria Bloom Indicate?

Desired knowledge and power are the hidden meaning behind purple Plumerias. But don’t be too hasty because these flowers also indicate modesty.

What does a Yellow Plumeria Flower Symbolize?

Yellow Plumerias beam like the Sun on a hot day but with a real sweet scent. This blossom symbolizes the comfort and peace of the dawning new life ahead.

What does an Orange Plumeria Blossom Mean?

Warmth and welcome are the meaning behind the delicate orange petals of a Plumeria bloom. Its hazy color attracts not only admirers but also good energy.

What is the Cultural Significance of Plumeria Flowers?

Hawaiian culture has a very beautiful custom of honoring the many flowers of the world. The traditional Hawaiian floral lei is a popular tradition fondly placed around the necks of friends (and strangers!) to say Aloha! Aloha is a beautiful Hawaiian word both meaning a hearty welcome and a bid of goodbye.

For the more traditional Hawaiians, the Frangipani is a symbol of everything that is good. Its many admirers say that this flower has a deep meaning about love amidst long absence, like a brave tribal warrior out at sea.

What is the Spiritual Influence of Plumeria Blooms?

The Plumeria essence brings about the feeling of comfort by imparting peace and releasing negative tensions. The flowers give off a vibe flowing like a water fountain full of energetic youthfulness and carefreeness! It opens the mind to boundless creativity for divine ideas and inspirational wonders.

The blossoms upon bloom are reminders of freedom. It is a beacon of the healing of estranged relationships.

What are the Folktales Associated with Plumeria Blossoms?

In traditional Mayan folktales, the Plumerias were known through the phrase bak nikté. According to belief, the phrase for these flowers symbolized the divine knowledge, immortality, life, power, and the origin of all creation.

The Mayan Lacandón myth describes how the god K’akoch created the Plumerias. This blossom according to the myth gave birth to the gods – the Sun, the Moon, and the Earth. After all the creation, the new life of Hachakyun descended onto the Earth making it a place to thrive and survive.

What does a Plumeria Floral Tattoo Symbolize?

Hawaiians are very well known for tattooing their bodies with their rich cultural history. This floral tattoo signifies the start of a new life and the burst of Spring. Those who choose this truly believe in the power of rebirth and reincarnation.

The Plumerias are a popular ornamental plant mostly cultivated for its delicate yet fragrant flowers. You would think that you might be able to get a whiff of these flowers during the day, but sadly you can’t. In fact, the sought-after fragrance of the Frangipani is most intense during the cool parts of the night! So if you’re thinking of admiring these blossoms, best do it after dusk!

Apart from its value in the perfume industry, there are a few known traditional medical uses for the Frangipani. The plant has known benefits such as antimicrobial, antibacterial, and anticarcinogenic properties. In traditional Ayurvedic medicine, the flowers are used as a remedy for mental struggles such as anxiety, fear, and insomnia.

Indigenous folk from South America have also used the Plumeria as a traditional medicine to treat worm infestations and malaria. In Brazil, the flowers are a known laxative. Traditionally, Brazilian women also use the flower as an inducer for menstrual flow. A word of warning that it’s a must to always consult a medical professional before using this plant or any part of it for medical purposes.