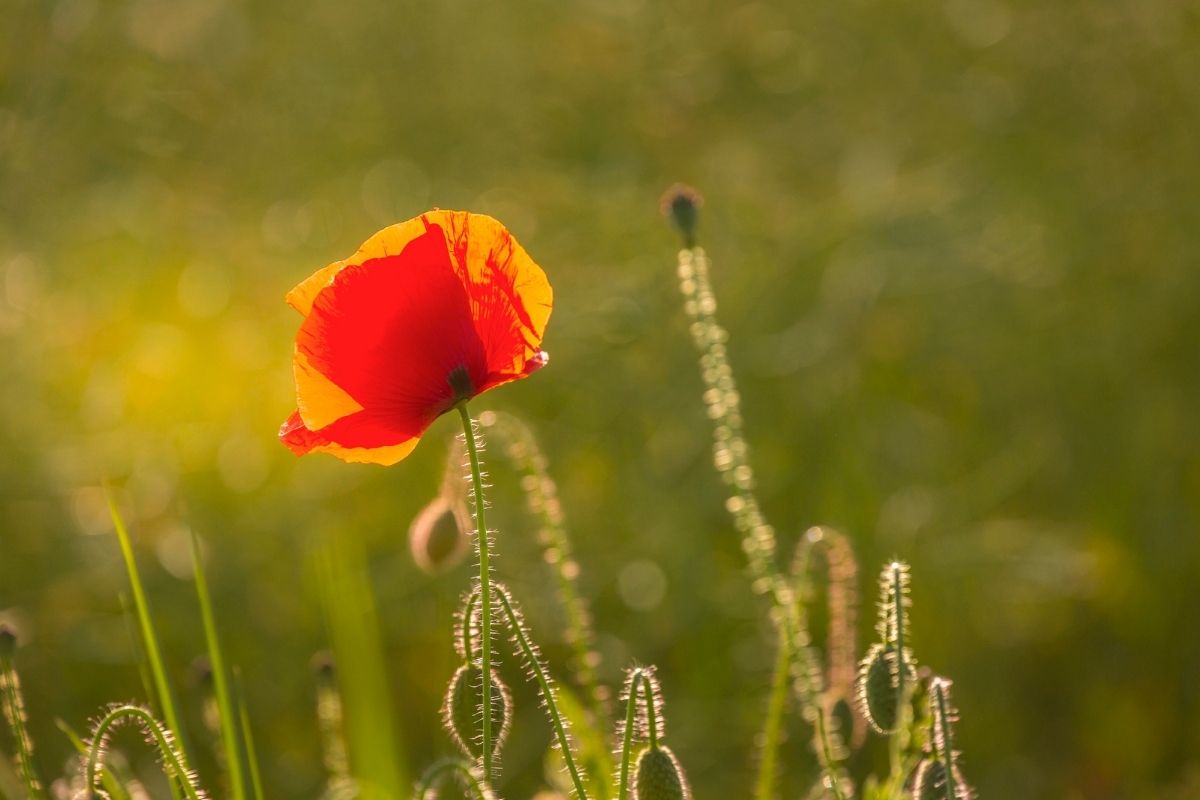 The Poppy itself is quite a popular flower and name for a baby girl! Once you first hear the name of this flower, you would think it’s preppy and well – very poppy-lar! It is though – no doubt about that. With its popularity comes meaning and symbolism not quite what you would expect.

There is a very interesting fact you just have to know about these flowers. And just like any other blossom out there – its beauty is just as addicting as the secret it holds!

Once you understand poppy flower meaning, growing poppy flowers will surely be a new addition to your floral collection!

Poppies first made their debut in the early 12th century. They were defined as either annual or perennial herbs with milky and juicy flowers and capsular fruits. Fun fact – the addictive drug opium comes from the milky white latex of an unripe fruit capsule of an Opium Poppy (P. somniferum)!

The Poppy flowers belong to the genus Papaver of the Poppy or Papaveraceae family. The genus name comes from the Middle English or Old English words Popi or Popig or the Celtic word Papa meaning porridge. The Latin genus name is actually referring to an ancient practice of mixing the plant in food to make children sleepy!

Surprisingly, not all flowers named Poppy come from the Papaver genus. Some flowers come from other genera such as Romneya, Bocconia, Eomecon, and Meconopsis. These blossoms are native to most parts of the northern hemisphere.

Poppies are also florally known as the Corn Rose or Red Weed. Some of the florist’s favorite species include the Oriental Poppy (P. orientale), the Corn Poppy (P. rhoeas), the Leeland Poppy (P. nudicaule), and the Peacock Poppy (P. pavoninum).

Some of the symbols behind Poppies are very distinct from one another. In China, the poppy symbolism is known as the Yīngsù or the Chinese flower of December. It is a Chinese floral emblem of dissipation and evil!

Meanwhile, early Egyptians and Assyrians have a different symbolic meaning for Papaver flowers. They believe it is a floral emblem of blood and a new life! Persians also regard this blossom as a deep symbol of love.

For ancient Romans and Greeks, they highly regards such flowers as sacred and close to the gods. The blossoms are symbolic of the Roman goddess Ceres – goddess of the fertility of crops and Greek goddess Aphrodite – goddess of love and vegetation!

The real meaning behind Poppies is associated with the addictive drug Opium. In the language of flowers, a Poppy blossom can mean a state of peaceful dreaminess and wild imaginations!

Be careful not to get too addicted to its beauty because Poppies can also mean an eternal slumber and falling into an oblivion!

What does a White Poppy Flower Mean?

A white Papaver flower can mean long-lasting peace, grounded virtues, and untainted purity. In Roman beliefs, a white Poppy means consolation. This specific flower was created by Ceres during the search for her daughter – Persephone.

What does a Red Poppy Blossom Symbolize?

If you are looking for a floral to symbolize luxurious pleasures and fantastic extravagance – a red Poppy fits this description perfectly!

What does a Blue Poppy Floret Indicate?

Blue Poppies are flowers that indicate the beauty of inner humility and pure innocence. On another note, it can also indicate mysteries!

What does a Black Poppy Bloom Represent?

A black poppy is actually a deep reddish-brown colored flower – under the light of the sun, it appears black! Papaver flowers of this shade represent the cycle of rebirth, a bid of farewell, and even death.

What does a Yellow Poppy Flower Symbolize?

Yellow is surely a lucky color – especially when Poppies bloom in this shade! It is symbolic of amassed wealth and soaring success!

What is the Cultural Significance of a Poppy Blossom?

Poppies have a very deeply rooted cultural importance for many countries across the globe. These flowers are honored as a symbol of remembrance in allied countries of the United States, Great Britain, France, Canada, Australia, and New Zealand. This movement was inspired by a poem written by Col. John McCrae after the First World War.

Additionally, English-speaking countries also adopted Poppies in the 19th century as the official flower to commemorate Veteran’s Day and remember those who have fallen during the war.

Many believe that these flowers suddenly sprang from the fields of Flanders after the Duke of Wellington’s victory. It was also said to be symbolic of the blood of troops who braved the battlefront during the war.

In France, there is a festival known as Armistice Day. It is celebrated on the 11th day of the 11th month of the year. Artificial Poppies during the feast are worn on clothing to signify peace and the end of the First World War in 1918.

What is the Spiritual Influence of a Poppy Floret?

Poppies have a positive and peaceful influence on spirituality. It radiates with a purity that helps embody universal love. In the process of living a life full of love, these flowers maintain the balance necessary during rapid phases of changes in emotions.

The extremes of physical and etheric levels are balanced. It keeps in check the blending of survival and spiritual aspects of life to create overall harmony.

The presence of Papaver flowers enables one to fully experience the deep levels of serenity and rest. It opens up new horizons that help create a high form of oneself.

What are the Folktales Associated with a Poppy Bloom?

With the deep meaning and symbolism embedded in these flowers, it’s no wonder that a lot of folktales and myths are also associated with them.

In ancient Greece, red Poppies invaded vast fields of wheat and barley. Corn and other grain crops would not sprout and flourish without the presence of these flowers! The famous Greek myth says that this signals the beginning of Spring and the return of Persephone to her mother – the goddess of grains Demeter.

Other folktales tell about the good luck Poppy seeds bring forth when worn on clothing. Some say that wishing upon a Poppy or tucking it under a pillow before bed will answer your deepest desires and wildest dreams!

What does a Poppy Floral Tattoo Symbolize?

Poppy tattoos have a very beautiful symbolic meaning. Those who choose this design want to embody the sacrifice of a loved one who died in war or battle. It represents their memories that are remembered in heart and mind.

In some cases, this tattoo indicates forthcoming good luck and bountiful blessings.

You’ve probably guessed it by now that Poppies are used in many ornamental ways. It can be grown as a garden flower or potted plant. Thinking of sharing these beauties with some friends? Poppies make a beautiful arrangement of cut fresh flowers on bouquets or vases!

There are also other interesting uses for Poppies. During the Victorian era, ladies often crushed the petals of red flowers as a dye for nail color. They also steeped these in vinegar for 10 days as a kind of soothing bath for body itches and rashes.

Aside from the petals, the seeds also have culinary uses! The seeds of Opium Poppies are not only for the known drug. It is actually an important food source of spice flavoring and oil. In fact, the French substitute olive oil for Poppy oil! Some Asian cooking customs also use Poppy seed oil in making delectable sweets!

It can be used in many cooked dishes and baked confectionaries. Most cuisines grind the seeds as a curry spice or fried in butter and added to noodles! These can also be consumed fresh on salads and coleslaw.