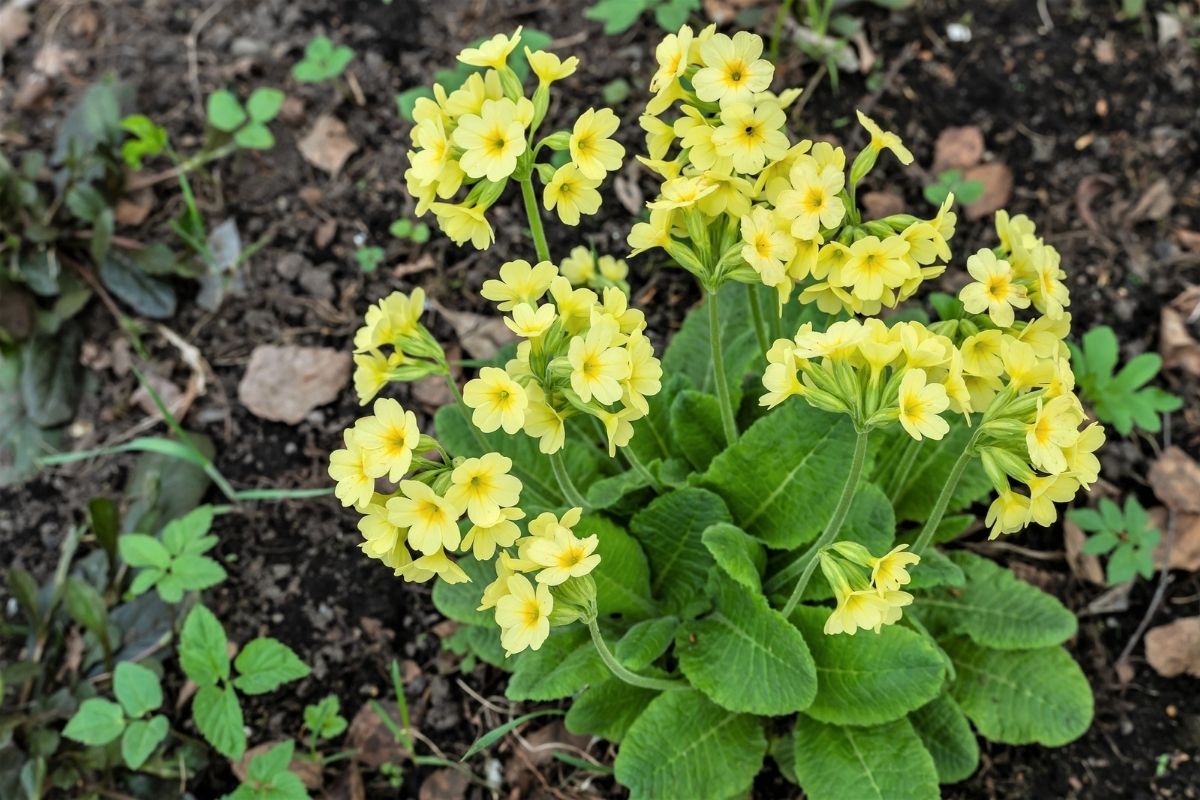 Primroses are one of the most vibrant flowers appearing as the first sign of Spring! You would think of it as a more simple-looking rose, but its beauty is more than just that. It is a classic dainty flower popularly adored in cultural poems and prose. The meaning behind these dainty flowers is surely not to disappoint!

Primrose or collectively known as primroses, is also known as the butter rose, early rose, or golden rose. It was first mentioned in the 15th century as a perennial herb with bright showy flowers. The Anglo-French and Latin name of primrose prima rosa translates to prime rose. The amazing reason behind this is the flower being the first rose of Spring!

The Primroses belong to the Primula genus along with 28 other genera of the Primulaceae family. It is native to Western and Southern Europe and also in some parts of Southwest Asia. In the present day, it is commonly cultivated as a garden flowering plant or cut flowers.

The Primrose is known as flower-bearing with several symbolic meanings. In early Victorian times, the 19th day of April was dedicated as Primrose Day in honor of the late Prime Minister Benjamin Disraeli. Primroses were his favorite flower and are adorned under his statue in Westminster Abbey as a tribute to his memory.

In the language of flowers, primroses have been named the flower of February since they are symbolic of the joys of the heart and youth that are innocent and fleeting. Shakespeare also associated these blooms with lightheartedness and thoughtlessness.

Primroses of any vibrant color embody early youth, young love, and inconstancy. It is dubbed as the firstling of Spring blooming as exquisite flowers with its bright colors.

What does a White Primrose Flower Mean?

Primula flowers with white petals offer the meaning of an early and fleeting youth. A sense of satisfaction is also represented by these blooms.

What does a Red Primrose Blossom Symbolize?

Red primroses sadly symbolize unpatronized or neglected goodness and sadness. It is also symbolic of young and happy love.

What does a Blue Primrose Floret Represent?

Blue primroses send a very special message to those adoring their beauty. The hidden message of believing in me and trust in me is what these flowers represent!

What does a Pink Primrose Bloom Signify?

A pink Primula flower is a significant symbol of womanhood. Aside from this, it also embodies feminine love and beauty.

What does a Purple Primrose Flower Indicate?

The sense of spiritual healing is indicated by the sight of purple Primroses. Seeing a flower of this color also symbolizes purity.

What does a Yellow Primrose Floret Mean?

Happiness and warmth are associated with Primula flowers and their yellow petals! Radiant as the sun, these flowers are sure to brighten up any dull day in the garden!

What does an Orange Primrose Blossom Symbolize?

Orange primroses are regarded as heralds of Spring. Along with the brilliant color of the petals, it also symbolizes cheerfulness and innocence.

What is the Cultural Significance of Primrose Flowers?

The primrose is known in most cultures as a flower for the people. During the Victorian era, Primula flowers were a symbol of high social status and wealth. The Victorians believed it was unlucky to bring such blossoms into a home unless it was more than 13 flowers. Why 13? Simply because in Christian and Norse mythology 13 is an unlucky number!

Surprisingly, the English and Irish folk also believed that planting such flowers near the doorstep attracts fairies and their blessing and good fortune. For the Irish, it was also a popular remedy to treat jaundice and tuberculosis!

For the beliefs of the Celts, primroses are symbolic of otherworldly beauty. In Norse mythology, the flower was attributed to the Goddess Freya who used the flower’s beauty as a key to open the gates of Spring.

What are the Superstitions Associated with Primrose Blossoms?

An old wive’s tale goes on to say that primroses serve as guides for little children who are on the hunt for treasures and fairy gold! It was also believed that keeping this flower on you at all times will preserve your youth! No need to go out looking for the fountain of youth, just keep a primrose with you!

What does a Primrose Floral Tattoo Symbolize?

The choice of a Primrose as a tattoo symbolizes one’s long-lasting beauty and radiating personality. Contrasting to this, it also represents one who cannot live without someone special in their life.

Primroses are popularly known as symbols of youth and hope. Traditional cosmetics used the flower’s petals as an ointment to treat facial blemishes such as wrinkles and freckles. Aside from cosmetics, the flowers also have claimed traditional medical uses.

A tea infusion made from its petals is used as a treatment for nervous disorders and insomnia. Its leaves were also used as an alternative treatment for toothaches and burns. A word of warning that it’s a must to always consult a medical professional before using this plant or any part of it for medical purposes.

The most surprising use for this flower is seen in delicious cuisines! The flowers are garnished onto fresh salads or cooked rice and vegetable dishes. Europeans also made luscious wines, vinegar, and jams from the colorful flowers!