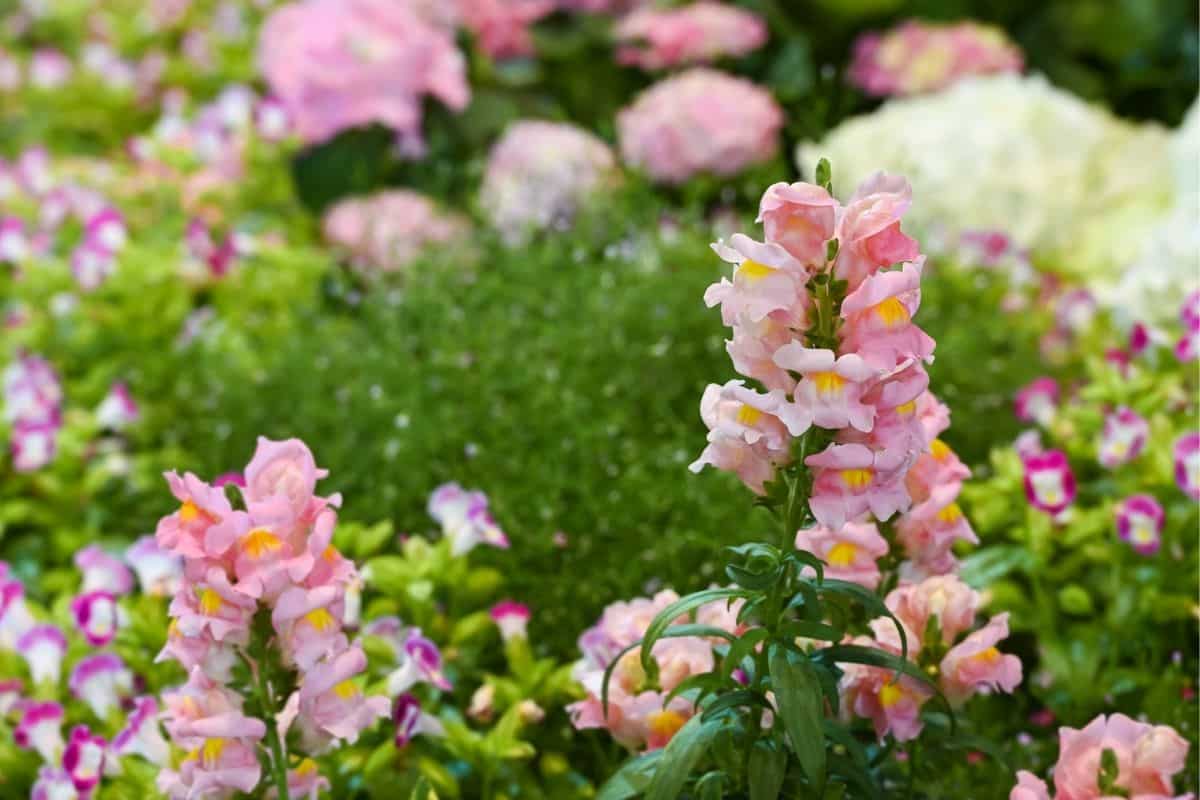 The snapdragon is a very uncommon name to call an ornamental flora in gardens. The first idea you would imagine in your head is the bright red scales and long, slender body of an ancient dragon!

The snapdragon plant was first used in 1573 and is scientifically known as Antirrhinum majus. The genus name Antirrhinum derives from the Greek words anti meaning alike and rhis meaning snout. This derivation meaning like a snout refers to the flower resembling an actual snout of a dragon. It also originates from the Plantaginaceae or commonly known plantain family with only about 20 species in the said genus.

Snapdragons are perennial herbs native to North America and Western Mediterranean regions of Morocco, Portugal, France, Syria, and Turkey. They are known by many names such as rabbit’s lips in Asia, lion’s lips in Holland, or dog flower in India. Their blooms are admired during the months of early summer until late fall when the frost sets in.

The most customary symbol of the Snapdragons is being presumptuous. The reason behind this arose from the medieval fashion practice of women wearing the flowers as hair ornaments. The adornment of such flowers symbolized how women do not want any attention from men. To put it simply, no means no!

Snapdragons not only have associated meanings but also messages it would like admirers to understand. The language of flowers says that Antirrhinum flowers display the beauty of nurture and embrace. May this be in the sense of human affection or the warmth of mother nature, nonetheless, these flowers give a sense of belongingness to those who know how to appreciate.

Such flowers also display as a reminder of the abundance and sparkle for all the good things in life no matter how small and simple they may be. Another reminder this flower implies is that you should be proud of the accomplishments and the progress you have achieved!

With the current situation of the world, it is important to always be proud of yourself. So, don’t forget to give yourself a pat on the back every now and then for a job well done!

What does a White Snapdragon Flower Mean?

Snapdragons with creamy white or ivory white shades give off the meaning of generosity and the embodiment of a gracious lady.

What does a Red Snapdragon Blossom Symbolize?

Red snapdragons offer symbols of jealousy and indiscretion. Who doesn’t lack good judgment and a clear mind during such moments, right? These kinds of colored flowers also serve as a reminder of always having clear thoughts and an open mind.

What does a Pink Snapdragon Bloom Indicate?

Pink blossomed snapdragons embody the inner graciousness and strength of oneself. Mostly being associated with women of social class, the image of graciousness is also represented by being prim and proper.

What does a Purple Snapdragon Floret Signify?

Antirrhinums with purple flowers indicate an initiative of encouragement and motivation in situations with unpredictable outcomes. Funny enough, this color of the flower is a great reminder that uncertainty lies with each waking day we have! Embrace it and always live life to the fullest!

What does a Yellow Snapdragon Flower Symbolize?

Yellow is a bright shade and in the case of Antirrhinums with flowers of this color, it symbolizes creativity and deep-rooted passion for new things. This flower is a great reminder of living life as your own version of yourself!

What does an Orange Snapdragon Bloom Mean?

Orange is commonly often associated with hazards such as in traffic cones and signs. In the language of flowers, orange snapdragons can represent either deception or the force of another’s will over your own! So, better yet be wary of these colored blooms!

What are the Myths Associated with Snapdragon Flowers?

A few well-known myths are attributed to such flowers. One of those myths says that bearing the plant’s flower with you in person wards off witches and the effects of their witchcraft. If you believe in such a myth, you can always opt to keep a flower or a petal or two with you on hand for magical protection!

What Does a Snapdragon Floral Tattoo Symbolize?

A floral tattoo with plain or colored Antirrhinum flowers embodies grace, protection, and strength. It is the tattoo design chosen by most modern-day women.

This plant has an array of uses ranging from being consumed to being extracted for its oil. It is commonly ornamented as a garden plant, potted plant, or cut flowers in a vase. But did you know that a dye can be made from its flowers? You read that right! A green dye is obtained from its flowers while the oil extracted from leaves is edible and as healthy as olive oil!

Aside from those, there have been claims that its leaves and flowers are traditionally used as a treatment for inflammations and swellings. It is also claimed that poultices of snapdragons treat tumors, ulcers, and hemorrhoids. A word of warning that it’s a must to always consult a medical professional before using this plant or any part of it for medical purposes.