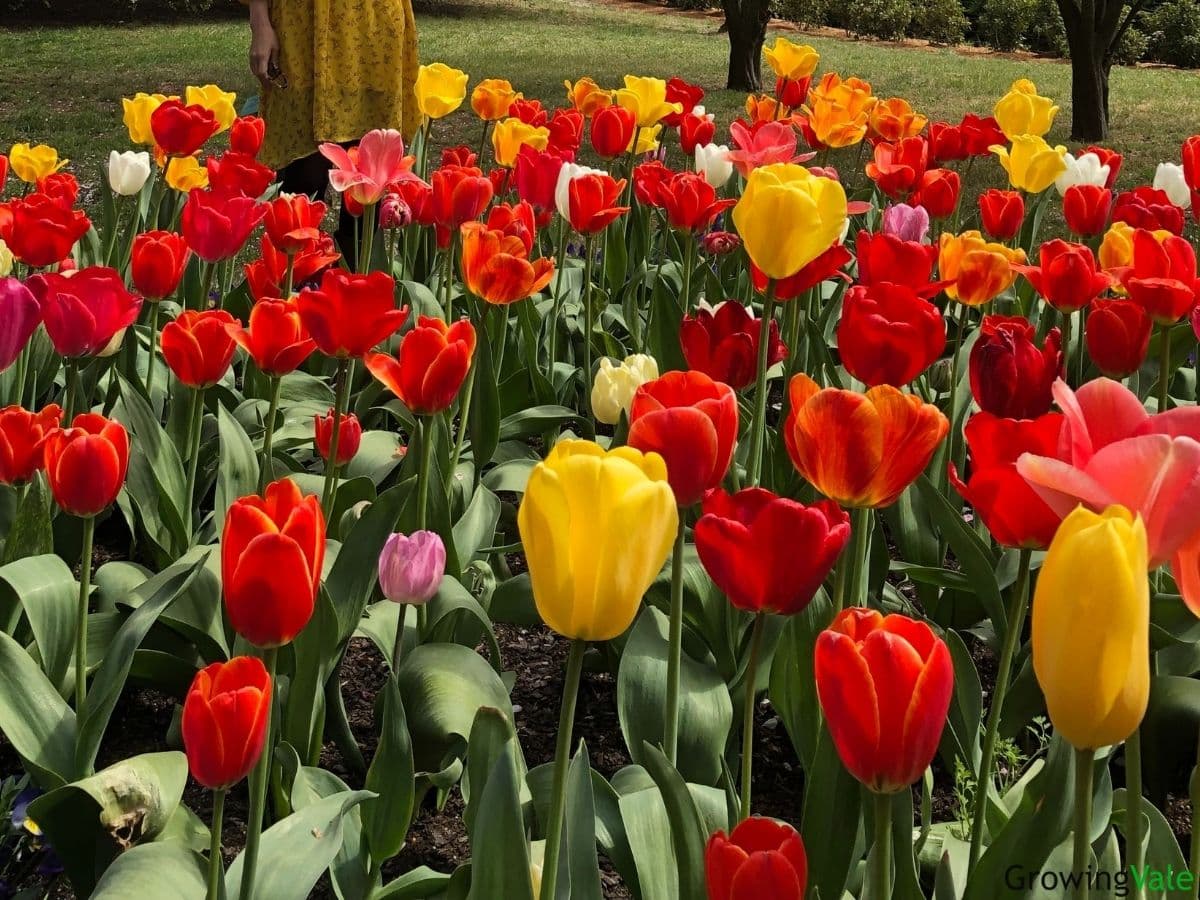 The beauty of Tulips is one to always remember and leave one in awe. Known as one of the most beloved flowers in the world, a Tulip comes in several amazing colors that will simply take your breath away! The meaning and symbolism behind many tulip varieties also rank it as one of the most demanded florals for any season!

Have you ever been to Holland and watched these flowers of different colors during its bloom? It’s certainly a sight to see and add to your bucket list. While you’re at it – planting Tulips will also make a great addition to your floral garden collection!

The history and origin of the Tulips are not what you think it is. These blossoms were first defined in 1578 as perennial bulbous herbs with elegant showy flowers. It is popularly cultivated as an ornamental flower for pots and gardens.

Tulips belong to the genus Tulipa coming from the Lily or Liliaceae family. Around 100 beautiful species are found in this genus. The Latin genus comes from the Persian word Toliban meaning turban and is actually referring to the distinct shape the flower resembles.

Usually, flowers are named after gods, goddesses, or other mystical figures. Here are some interesting facts you probably didn’t know about Tulipa flowers! Tulips are more commonly differentiated by their morphology and plant size. And what about the flowers with streaks of different colors? Well, that is actually caused by a virus!

Another interesting fact about Tulips is that it did not originate from Holland. These flowers are native to south and central Asia and Turkey where cultivation began in the early 10th century. It was brought to Europe in the 1500s by Viennese ambassador Augier Ghislain de Busbecq from Turkey.

The rise to fame of Tulips began in the 1600s when Holland became the world’s top producer. Gorgeous Tulipa blossoms arrived in Antwerp from Holland signaling the Tulip Mania from 1633-1637.

A few of the Tulips during the craze include the Lady Jane (T. clusiana), the Fusilier (T. praestans), the Henry Hudson (T. vvedenskyi), and the Lilac Wonder (T. bakeri).

Since its first cultivation in the 10 century, Tulips have been regarded as a symbol of the Ottoman Empire. In Turkish culture, the people believe that these flowers are a figure depicting the paradise of Earth with divine status.

The Tulip capital in Holland also honors these flowers as its national symbol and flower. For these folks, it is a representation of the briefness of life.

In 1590, Camerius noted that Tulips were a symbol of reminiscing – always upward gazing at the stars and heavenly bodies in the sky. Tulipa blossoms are also symbolic of fleeting beauty and luxuriousness given its demand and price inflation during the Tulip Mania.

The hidden meaning behind Tulips lies in this little secret. Even after cutting off the flower, the plant itself will still continue to bloom!

Tulipa blooms are the perfect flowers to express love, devotion, and thornless vulnerability to emotions and urges. These would make a gorgeous bouquet that would speak of elegance and refined grace.

What does a White Tulip Flower Mean?

White Tulips convey the meaning of magical enchantment and a few well wishes when it first blooms in the Spring!

What does a Red Tulip Blossom Symbolize?

Tulipa flowers with red petals symbolize a very strong declaration of love and passion! Once in full bloom, these blossoms are symbolic of worldly fame.

What does a Yellow Tulip Floret Indicate?

Yellow is indeed a very happy and joyful color. Tulips in this shade indicate a sunny disposition and quite frankly – a hopeless love!

What does a Purple Tulip Bloom Represent?

There is nothing like achieving enlightenment with happiness – but purple Tulips represent pure happiness coming from the beauty of nature and the countryside!

What does a Pink Tulip Flower Symbolize?

If you’re out looking for a Tulip that symbolizes loveliness and dainty yet majestic charms, then a pink Tulipa blossom is just what you need.

What does an Orange Tulip Blossom Mean?

The perfect lover is what is meant by an orange Tulip blossom – this perfect lover’s image also means ardent and undoubted compassion.

What does a Brown Tulip Floret Represent?

Brown Tulips are not really brown in color – it is actually a deep shade of reddish-brown when the sun shines on it. This kind of Tulips represents nature’s beautiful eyes!

What is the Cultural Significance of a Tulip Bloom?

Tulips are regarded as very sacred flowers in Turkey. They are called Lale in Turkish culture and have the same Arabic characters for the name of Allah. This very coincidence makes these flowers sacred and important in the house of Osman.

In the cultural traditions of Turkey, the Tulip floral motif are decorated in tiles, mosques, and fabrics during the Ottoman Empire.

Other Western and Asian countries also hold this flower in high regard. Countries that hold various Tulip festivals include the United States, Canada, South Korea, Japan, and Australia.

What is the Biblical Meaning of a Tulip Flower?

With the very distinct shape of Tulips, there are a few key religious meanings behind this flower. It is symbolic of the Chalice or more commonly known as the Holy Grail.

Italian scholars and wise men also say that this flower is a symbol of divine love – it withers away if kept away from the sun or the light of God.

Devout Christians preach of this flower as a symbol of passion and faith. Representing the time of Easter, a Tulip can speak of forgiveness and loyalty such as Christ was towards His disciples.

What is the Spiritual Influence of a Tulip Blossom?

A Tulipa blossom essence can bring a lot of positivity and good energy. It clears out annoying and raging energies caused by stress and weariness. Tulip essences initiate a better sense of relaxation and focus for errands and important engagements.

In terms of relationships, Tulips grant an environment of healing and serenity. It inspires for to live simply and well-grounded but still very charming and confident.

What are the Folktales Associated with a Tulip Floret?

With a rich history and symbolic meaning, it’s no wonder that a few folktales go around about Tulips. During the height of the Tulip Mania, a myth about the goddess who owned these flowers. Tulips once belonged to Roman goddess Flora – artists in satirical arts degraded their beauty to become lewd!

In the Middle Ages, some folks began whispering about how Tulips were more extremely expensive compared to diamonds and other precious gems! This doesn’t sound too impossible since Antwerp is known as the city of diamond industry and trade!

There is a homey folktale associated with a Tulip. Place this flower in a vase placed in the kitchen to attract good luck and bountiful blessings into the home!

What does a Tulip Floral Tattoo Symbolize?

A Tulip floral tattoo is mostly chosen by those who wish to embody their timeless beauty and refined grace. In a much deeper understanding, Tulipa flower tattoos express very deep love and passion yet are kind and tender.

Tulips are among the most popular flowers in the world. The flowers make an excellent ground cover flowering plant or potted plant perfect for homes or recreational parks!

During the early 17th century, young women would crush the petals of red Tulips and rub the dye onto their cheeks as a blush! Another benefit of doing this was the wonder of clearing up any spots on the face!

Because of its extreme price way back, Tulips were often not used for medicinal purposes. For those who could afford it, a poultice was made from crushed petals as a remedy for burns, rashes, bites, and stings.