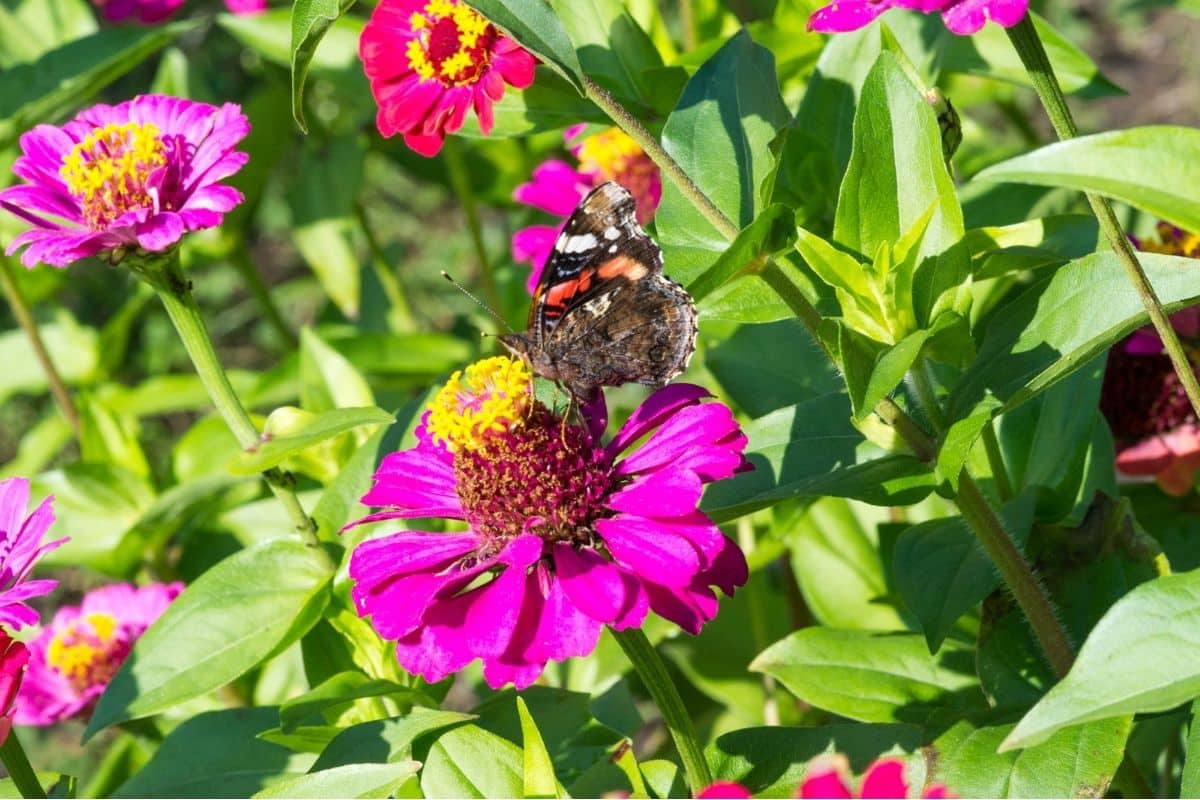 The name Zinnia sounds just as bright and bubbly as the famous sour strip candy Zazzy – so is the zinnia flower meaning symbolism. This plant holds true to the idea that given the striking color display of its flowers!

Besides the beautiful colors, the zinnia flower symbolizes many things. It may seem like a dull-eyed looking weed, but don’t let that fool you.

Many garden folks say the zinnia flowers symbolize friendship, gratitude, and honor. This flower also means everlasting memories. The zinnia plant also comes in different colorful flowers each with its own meaning.

For example, a red zinnia means constancy while a purple one means royalty and nobility. Other colors such as pink, white, yellow, and orange zinnias mean romance, creativity, remembrance, and adventure respectively.

Zinnias are known as annual herbaceous plants and is a family member of the daisy family. The first mentioned accounts of this flower date back to the 1520s during the era of the Aztecs.

The plant was previously called crassina by the Aztecs which denotes its somewhat coarse appearance resembling weeds. Before acquiring this modern dazzling name, the etymological meaning of this plant was known as an eye-sore or the evil eye.

The genus Zinnia came to light in 1767 when Swedish botanist Carolus Linnaeus amended it from the early Aztec name. The common name was applauded for German botanist and anatomist Johann Gottfried Zinn. It is primarily native to central America, Mexico, and southwestern United States.

Here are some interesting facts about the Zinnia. It was Johann Gottfried who received the first zinnia seeds (mal de ojos) from Mexico. From there on out folks in Germany gained an interest in the weed turned to a horticultural flower. Not only that but these flowers can grow up to 4 feet tall!

It belongs to the Asteraceae or Compositae family and is related to 22 other flora species including the oh-so-popular aster, daisy, and sunflower blooms!

Some of these different zinnia varieties include the common zinnia or zinnia youth and old age (Zinnia elegans or Zinnia violacea) and the narrow-leaf zinnia (Zinnia angustifolia).

In today’s assortment of hybrid Zinnias, it is amicably treasured for its marvel of all-day fresh-looking flowers that are brightly colored with striking patterns. There are some botanical facts you need to know about the new flowers that bloom.

Growing zinnia plants under full sun conditions with well drained soil and frequent liquid fertilizer. Make sure to have your plant in a sunny place. These plants aren’t fond of the cold so they’ll begin to die off on the first frost or when the hard frost sets in.

Don’t worry though, because once the flowers die off just simply shake the dead flowers and let the seeds fall. Cover this up with dead leaves or soil and wait till early summer to get new blooming zinnias.

This particular flower may have more than what meets the eye when it comes to its symbolism. A few might assume gloomy ideas behind this flower because of the Aztecs. Nevertheless, the flower symbolism of zinnias is very positive. These cheerful flowers are known today as the flowers of friendships.

In the State of Indiana, these beautiful flowers have been bestowed as the official state flower since 1931.

The plant is defined as any genus Zinnia of tropical herbs comprising low-lying shrubs with flamboyant and enduring flowers. It is native to Mexico and North America as a perennial plant but an annual type plant when cultivated elsewhere.

The most common of all species in this genus is the Zinnia elegans or the elegant Zinnias. It signifies the lost and present company of friends. The flower meanings associated with these flowers include an everlasting friendship and the cherished memories made. Some even say the flowers can mean a joyous endurance or spontaneous endurance.

In Victorian times, flowers were used to communicate many meanings, feelings, and thoughts. During that time, zinnias had the Victorian meaning of desire or romantic intentions.

Each zinnia color has many special meanings to it. Here are some of the colorful blossoms zinnias come in along with their color meanings.

What Does a Scarlet Zinnia Flower Mean?

Scarlet is just one of the many famous shades of red. Red zinnias bear the meaning of faithfulness or constancy and confidence.

The color red of zinnias also has another meaning. These red zinnia flowers also represent anger or strong feelings towards romantic partners most especially.

What Does a Purple or Magenta Zinnia Blossom Signify?

There are many other purple flowers commonly associated with nobility and royalty. Meanwhile, magenta is a shade of light purplish with a hint of subtle red in comparison to the color purple. A purple zinnia flower or magenta zinnias has a very intriguing meaning.

For the case of Zinnias, these purple flowers symbolize wisdom, spirituality, and lasting affection. This idea epitomizes pondering one’s most inner thoughts and grounding for goals of higher ideals.

What Does a Pink Zinnia Bloom Symbolize?

The pink flower of this plant has a symbolism akin to that of magenta-shaded varieties. Pink zinnias denote the lasting affection between two people in romantic or friendly relations.

What Does a White Zinnia Flower Mean?

White zinnias are usually associated with purity and holiness. For white Zinnia flowers, white is a sign of goodness and prosperity. It can also symbolize growth and creativity.

What Does a Yellow Zinnia Blossom Represent?

Yellow flowering Zinnias are believed to convey daily remembrance of a beloved or the haunting of memories of the past. Amidst this, yellow zinnias commonly manifest the good or bad memories of a beloved one – but mostly, positive emotions or positive energy.

What Does an Orange Zinnia Bloom Symbolize?

An orange blossomed Zinnia delivers the traits of being outgoing, adventurous, and carefree. This color lets go of spiritual inhibitions and grants the freedom to be one’s own self.

The color orange zinnias also symbolize strong emotions and are a symbol of good health.

What Does a Green Zinnia Flower Mean?

The color green is mostly associated with good wishes and good luck. A green zinnia may be just as rare as a four-leafed clover but both have the same meaning – good wishes. These beautiful blooms also mean the fifth chakra of the heart which is symbolic of growing love or a love renewed.

What Does a Blue Zinnia Blossom Symbolize?

A blue zinnia is as rare as a green one. That’s why when you get your hands on a color blue zinnia flower, treasure it. These flowers are symbolic of uniqueness and a strong relationship grounded on trust, faith, and friendship.

What is the Essence of a Bouquet of Zinnias?

Handing a bouquet can imply numerous meanings. Giving Zinnia bouquets can symbolize well wishes for an absent friend on long trip or going away for good. This act also signifies well wishes.

Meanwhile, a mixed colored Zinnia bouquet reminisces the good old days and the past company of beloved friends or family.

What is the Cultural Art Symbolism of Zinnia Flowers?

Zinnias have quite an important cultural significance especially in art. This plant and its flowers are not only decorated in gardens but also graced in paintings and poems. During the ancient Aztecs period, the people of this tribe devoted lyric poems that praised and described an array of plants including Zinnias.

Hans Heysen, an acclaimed German-born Australian artist, portrayed the Zinnias through his work “Flower and Fruits (Zinnia)” in 1921. The artwork detailed his life and experiences as a migrant in Australia. It captures the cultural diversity of immigrant people from foreign lands that have come together to co-exist as one community.

What Does a Zinnia Tattoo Symbolize?

A tattooed flora design of this plant expresses the longing of absence for or the memories of a dearly departed or a distant romantic partner. It symbolizes the desire to always remember one’s most cherished moments of a late friend of the family.

The zinnia is no doubt a great addition in a garden or as flower pots in the yard. When in bloom, it will also make for the perfect gift of cut flowers you can give to friends and family. Zinnias are in fact also edible flowers that can be added to many forms of dishes such as salads and steamed rice.

But be wary because having many different zinnias in your garden can get the white fly population out of control. Although it has an iridescent beauty as a flower, an important part of having this in your garden is to maintain its growth and population.

Don’t forget that it is still a weed so it can get out of hand! So, the best way to keep these flowers under control is removing the flower heads before they die off.