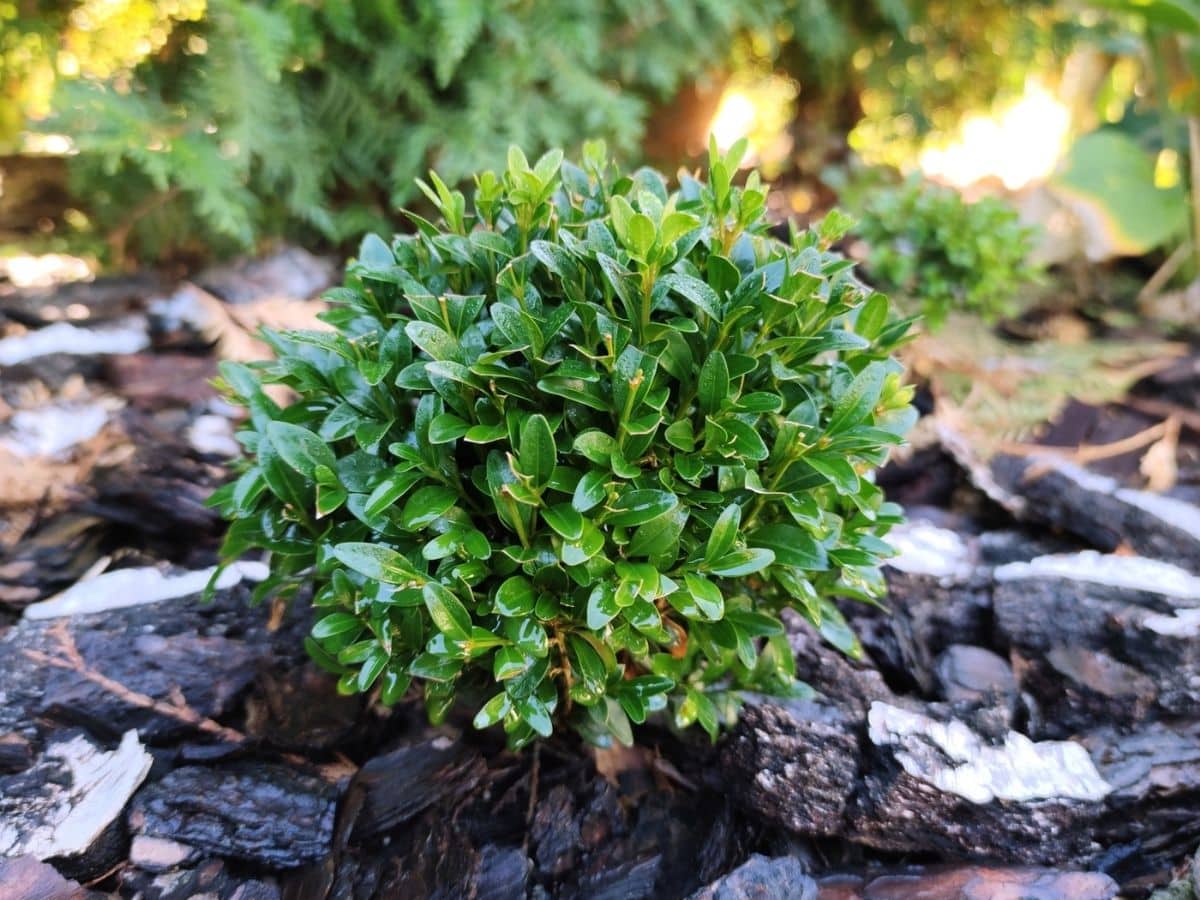 Boxwood, also known as box, is a genus of around 60 species. Native to parts of Europe, Asia, Africa, and the Americas, most species are tropical or subtropical and few are frost-tolerant. Modern cultivars and hybrids come from only 2 species, English boxwood and Japanese boxwood.

This evergreen shrub is slow growing. It is grown primarily as an ornamental plant, and due to its dense, thick growth, it is ideal to use for hedging or screening purposes.

Boxwoods became a popular plant for formal gardens and for hedging in the 1700s. Despite the large genus, there are only a very few varieties that are commonly grown.

Not surprisingly, given its name, boxwood has been used for hundreds of years for cabinetry purposes. The wood is very hard, smooth textured and can be highly polished which makes it ideal for musical instruments, boxes, and engravings.

How to Plant and Grow Boxwoods

This is a plant that can grow successfully in either the soil or in a pot. Try to find somewhere where the box shrub will be out of the wind and in full sun or partial sun.

Check your species carefully; not all species are frost-tolerant and because they have shallow roots, they can be vulnerable to very cold temperatures. Equally, their shallow roots can succumb to too much heat, so the soil should be protected with a thick mulch.

Whether you are growing this shrub as a hedging plant or as a container grown specimen, it will perform best if planted in dappled sun so that it is protected from hot afternoon sun. If it is a dwarf specimen, consider planting it in the shade of overhanging tree branches. The box will like the cooler soil temperatures.

See more: What to plant in front of boxwoods

Box shrubs can be planted in fall, late winter or early spring. If planted in the fall, the shrub can settle before winter sets in. Most importantly, never plant in the middle of either summer or winter. Extreme temperatures (either very hot or cold) put too much stress on the plant when it needs to get over the shock of being transplanted as easily and quickly as possible, without any setbacks.

These plants are not overly fussy. But although pH values in the soil aren’t too important, well-draining soil is. The ideal soil type is sandy, and it is essential that the roots of the box do not sit in wet or soggy soil. If necessary, improve the soil with composted pine bark, moss, compost and if necessary, perlite to improve the drainage.

It isn’t necessary for a boxwood to have very deep soil, as the shrubs have shallow roots. Instead of their roots spreading downwards, they will spread laterally. And they are slow-growing plants. This makes them good candidates for container planting.

It is better to give the newly planted boxwood bush a thorough watering once a week, than a daily light watering. This will ensure that the soil is able to dry out, and the shrub won’t be sitting in soggy soil.

Watering in this way is really only necessary until the roots become established. Once the plant settles in, and in the second or subsequent growing seasons, you will not need to water it at all unless it is in a prolonged period of heat and dry conditions.

Keeping a layer of mulch around your plant (but not too close to its stem) is a great way to conserve moisture in the soil.

An annual application of a slow release, and general purpose fertilizer is a good choice to keep your shrub healthy and growing well. Unlike flowering shrubs and perennials, box likes a higher nitrogen content in the fertilizer mix. This will encourage plenty of new growth.

Never give your shrub fertilizer unless it is healthy and growing well, as excessive feeding can put your plant under stress.

If the boxwood receives too much sunlight, it can turn orange in winter and lose its vibrant green color until the following spring. Provision of a little shade, however, will prevent this happening. So, if possible, plant the boxwood shrub somewhere that is in dappled shade, such as under the branches of an overhanging tree. Some sun is necessary, but ideally this should be cooler, morning sun.

Boxwood is a hardy, tough and resilient shrub. If it has been neglected and lost its shape, you can restore it easily with a pair of sharp and clean loppers.

Before shaping the plant, you need to make sure you have removed any dead wood, and any branches that are not in full health. The middle of the box plant tends to become very dense and thick, and it is a good idea to try to thin the shrub. This will improve the air flow around the plant and minimize the possibility of pest infestations and other disease taking hold.

If the box bush is grown in a pot, you will need to repot it every three or four years. These plants are slow-growing by nature, but will be even more slow-growing once they have outsized their container.  Water the pot well and leave it to soak before you transplant the shrub. Tease the roots away from the base and the sides of the pot, trying to damage as few of the small roots as possible.

When choosing a pot for a boxwood shrub, choose one that is suited to the size of the plant. A pot grown box should be as wide as it is tall, and the pot should be even wider than this.

Relatively easy to propagate box bush, this is a great way  to increase your plant stock at low-cost. The best method is stem cuttings taken in the middle of the summer. At this time, the plant is growing vigorously, and you have the best chance of success.

The cuttings should only be around 3 inches (7.62 cm) long and use a sharp knife rather than scissors or secateurs, which will squeeze and damage the tips of the stems. You can root them directly into potting compost and make sure they don’t dry out.

Boxwood bush will not root quickly, and if they haven’t formed roots by the onset of winter, it is a good idea to overwinter the pots in a cool place that is protected from frost. If you have a garage, shed, cold frame or greenhouse, then this is ideal.

The only downside of raising boxwood from home-grown cuttings is the time it will take for you to have viable boxwood plants, sufficiently large to plant out as a hedge. It can take up to three years or even longer before the plants are big enough. But, think of the money you will save!

There are many causes of fungal diseases that can attack boxwood plants. One of the main fungi that will result in your plants suffering from root rot is caused by wet soil.

There is no cure for root rot, so you should do all you can to avoid it killing your shrub. Some species of boxwood are resistant to the disease, and make sure your soil is well draining.

Other causes, such as leaving too much dense foliage in the center of the plant, will also result in problems. Poor air flow and a build up of decaying leaf matter in the middle of the bush can result in boxwood decline and blight. Improve the growing environment and apply a fungicide treatment. This may or may not be effective, depending upon how advanced the condition has become.

Boxwood blight, also known as canker, is another disease that will cause the shrub’s leaves to turn yellow and kill the stems.

Boxwood decline is not just one disease, but the name which refers to several maladies that affect boxwood shrubs. Branches die, leaves discolor and fall off. There is little you can do but watch the shrub die. Don’t be tempted to replant in the same planting site or soil.

As far as pest issues are concerned, boxwood plants are not attractive to or attacked by deer. However, there are microscopic worms in the soil which will eat through the roots of boxwood. Almost impossible to eradicate, but if you keep your plants as healthy as possible, you will limit the damage that the plant suffers from their munching.

Boxwood shrub varieties are available that are hardy to USDA zones 4 to 10, but their ideal growing conditions are found in zones 6 to 8. They are able to resist cold and heat pretty well. Even in the winter, a healthy plant will remain bright green. Even if there is frost, they should not suffer unduly, although it is possible that the tips of the plants will die back after very cold spells.

In hot summers, in the hotter regions, you will need to give your shrub more water and also some shade from the strong afternoon sun.

Other Uses for Boxwood Shrubs

Apart from its use as a hedging plant, box is a useful ornamental shrub used to divide planting spaces. When shaped, it forms a beautiful domed top, or it can be trimmed for topiary purposes. It is its slow-growing characteristic that makes it perfect for these purposes. Boxwood hedges are amazing for garden.

Box is considered to have low toxicity risks for humans, but can be poisonous to domestic animals, such as dogs, cats, and horses.

There is no solid medical evidence to back up the health benefits said to be contained in the leaf extract of boxwood. The leaves should not be used in their entirety, but leaf extract is used to help with certain medical conditions such as arthritis, HIV, and malaria.

Types of Boxwoods You Can Grow

This popular shrub is so versatile to use in landscaping. Being evergreen, boxwood bush will provide a show throughout the year, when most plants are in their dormant phase.

The main choice to make is between English or American boxwood and Japanese boxwood.

Both English and American boxwood can both  be used to create hedges which will stay manageable in height. Both are hardy to zone 6 and both are slow-growing shrubs.

American boxwood (Buxus sempervirens) is a small tree that will reach 10 feet (3.05 m) in height.

English boxwood (Buxus sempervirens “Suffruticosa”) is generally grown as a round, dwarf evergreen.

English boxwood is often referred to as common boxwood. Varieties are available as tall, upright plants or as small, dome-shaped, low-growing shrubs.

Many varieties are dwarf plants that are used to provide natural low edging or garden borders. These have the advantage of being able to be trimmed into dome-shaped balls, or used to create showy topiary, either in containers or in the soil.

In some formal plantings, a columnar effect is required. There are tall varieties of boxwood available, which grow naturally in a pyramidal form. These are perfect shrubs if you want a plant with a cone shape to give a focal point of view.

Buxus microphylla (Japanese boxwood) is a completely different type of boxwood. It grows faster, which makes it a good choice for formal hedges. There are different species available that grow to different heights. Some of these species are more cold-hardy and sun-tolerant than the English boxwood varieties.

Finally, don’t despair if you live in a colder region. Plant breeders have recognized that boxwood is a popular garden shrub, and have developed hybrids that are cold hardy to USDA zones 4 or 5. Two such varieties developed in Canada are “Green Gem” and “Green Mountain”.

Before selecting your boxwood bushes, check that it is compatible for planting in your zone. Remember that it is not just their cold-hardiness that is important, but also their tolerance to sunshine.

Feeling creative? Buy a boxwood shrub, get out your secateurs and see what your plant develops into!