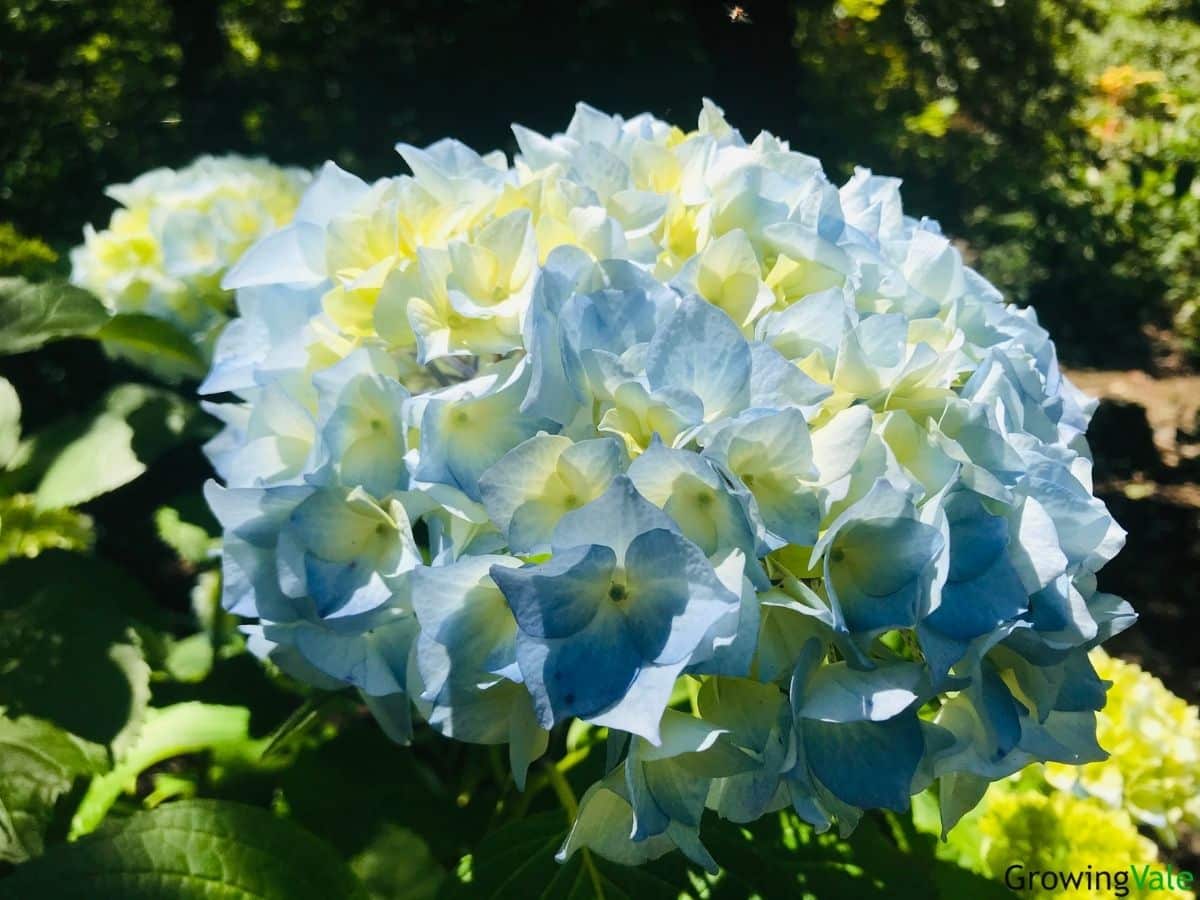 A favorite in the garden, hydrangea flower can provide you with a spectacular show of blooms, and with favorable growing conditions, this summer display can go on for weeks on end.

Although the hydrangea is a relatively easy plant to grow successfully, there are some diseases of hydrangeas that can occur with all parts of the shrub, including the leaves, roots, and flowers. It’s always best to try to prevent diseases or other problems.

This is particularly true with hydrangea bushes since their flower buds develop so long before the flowering season. If the flower buds don’t develop fully, then you will have to wait a whole year for the next floral display.

Powdery mildew is easy to spot by the grey, powder-like coating on the leaves. The fungus is usually caused when there are large daily swings in temperature between day and night.

If the problem isn’t too widespread, you can simply remove any infected leaves. The best way to prevent mildew on your hydrangeas is to make sure that you water the base of the plant and avoid getting the leaves or flowers wet.

Hydrangea plants that are suffering from a fungus can display leaf curling symptoms prior to going yellow or brown.

Pests too can attack the leaves. Most commonly, insects such as aphids will chew away at a young leaf’s cellular structure. Scale insects will suck the sap from the hydrangea foliage and also the new stems. This will result in the appearance of small holes and a curling up of the leaves. If left unchecked, the leaves will die. The results can be serious for a new hydrangea.

A young plant will be deprived of nutrients and moisture due to the damage in the leaves, so it is a good idea to eliminate the pests. Use a recommended pesticide and remove the curled or dying leaf material.

In June, after a wet spring, your hydrangea shrubs may suffer from a fungal disease. The leaves may develop unsightly yellow, brown or black blotches, but fortunately, this leaf spot fungus is a disease from which the plant will not come to any harm, even though it’s one of the most common hydrangea leaf problems.

The flowers will not suffer. Admittedly, it does spoil the look of the lush, green foliage, so if this is important to you, you can cut off the worst affected leaves.

If you notice brownish-colored spots appearing on the flower petals as well as on the leaves, this is a sign of a different type of fungus, known as anthracnose. Very rarely, this can kill hydrangea plants, so you should try to identify whether the fungus is of this type. The leaf spots produced by the anthracnose fungus are typically larger and have a small white spot in the center.

The symptoms of leaf spot caused by a bacterial pathogen on hydrangeas are similar to those caused by fungus. Usually, the spots will start to appear on the leaves of the lower branches. They will be reddish-purple or brown.

How to Treat Leaf Spot and Hydrangea Rust

Although you can use a fungicide on hydrangea shrubs, this really isn’t necessary in the overwhelming majority of cases. The most efficient treatment is preventative. Keep the ground at the base of the hydrangea clear.

Remove any old flower blossoms, and keep the base free from decayed or decomposing material. You can also remove any old stems at ground level. This will improve ventilation around the base of the plant. The better the circulation of air around the stems, the healthier your plant will be. Remove and burn any infected leaves, and don’t let plant debris remain on the ground.

Removing the vegetation from the base of the plant will make it easier to water the ground at root level without causing splashing on the leaves.

There are also some natural remedies that can be used in spray form for leaf spot. These include liquid tea and liquids derived from composted material, such as seaweed, and garlic oil.

If you decide to treat with a chemical fungicide, be prepared to repeat the treatment every 10 days from spring to mid-summer. You need to follow the directions on the label carefully for details of correct dosage.

If your hydrangea leaves turn yellow or brown and then fall off the plant, the problem is more serious. Such symptoms indicate that there is a root problem.

The most likely cause is that the hydrangea plant has been planted or transplanted and has not been provided with sufficient care in the early stages. Until the hydrangea has had time to settle into its new environment, its roots will not be established.

Without a robust root system, the plant will be unable to absorb nutrients and moisture effectively from the soil.

It is imperative that a newly planted hydrangea shrub is not over-watered, and does not dry out.

Even a mature hydrangea will not withstand being left in heavy, waterlogged soil for extended periods and will die if its roots sit in soggy soil. So if you are transplanting an established hydrangea plant, make sure that the soil in the new site drains well and if necessary provide a soil conditioner.

If your hydrangea has dried out during periods of heat, its leaves will wilt and turn yellow. You need to water it deeply and allow the excess water to drain away. Do not continue to water the plant at this stage as the damaged roots will not be able to cope with the excess water.  Allow the plant to almost dry out and then repeat the watering process.

Equally important for the new hydrangea is that it doesn’t receive an excess of fertilizer. Leaf burn is the likely result of too great an application of fertilizer, with leaf edges going brown and crisp.

The best way to deal with this hydrangea problem is to water the plant well to dissolve the fertilizer from the soil. Then let the plant dry out before watering it again. Resist the temptation to re-apply fertilizer until the plant has completely recovered.

Remember that fertilizing hydrangea should only be done when the plant is growing well and is healthy. If you fertilize an ailing plant, you are likely to make the problem worse as you are putting more pressure on it to grow more vigorously and produce new growth.

Sometimes, the problems encountered are not attributable to pests or disease at all, but simply the result of unfavorable weather conditions, possibly months earlier. Hydrangeas can fail to bloom after a drought, even a drought the previous year.

A single storm or violent tempest can be enough to damage the plant, and the results may not be evident straight away. Developing hydrangea flower buds can die and drop off, new shoots can die back and leaves can tear or break. New plants are more likely to be seriously affected than more established ones. You should however remember that the symptoms of damage by weather conditions are often similar to those caused by pests or disease.

Damage by weather may stunt the hydrangea’s development and put an end to the current year’s blooms, but it is unlikely to completely kill the plant.

A hydrangea that doesn’t flower is a huge disappointment! Usually, the cause is not a disease, but the result of incorrect maintenance or poor growing conditions. A hydrangea that blooms on old wood such as the H. macrophylla develops its flower buds for the following year whilst still flowering.

It is most important that if you prune your bigleaf hydrangea, you do so before these new buds form. If you wait until after mid-summer, you will cut off the following year’s flower buds and have no blooms at all.

When pruning, or cutting off finished flower heads, cut just below the dead flower and leave the newly forming buds intact.

If you have a hydrangea that blooms on new wood, or one of the new varieties that blooms on both new and old wood, the timing for pruning is less critical. You can carry out your pruning and cutting back in the winter or early spring, but bear in mind that you may lose the buds which have formed on the old wood and have to wait until later in the year for your flowers.

Other causes of a lack of flowers are an early or late frost. Damaging winds, as well as frost, can kill off the new tender growth and buds.

The hydrangea is often planted in a woodland setting, but if it doesn’t receive sufficient sunshine, it will produce lush vegetation, but not produce flowers. It is therefore important to plant the shrub in a site where it will receive morning sun but be protected from the heat of the afternoon sun.

Likewise, if your hydrangea has too much fertilizer, this will also result in an abundance of lush growth at the expense of flowers.

With their huge flower heads, vibrant, long-lasting blooms, and verdant foliage, it’s no wonder that the hydrangea has remained a gardener’s favorite for centuries and continues to be one of the most popular garden perennial shrubs.

Although many possible hydrangea diseases and problems are listed above, hydrangea is not a difficult plant to grow. Selecting the right variety for your garden and climate, providing satisfactory growing conditions, and maintaining a regular watering program are the three most important things to bear in mind to successfully grow hydrangeas in your garden.