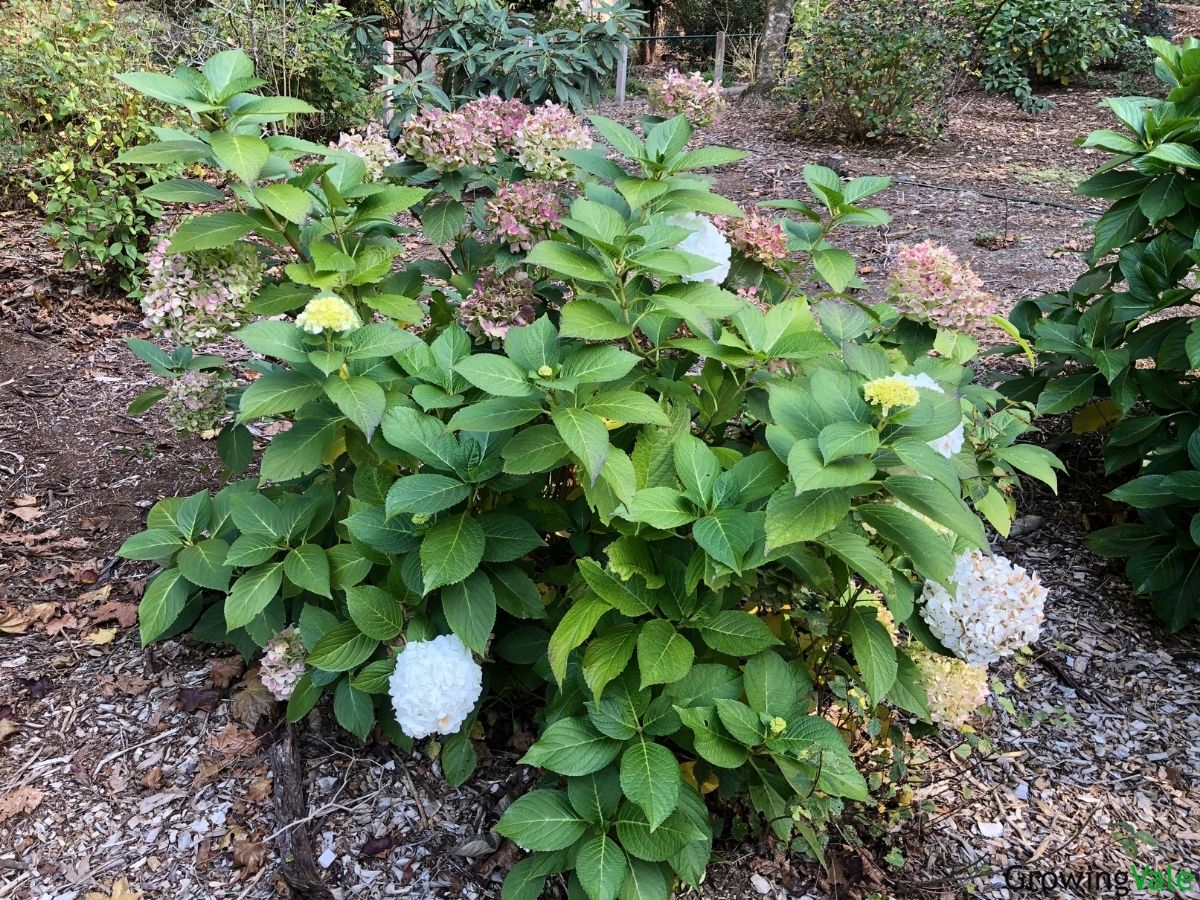 Hydrangea flowers are a traditional and all-time favorite plant in the garden. Their majestic blooms shout “Summer is Here!” like no other flowering shrub. They come back every year, require little maintenance, and should never disappoint.

But sometimes you may be faced with a hydrangea that doesn’t perform as well as expected.  Before you can fix the problem, you need to decide what has caused your hydrangea not to flower or only offer up a few blooms.

Types of Hydrangea That Flower The Most

There are only five types of hydrangea that are commonly grown in gardens, which are:

When Do Hydrangeas Bloom?

So what month do hydrangeas bloom? Each hydrangea type flowers at different times, but in general, all hydrangeas can be expected to flower between late spring and early fall.

It’s not possible to be more definitive about the flowering season as this will depend on the location, the climate, and the variety. Hydrangeas will flower earlier and for longer in warmer climates.

The bigleaf hydrangea is by far the most popular garden hydrangea. Bigleaf hydrangeas include the instantly recognizable mophead and the more delicate lacecap varieties. These beautiful shrubs will usually flower from late spring to mid-summer, unless you have a newer cultivar that has been developed to bloom on both new and old wood. These are known as re-blooming hydrangeas and will give you flowers over a much longer season.

It isn’t just the type of hydrangea you grow or your location that will determine the flowering season. Other factors such as pruning, weather, fertilizer, and location can cause your flowers to be delayed, reduced in number, or smaller.

Why Are My Hydrangeas Not Blooming?

Many widely grown hydrangeas bloom on old wood. If you delay pruning your hydrangeas, you risk losing flowers the following year because the plant will not have sufficient time to develop woody growth on which the flower buds form.

It isn’t necessary to prune mophead or lacecap hydrangeas at all. But if you find that your shrub is getting too big, or untidy, then pruning can be done as soon as the flowers fade.

Pruning too hard or too late is another common reason for a hydrangea to stop flowering or not perform well.

A hydrangea will benefit from an application of a slow-release fertilizer once or twice a year in Spring and Summer. But too much fertilizer can burn the roots and inhibit the production of flowers. It is very important not to feed your hydrangeas with a fertilizer that is high in nitrogen content.

Never fertilize your hydrangea shrubs after August. The plant will produce too much lush, tender growth that risks being damaged by winter cold.

Another common reason for a hydrangea plant to produce few or even no flowers is a lack of sunshine. Because hydrangeas are often planted in a woodland setting, overhanging trees can, over time, grow too large and cut off the sunlight to the hydrangea below.

Hydrangea shrubs are often referred to as shade-loving plants, but this can be misleading. In order to perform their best, most varieties need to receive around four hours of sunshine a day in the morning and should be shaded from the afternoon sun.

After incorrect pruning, the weather is probably the second most likely reason for hydrangeas not to produce flowers. Young flower buds are sensitive to cold and will be harmed by a severe winter or a late spring frost, which is why it’s important to learn how to winterize hydrangeas.

You can prevent bud damage by providing protection around the plant in the fall once the leaves have dropped. Don’t use plastic though as this doesn’t breathe and the hydrangea plant is likely to heat up too much on a warmer day.

How to Get Hydrangeas to Bloom Again

If it’s already spring or summer, then it’s too late to have flowers during the current year. You just need to make sure that you have pruned at the correct time and followed the advice above. Flowers should then reappear the following year.

Keep an eye on the winter temperatures and be prepared to cover your hydrangea if a period of freezing weather is forecast.

If you don’t think any of the above situations apply to your hydrangea shrubs, you could consider having a soil test. If the results show your soil is high in nitrogen, this is very likely to be the cause of the hydrangea not flowering. Nitrogen-rich soil will produce healthy hydrangea plants, with lots of lush green foliage — but no flowers.

If you have a hydrangea that blooms on new wood, you are less likely to have a problem with no flowers on your shrubs. Newer cultivars are more adaptable to shade and are more cold-hardy too.

A reblooming hydrangea flowers on both new and old wood. This means that if you prune your shrub incorrectly, you should still have some flowers. And these hydrangeas should bloom from June until the first autumn frosts. One superb reblooming variety is called Endless Summer, and it’s not hard to understand why.

Once you have understood the problem, it really should be easy to fix it and the flowers will return next year to give you that summer spectacle that is expected of hydrangeas.