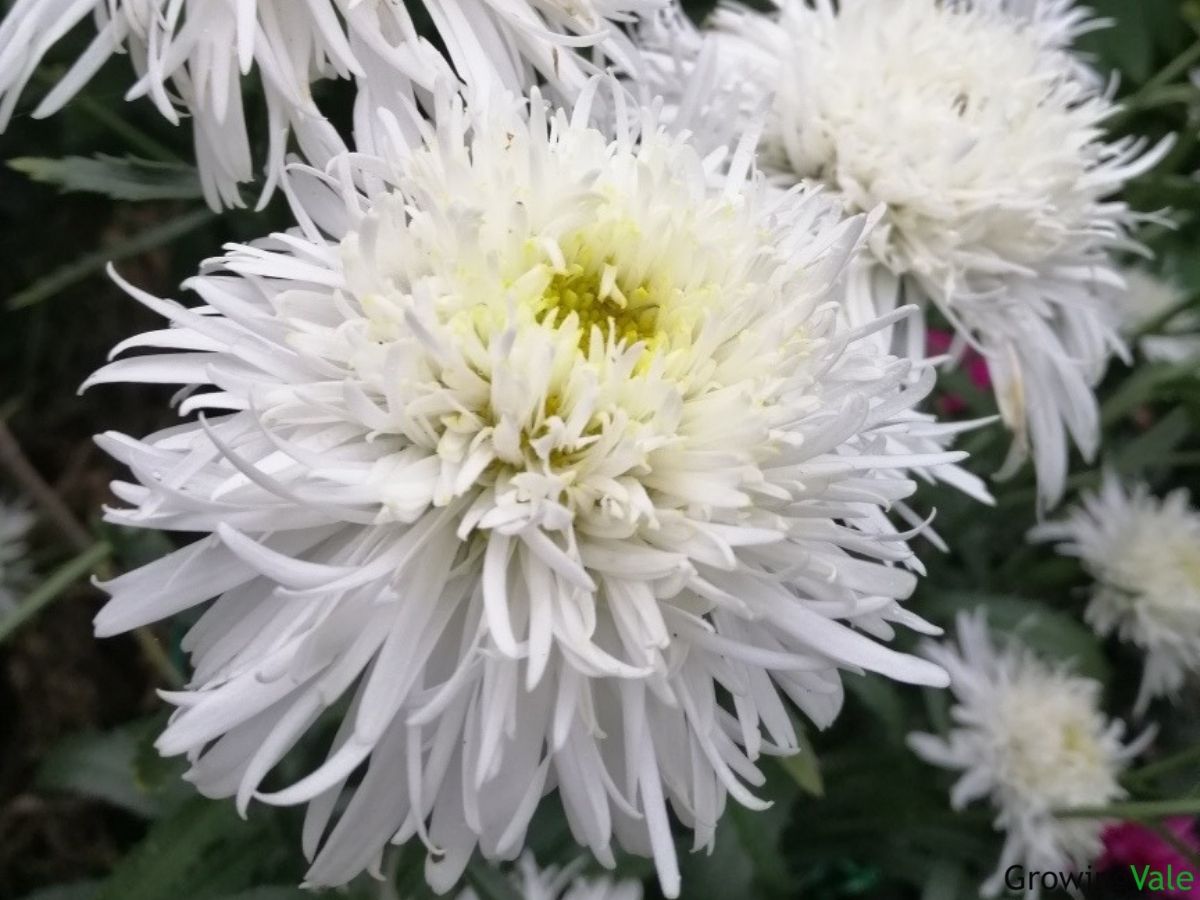 Chrysanthemums are one of the most popular flowers for both gardens and bouquets! They are part of the genus Chrysanthemum which contains roughly 40 flowering plants and is part of the Asteraceae family alongside daisies and dahlias. Garden and florist cultivars are fondly known as “mums” and have been given the classification Chrysanthemum x morifolium.

These beautiful blooms are herbaceous perennials that will bring delight to your garden in late summer through to fall. They look fantastic when planted along borders or in cottage-style garden beds, but are also a great choice for container planting so are perfect for patio or city gardens too!

Chrysanthemums are originally from the Far East. They have been cultivated in China since the 15th Century B.C. and were introduced into Japan in the 8th Century A.D. They are heavily depicted in East Asian art and pottery, and are celebrated in Japan during their National Chrysanthemum Day known as the Festival of Happiness!

They reached the West by the late 1600s and were named by famous Swedish botanist Karl Linnaeus in 1753. Their common name chrysanthemum is a combination of the Greek words “chrysos” which means gold, and “anthemon” which means flower. Many ornamental garden varieties available today are derived from Korean hardy hybrids that were introduced into the market in the 1900s.

There are over a hundred cultivars of Chrysanthemum x morifolium with many colors, forms, and bloom sizes. Colors range from yellow, orange, bronze, white, pink, red, and purple. Flower forms include anemone, decorative, single, pompom, spider, and many more. Chrysanthemums are relatively low-maintenance and would make the perfect addition to any garden!

How to Plant and Grow Chrysanthemums

Choose a sheltered spot to place the chrysanthemum plants. Those purchased in fall from nurseries need to be planted at least 6 weeks before the winter frosts to allow for root development. Otherwise, plant newly propagated plants or spring purchases after the risk of the last frost has passed in mid-May.

Harden-off newly propagated plants in April before planting out by placing them in a cold frame.

Roughly two weeks before planting, prepare the garden bed by loosening and breaking up the soil to a depth of 6 inches. Amend the soil with organic matter if required. For extremely poor soils, add 1-1.5 pounds per 100 square feet of fertilizer such as 5-10-5 and work it into the soil.

Immediately before planting, rework the bed to kill any newly germinated weeds. Dig a hole large enough to accommodate the root ball of either the chrysanthemum plant or the rooted cutting. Do not bury the root ball but plant it shallowly near the surface. Plant previously container-grown chrysanthemums at the same depth they were at in their pot.

Press down the soil firmly after planting to remove any air pockets, and water well to settle in. Space low growing, spreading types 24-30 inches apart, and regular varieties 12-18 inches apart. Apply 1-2 inches of course mulch on top of plants, plus another inch if planting in fall for extra winter protection.

It is possible to grow chrysanthemum flowers in containers, some varieties such as the cascading types are also well suited to hanging baskets. Tender varieties should be grown in containers so they can easily be brought indoors or into a greenhouse at the beginning of autumn. Select a large container with good drainage and fill it with a fertile potting mix.

If transplanting from another container, ensure the plant is at the same depth as it was previously. Container plants will require more frequent watering and fertilization, using a liquid fertilizer at the frequency specified on the package instructions. Place the container in an area that will receive full sun.

How to Propagate Chrysanthemums

Chrysanthemum plants can be propagated in several ways, these are through division, cuttings, and seeds.

Growing them from seeds is the least popular method since some varieties do not set seeds and those that do often produce plants inferior to the parent plant. However, charm and cascade types are readily available as seed packets from nurseries.

Chrysanthemum bushes tend to get overcrowded every few years and will need thinning out and dividing every three to five years.

For division, plants need to be at least two years old. Divide plants in springtime when new growth is 6-8 inches tall. Gently dig up the plant, and wash away a little soil to see the roots more clearly. Use a clean, sharp knife to separate new growth that already has its own roots.

Replant the new divisions shallowly in freshly prepared soil that is loose, well-draining, and fertile. This is also a good time to cut away and discard any diseased, dead, or old woody parts of the plant.

Propagation from stem cuttings is by far the most popular method to obtain new plants. Obtain cuttings in spring once plants have reached 8-10 inches high. Take 3-4 inch stem tip cuttings, and remove the bottom leaves exposing 1-2 inches of bare stem.

Plant cuttings either directly in their intended spot in the garden, or in a well-draining container. Use a mix of one part moss and one part sand, perlite, or vermiculite. Water the cuttings daily, and ensure they’re in a spot that receives some (preferably morning) sun. If rooting the cuttings in a container, a plastic cover is recommended to prevent wilting, but take care to watch the temperature does not exceed 75°F. A temperature of 65°F is ideal.

Expect the cuttings to root within 3-4 weeks.

Sow seeds around two months before the first frost, or sow seeds inside during winter. Use sterile seed compost, and keep the potting medium between 70 and 75°F. After one month, seedlings should be ready for transplantation. Expect them to flower three months after sowing.

Seeds can also be sown directly outside and thinned later on.

Here are some handy care and maintenance tips for growing chrysanthemums:

Plant chrysanthemums in fertile, well-drained soil. For clay soil types, amending with organic matter (well-rotted manure, straw, peat, or composted leaves) to improve aeration and drainage is vital. For other soil types, this is optional but always good practice.

In most places, rainfall will provide enough water for these plants. During dry periods, make sure to water them more frequently and never let them get to the point of wilting.

Before planting, amending the soil with well-rotted organic matter is recommended, at about two buckets per square yard. Before the end of April, add a general-purpose fertilizer at a rate of 40 ounces per square yard.

Plant them in an area that receives full sun. Chrysanthemums will flower poorly if planted in an area with insufficient light.

Avoid places where they will be exposed to artificial lights such as street or porch lights, as this may interfere with their flowering in response to shortening days.

Chrysanthemums are generally hardy to USDA zones 5-9 and can be grown as perennials in most places. However, in poorly drained soils or areas where winter temperatures fall below 23°F, they will require lifting and storing over winter.

Tender varieties will need to be transferred indoors in early fall either in their containers, or dug up and transplanted into the greenhouse.

Pests to keep an eye out for are aphids and leaf miners, these are relatively common for chrysanthemum plants. Earwigs, glasshouse red spider mites, and capsid bugs are occasionally a problem. Leaf and bud eelworms may damage non-heat-treated rootstocks.

Chrysanthemum rust is a huge and potentially damaging disease for these plants. Regularly check plants for signs, and remove and throw away infected leaves. Heavily infected plants should be dug up and disposed of. Never take cuttings from infected plants.

Powdery mildew can become a problem in dry conditions, and in wet conditions, grey mold and root rot can be problematic. `Chrysanthemum plants are also prone to several viruses which may stunt growth and cause unsightly leaf markings.

Pinch out small flowered cultivars once shoots reach 6-8 inches tall. Remove the light green tips to encourage branching. Generally, for early blooming varieties, pinch out new tips every two weeks until around June 10, for mid-season bloomers 10 days later, and another 10 days after for late-season chrysanthemums. Do not continue to pinch back after these dates as flowers will stop forming.

For larger flowered types, disbudding encourages a bigger and better central bloom by removing all side shoots and buds, only leaving the central, terminal bud on each shoot intact. However, for spray varieties, their “spray” form is vastly improved when you remove the terminal flower bud.

To prepare plants for winter, after flowering, cut them back to 8 inches from the ground leaving what is known as the rootstock. In areas where winter temperatures do not go below 23°F, it is possible to leave the chrysanthemum plants in the ground with a layer of protective mulch.

In colder areas, or in soils that have poor drainage, the rootstock will need to be lifted from the ground or their pots and stored in a frost-free greenhouse or cold conservatory. Gently shake off excess soil, and cut away any new green shoots or leaves, leaving only the 8-inch stems.

Put them in a shallow tray, lined with 2 inches of peat-free, multipurpose compost. Once the tray is full give the rootstocks a light covering of compost. Keep the compost just moist over the winter period.

If there is more than one chrysanthemum type being overwintered, it is recommended to label them so replanting the following year will be easier.

Chrysanthemums are toxic to pets, including dogs, cats, and horses, and are potentially harmful to children if ingested. Contact with foliage may cause irritation.

Chrysanthemum plants are extremely popular ornamental plants and have a firm place in the floral industry. They look fantastic planted en-masse in parks and public gardens.

In China, chrysanthemum flowers are one of the most important plants in terms of traditional Chinese medicine. Chrysanthemum tea is a well-known remedy for easing anxiety and stress, and evidence suggests that drinking it can improve heart health, boost the immune system, improve eye health, and more!

The shoots, leaves, and flowerheads of these plants are also consumed in salads. However, the taste can vary between individual plants. Always speak to a medical professional or thoroughly research before attempting to consume any plant.

There are so many wonderful types of chrysanthemum flowers to choose from, here is a list of some of the most popular Chrysanthemum x morifolium varieties:

Chrysanthemums or “mums” or mum flowers are one of the most important plants in the ornamental and floral industry today! Those bred for gardens and bouquets are classified as Chrysanthemum x morifolium and are part of the Asteraceae family. They are perennials and will bring late-summer to fall color to the garden year after year!

Chrysanthemums originally come from the Far East and were cultivated in China as far back as the 15th century B.C. They have a huge cultural significance in this region, with the Japanese celebrating a National Chrysanthemum Day, also called the Festival of Happiness! These plants play a large role in Chinese traditional medicine and are often consumed as tea to improve health.

Relatively low-maintenance, mum flower requires some light pruning for them to perform at their best, and in some cases, although hardy, will need to be dug up and overwintered.

Mum flowers are a wonderful choice for cottage-style or patio gardens and come in many varieties and colors. These delightful plants look lovely in any outdoor space, earning them their rightful place as a firm garden favorite!

Up next: Chrysanthemum Flower Meaning and Symbolism