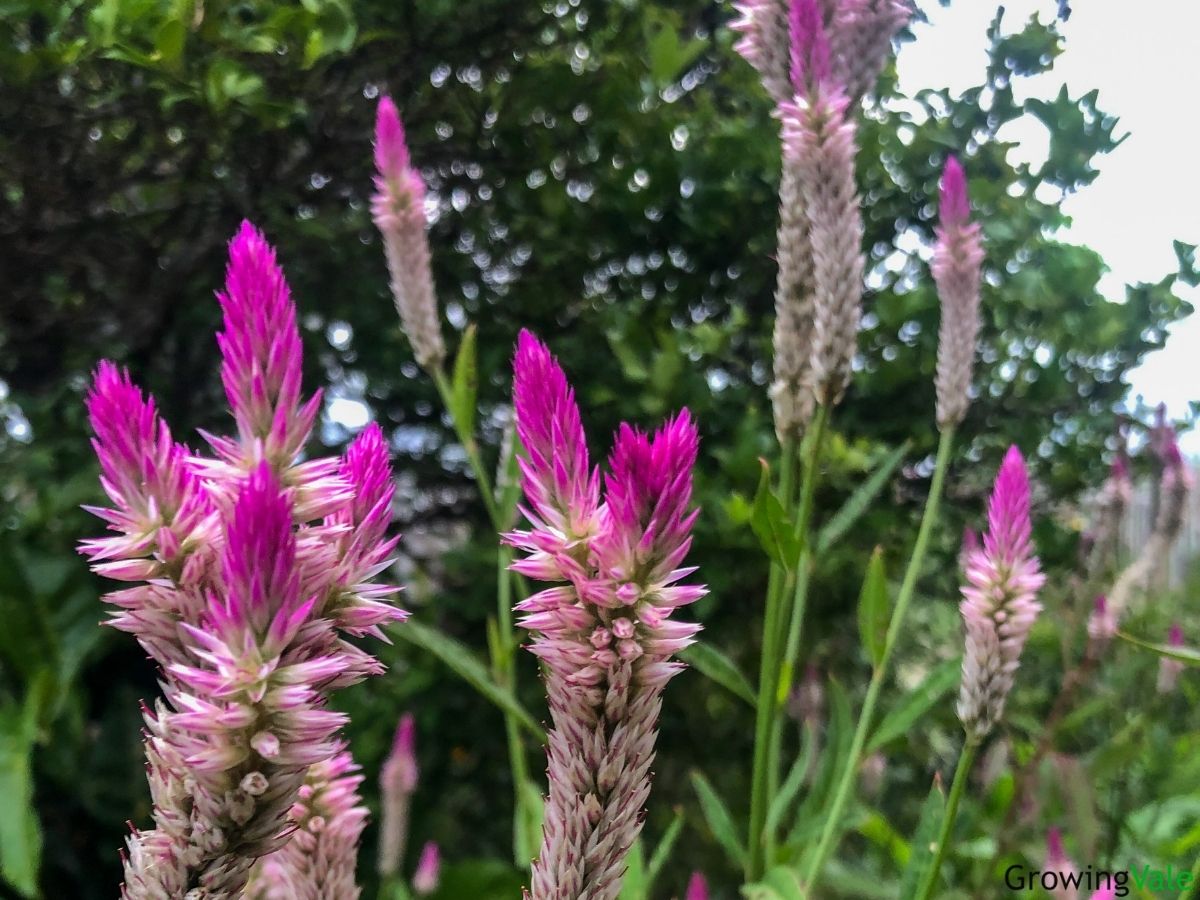 Cockscomb or Cock’s comb is a group of plants that belong to the genus Celosia. There are around 45 species within the group, several of which are cultivated as garden ornamentals! Cockscomb plants can be herbaceous annuals and perennials, or shrubs, and are known for their vividly colored flowers that often grow in plume-like inflorescences! Of the popular garden varieties, most are closely related to or cultivars of Celosia argentea.

These unusual plants are a fantastic choice for adding interest and bold color to garden beds, borders, and containers! They are extremely versatile, suiting cottage-style, informal, tropical, and prairie gardens, as well as patios, city gardens, and courtyards.

Cockscomb flowers are also wonderful for indoor displays and have long-lasting blooms that not only look fantastic freshly cut but dried too!

Celosia flowers are native to tropical and subtropical parts of North America, South America, and Africa. They are believed to have been first introduced into Europe in the 1570s and were hugely popular during the Victorian Era, becoming a staple in Victorian gardens! Their popularity continued into the 1920s and 30s where gardeners would compete in state/county fairs over whose cockscomb plant produced the biggest flower crest.

Their genus name Celosia is derived from the Greek word “keleos” which means “burned”. This is about cockscomb flowers, and most likely to the flower color of the indigenous species first introduced in the 1570s, which was dark red! Their common name cockscomb comes from the resemblance of some cockscomb flower forms to the comb of a rooster.

Since their introduction to Europe, many varieties of Celosia flowers have been cultivated with different heights, flower forms, and colors. Their flowers come in shades of red, pink, orange, yellow, and purple! Some people find that these flowers have an almost artificial, bordering on gaudy appearance to them, however, many find them absolutely delightful and a worthy addition to the garden!

How to Plant and Grow Cockscomb Flower

Garden varieties of cockscomb are tender perennials, grown as annuals in colder climates, and are relatively easy to grow! They can be sown directly into the ground or containers, or started indoors and transplanted outside later on. Young plants are also readily available from nurseries.

Before planting, always make sure the area has sufficient light, the right soil conditions, and if growing taller plants, is sheltered from strong winds!

Larger cockscomb varieties may benefit from staking. Use a bamboo cane 6 inches shorter than the final height of the plant and use twine to secure the plant loosely upright against the cane. As the plant grows, add more twine for more support.

To successfully grow cockscombs in beds, wait until the threat of frost has passed to put out seedlings or purchased plants. Make sure to harden off the seedlings before planting to avoid giving them a nasty shock! First, prepare the bed by thoroughly de-weeding the area, loosening up the soil, and removing any large rocks or stones.

Make a hole large enough to comfortably house the root ball, and gently tease out the cockscomb plant from its container taking care not to break any roots. Place it into the hole at the same depth it was growing in its container, fill in with soil, and firm the soil down around the plant. Water well to settle in.

Some gardeners argue that cockscomb plants grow better in containers, making them a top choice for patio gardens! Dwarf varieties are well-suited for container growing and are ideal if there’s not a lot of space in the garden.

First choose a suitable container, a large terracotta pot with plenty of drainage holes is ideal. Secondly, fill in the pot with a well-draining potting mix and either sow the seeds directly following the instructions below or transplant seedlings using the same method as above.

Leave at least 1 inch between the top of the soil line and the rim of the container to allow space for water to soak into the soil.

Try combining different heights and colors of celosia flowers in the pot for a more attractive and eye-catching display!

How to Propagate Cockscomb

Although cockscombs can be purchased from nurseries in spring, they can also be propagated at home from seeds! In the right conditions, they will also readily self-seed and while the unwanted seedlings are easy to remove, they can quickly become a pest in the garden if not minded. Deadhead spent flowers to prevent this from becoming an issue.

If sowing cockscomb seeds directly outdoors, wait until the threat of frost has passed (normally by late spring) and the ground temperature is over 70°F. Ideally, choose a sunny spot with at least 6 hours of direct sunlight a day, otherwise, an area with some light shade will do. Also, take into account that these plants need well draining soil, so amend the bed as needed.

Remove any weeds from the area and break up the soil removing any large stones in the process. Either scatter the cockscomb seeds randomly on the ground or sow them evenly in drills, firming them into the ground before covering them with a light layer of potting soil. Keep the soil moist, using a watering can fitted with a rose sprinkler head to avoid dislodging the seeds or disturbing the soil too much.

Expect germination within 2-3 weeks, and thin out seedlings once they’re established to prevent overcrowding, and promote good air circulation.

Many gardeners choose to get a headstart on the growing season by starting their cockscomb flowers indoors 6-8 weeks before the last frost. Start by filling a seed tray or modules with a seed mix and gently pressing the cockscomb seeds into the compost, using the spacing directed on the packet.

Sprinkle a light layer of compost or vermiculite on top of the seeds and give them a light watering using a watering can fitted with a rose head attachment and place the tray in a warm, bright place out of direct sunlight with a soil temperature of 65-70°F.

Make sure the compost stays moist and expect germination within 2-3 weeks. Once the seedlings have appeared, place the tray on a bright sunny windowsill or place them 3-4 inches under a fluorescent plant light for 16 hours a day. As the seedlings grow, move the light up.

Once their true leaves have grown, prick them out of the tray and plant them in small individual pots. They can be planted out once the threat of frost has passed and after they’ve been hardened off (starting 10-14 days before the transplant date).

Harden the cockscomb seedlings off by standing them in a shady spot for a few hours a day, slowly increasing it to the whole day. Towards the end of the 10-14 days, leave them out overnight. After this, they will be ready for transplanting.

Here are some important care and maintenance tips for your Celosia plants:

Keep the soil consistently moist during the growing season, but take care not to leave it overly saturated as cockscombs are susceptible to root rot!

Fertilize them every two weeks with a balanced liquid fertilizer, following package recommendations.

Celosia flowers perform best under full sun conditions with at least 6 hours of direct sunlight a day, however, they are tolerable of some light shade.

These plants can be grown in USDA zones 2-11, but they thrive in hot and humid conditions.

Cockscombs have few pest problems, but spider mites can be an issue, as well as aphids and glasshouse whiteflies when grown under glass.

These plants can develop powdery mildew, fungal leaf spot, foot rot, and root rot. To reduce these risks, never overwater the soil and space cockscomb plants out to allow for airflow.

There’s no need to prune cockscombs, however pinching them while they’re young will promote more branching and flowers, and deadheading spent flowers will prolong the blooming period and stop aggressive self-seeding.

Cockscombs are popular ornamental plants for gardens and are known to attract bees and butterflies, making them useful for pollinator gardens. They are also fantastic for dried flower arrangements as their flower heads retain their attractive color even when dried!

Celosia argentea var. argentea is eaten as a leaf vegetable in part of Africa and East and Southeast Asia. Their leaves are said to have a soft texture and taste mildly like spinach.

With so many wonderful Celosia varieties and cultivars, it can seem hard to choose! Here are some of the most common and popular cockscomb flowers:

Cockscombs are lovely garden ornamentals that belong to the genus Celosia and the family Amaranthaceae. There are 45 species within the genus, the most popular amongst gardeners being C. argentea and its close relations/cultivars! These are divided into 3 main groups based on their flower form: the cristata group, the plumosa group, and the spicata group.

Most of these are tender perennials but are grown as annuals in colder climates. They are easily grown by seed, but can also easily be purchased in nurseries, making them a popular bedding plant with a blooming season from June to September! Cockscombs grow extremely well in containers and their stunning flowers are perfect for adding interest and color to container gardens!

Their showy flowers are either feather-like (plumosa group), resemble a wheat sheaf (spicata group), or look like a brain coral or rooster’s comb (cristata group.) This versatility and range of sizes and colors make cockscomb plants a fantastic choice for a range of garden styles including cottage-style, prairie, and patio!