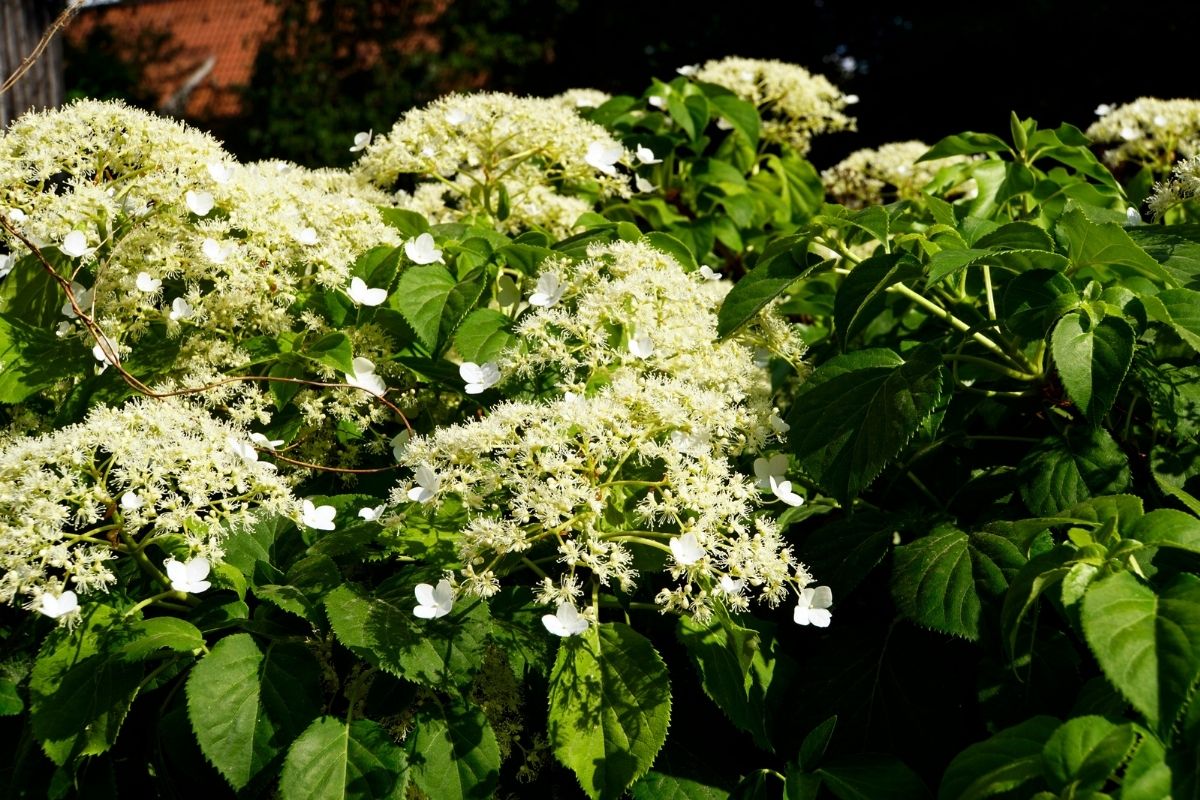 The climbing hydrangea (Hydrangea petiolaris) is less well-known than the showy mophead hydrangea.

This hydrangea is a large, perennial vine that needs substantial support for its heavy foliage and flowers. Its vines twine around the support available and also latch on with a network of aerial roots that form along its central stem. This hydrangea climber doesn’t need to be tied on or attached – it will do all this work itself, unaided.

Left unchecked, this hydrangea vine has the potential to grow enormous. However, it is possible to prune it to reduce its height, and you can also grow it as a bush or even use it for ground cover.

Most climbing hydrangeas are deciduous; a couple however are evergreen and in mild winters, may keep their leaves.

The climbing hydrangea is native to Japan and other parts of Asia. It was introduced to Europe in the early-1800s by plant hunters.

How to Plant and Grow Climbing Hydrangeas

A climbing hydrangea should be planted either in the sun or in partial shade. The sunnier the position, the more flowers will be produced on the vine.

This is a plant that can be grown up and along a wall or fence. It’s a great plant to use if you want to hide all or part of a damaged, unsightly wall. Once this hydrangea climber gets established, it grows rapidly, so you will have to prune it to keep it tidy.

It’s an ideal choice of climbing vine to grow up an ornamental arch, or to cover a decorative feature such as a trellis.

If you want a plant to use for a visually appealing ground cover, then you can use Hydrangea petiolaris without providing support. Having nothing to climb up, it will spread along and cover the ground instead.

As with all shrubs, the best time to plant is in the spring or fall. It is possible to plant the climbing hydrangea in the summer, but if you do, you must make sure it never dries out and is kept well watered.

If you are planting several climbing hydrangeas along a fence or a wall, the plants should be spaced between 5 and 10 feet apart.

Depending on the condition of your soil, it may be necessary to add some organic matter before planting. It should be well watered, both before and after planting.

When you plant the hydrangea vine, make sure it doesn’t sit deeper than it was in the original pot. And apply a mulch around its base. This will help to retain moisture in the soil around the plant’s roots and keep weeds at bay.

The hydrangea won’t need much encouragement to climb, but you will just have to make sure you provide some help for the vine for its first season of growth.

You can grow a climbing hydrangea in a pot, but only in a large one. You can’t plant a climber that will grow very large, in a pot that is the size of a small, shallow window box and expect great results. Even small climbers need room for their roots to expand, and conditions in a pot are often hot and dry out quickly.

It is also a good idea to select one of the smaller H. anomala petiolaris varieties for container growing.

All hydrangea types are relatively easy to care for, but there are some tips to help you get the best from your climbing hydrangea vine.

It is not unusual to have to wait for up to four years to see your climbing hydrangea established and taking off. Once it does, it will grow rapidly.

The soil needs to be rich and moist. But it shouldn’t be heavy or soggy. If necessary, add in some compost or other organic matter before planting to improve the condition of the soil.

To keep the soil damp, you need to make sure you water the climbing hydrangea regularly, especially during the summer. If you add a layer of mulch around the base of the plant, this will help to retain moisture and suppress weeds.

Newly planted hydrangeas need to be kept moist in the first few growing seasons, and will become established much quicker if they are regularly watered.

This hydrangea vine needs plenty of sunshine to flower well. But it shouldn’t be subjected to the heat of the afternoon sun in mid-summer, so some shade needs to be provided.

If your climbing hydrangea is designed to climb up a wall, it will do best if it is a north or eastern-facing wall.

In its natural growing environment, a climbing hydrangea will be growing in cool soil, in a damp woodland setting.

Don’t let a new plant dry out, especially during the summer.

Once the flowers have finished during the summer, you should decide whether you want to prune your climbing hydrangea. It’s not necessary unless you want to control the height or side growth of the hydrangea vine.

Flowers will form at the top of the climber, so any pruning needs to be gentle to avoid losing the following year’s blossoms.

If you wish to transplant a climbing hydrangea, do so early in the spring, or even in winter if the ground isn’t too hard to work. The day before you intend to transplant the vine, you should water it well. This will soak the root ball thoroughly and help with the transplanting.

Dig the new hole twice as wide as the roots of the plant. The plant should be planted at the same depth as it was, and some potting compost should be mixed with the soil in the hole. As you start to fill up around the roots, water the plant well, as this helps to bed the roots into their new planting position.

Water again, and cover the base with a mulch to help retain the moisture around the newly transplanted climbing hydrangea vine. It isn’t uncommon for a climbing hydrangea to take a couple of growing seasons to adjust to its transplanting, so be patient until it starts to regrow with vigor.

How to Propagate Climbing Hydrangea Vines

There are several ways to propagate climbing hydrangeas. One of the easiest methods is layering, which can be done during the spring. Simply select a healthy branch of soft, new growth that is long enough to reach the ground. Cut off the leaves along the stem and pin the branch to the ground. To encourage rooting, cut a small notch on the stem below a bud.

Water the patch of ground, cover with compost, and if necessary place a stone over the stem to keep it stable. Leave it for a season to establish its independent root structure.

Another effective method to propagate your hydrangea vines is to take softwood stem cuttings in the spring. Cut non-flowering shoots with 3 or 4 sets of leaves into 4-inch lengths. Only keep the top set of leaves and if these are large, cut them in half.

Using rooting powder is optional; it will speed up the rooting process, but is not necessary. Place the cuttings into a pot of potting compost, and once watered, either cover with a plastic bag or place them in a cold frame or unheated greenhouse.

Not too many problems will trouble your climbing hydrangea, and any leaf damage caused by insects will usually be cosmetic. If the problem does cause poor growth or leaf loss, you can treat it with an organic insecticide in July.

If your climbing hydrangea is left in waterlogged soil, it is likely to develop root rot. Unfortunately, if this occurs, there is no cure and the plant will die in just a few weeks. For this reason, it is important that although you should keep the plant moist, the soil should not become soggy.

The main use of a climbing hydrangea is as a decorative climber, it will reward you with lots of very pretty flowers over the spring and summer. If you want a climber to fill a space quickly, this is a good choice, although it may take a couple of years to get going.

Most climbing hydrangeas are deciduous, but there are a couple of evergreen types, Hydrangea seemannii and Hydrangea Serratifolia. However, in colder regions, even these evergreen varieties may lose their leaves during a cold spell.

The most well-known deciduous climbing hydrangea is H. anomala subsp. Petiolaris. This hydrangea vine will grow taller than 40 feet and up to 30 feet wide.

H. anomala subsp. Petiolaris “Mirranda” grows as vigorously and as tall as the above, and it is deciduous. It has attractive variegated foliage, which gives a further focus of interest to this cultivar.

There is a rare, highly sought after, and hard to find variety called Firefly. This is another variety of H. anomala petiolaris which has variegated leaves but with brighter and more vivid coloring than Mirranda.

If you are looking for a climbing perennial, you may not have considered a climbing hydrangea.  But if you want a climber that is adorned with fragrant lace cap flowers during spring and summer, that grows vigorously and requires little in the way of ongoing care, then  H. anomala petiolaris should definitely be on your shopping list.