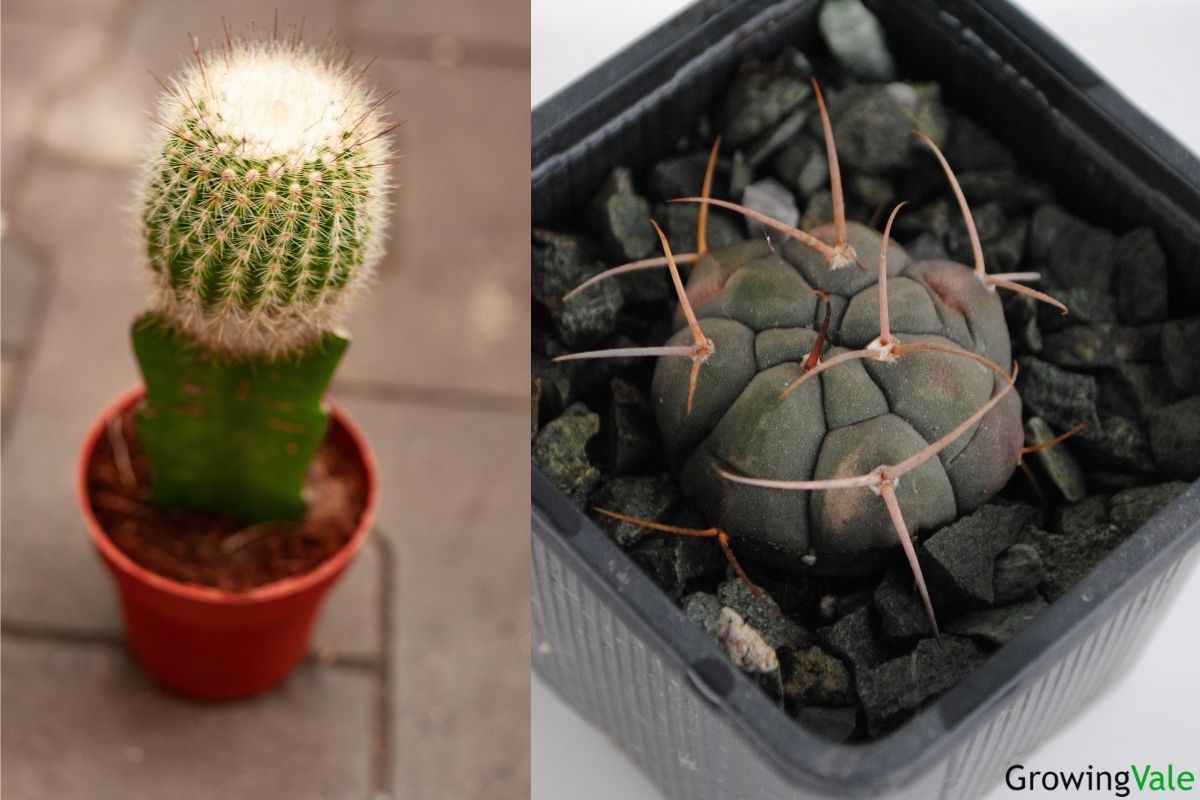 Cacti in the Gymnocalycium genus are commonly known as chin cactus. They are small growing cacti, mostly rounded in shape with ribs that have spines growing out of the areoles on the edges of the ribs.

The most stunning feature of most Gymnocalycium species is their array of stunning large and showy flowers. Most of these cacti have large flowers that open out to a daisy-like shape. They range in color from pinks to red and also white, cream, yellow, and salmon.

These types of cacti are very easy to grow as long as they get around 4 to 6 hours of filtered sunlight every day. They also like to be kept warm and are highly sensitive to overwatering.

Here is a selection of the most commonly grown chin cactus varieties.

This cactus has a flattened stem that is gray-green in color. It has several well-defined ribs with numerous areoles that are covered with thick white wool. Each areole has numerous, flattened sharp spines growing from it.

The flowers are quite showy and creamy in color with a pink blush. The centers are a rusty red. This species grows relatively slowly but flowers readily.

This is a low-growing cactus with a flattened or ball-shaped stem. The stem is covered with wooly areoles from which multiple long spines grow. In fact, the spines almost cover the little cactus beneath. The plant produces silky white flowers that have a bright pink mid-stripe.

This cactus is quite a fast-grower and flowers readily. It can even produce clumps if there is enough room in the pot for it to spread.

This chin cactus is another small variety that only grows to about 4 inches tall and around 6 inches in diameter. It can produce clusters of offsets if given space. The stem is quite smooth and bright green with areoles on the ribs that produce long spines.

The showy flowers are white or delicately pink and funnel-shaped. The plant will produce multiple flowers at the same time.

Gymnocalycium andreae can produce clusters that are only 6 inches wide. The plant has a depressed stem that is bluish-green in color. The areoles along the ribs produce only short spines.

In summer, this plant produces masses of pale yellow flowers that are bell or funnel-shaped. The outer petals have a dark green mid-stripe. This is one of the most cold-tolerant Gymnocalycium and can withstand temperatures down to 5 degrees Fahrenheit.

The dwarf chin cactus is a tiny cactus that only grows to about 5 inches in diameter. It has about 9 to 10 broad ribs with just a few areoles that have five to seven spines growing out of them.

This little cactus also flowers profusely and the flowers can be colored red, pink, purple, orange, or white. The flowers are funnel-shaped and appear in summer.

The most distinctive feature of this cactus is the long curling spines that resemble pairs of buffalo horns. The stem itself is rather flat and a blue-green color. This turns cherry-red when exposed to direct sunlight.

The flowers are produced at the crown and are funnel-shaped and creamy-white with a dark red throat.

This little cactus is not all that common in cultivation but it’s an interesting one to add to your collection if you can find it. It has a very flattened gray stem with only a few wooly areoles. Each areole has three longish spines growing from it that are slightly curved and flattened.

This species is extremely slow-growing but flowers readily. It actually has a long taproot so must be grown in a taller pot. The flowers are almost larger than the stem and are pearly white in color with a delicate pink mid-stripe.

This lovely little cactus produces clusters of stems to a height of around 1.5 inches. The stems are blue-green and have around 12 shallow ribs. Each rib has numerous wooly areoles with multiple white bristle-like spines. This gives the appearance of a hairy cactus.

Flowers are produced at the top of each stem and can be different shades of white and pink. These appear in spring.

This is a small solitary cactus with a blue-green stem. The protruding ribs are closely covered with wooly areoles that have numerous long sharp spines. The spines are fairly flattish and are slightly curved back towards the stem.

The flowers are white or light pink and have a reddish throat. These appear in spring and summer.

Gymnocalycium damsii is quite a plump little cactus that is free flowering and sometimes produces offsets. The stem color varies depending on temperature. In the warmer months, the stem is deep green but this changes to reddish-brown during the winter months.

The flowers on this cactus are typically white but can also be pale pink or deep purple. This species also has quite a few commercially produced cultivars.

When you look at this cactus from above, it really does look like it’s covered in white spiders. The stem itself is a blue-green color, quite round and a little flattened. It has rounded ribs covered with wooly areoles that have spines growing from them. These spines are white or pale pink and are flattened against the stem.

During spring and summer, this plant produces creamy white flowers.

This is another low-growing cactus that has many long, sharp spines. The stem is olive-green and slightly flattened. This cactus produces multiple flowers that are pure white or a lovely shade of pink.

This is an interesting little cactus with not as many spines as others. The cactus stem is globular with five rounded ribs. The ribs are sometimes a little flattened so it looks like someone has made the cactus out of clay or plasticine and put thumb marks in it.

There are only a few wooly areoles on each rib and these normally have three spines growing out of them. These spines are bent back toward the stem. This species also produces offsets and has flowers that are either white, pink or pale purple.

This is a tiny cactus that only grows to 1.6 inches tall. It can be quite variable in flower color and spination. The cactus has very defined ribs and wooly areoles with short, sharp spines.

Flowers can range in color. They can be either white, pale yellow, green or pink.

The ruby ball cactus is quite distinctive in that it has red-colored stems but these can also be orange, yellow or even white. These stems don’t contain any chlorophyll for photosynthesis. Therefore, they have to be grafted onto another cactus so that they can survive and grow.

This interesting specimen has heavily banded and very distinctive ribs. The ribs have numerous wooly areoles from which short spines grow. This cactus produces pale pink or purple flowers but is generally grown for its colorful stem.

This cactus has the most spectacular flowers. They are white in color with a very distinctive pale pink mid-stripe and a darker pink throat. The cactus itself has a flattened stem with broad ribs and quite prominent small sharp chins below each tubercle.

The plant also has sharp spines that grow straight out from the wooly areoles. When the spines get wet they exhibit a red color.

This cactus got its name from the abundance of flowers that it produces. The flowers are pure white with pink tinges on the tips of the petals. The cactus stem is a dark green color with multiple ribs and wooly areoles with quite long, sharp spines that are flattened against the stem.

This small cactus grows to around 8 inches in height and produces multiple offsets from its base. It has a pale green stem with prominent ribs. Each rib has quite a few areoles that produce longish spines that point outwards.

The flowers on this cactus are quite large (up to 3.2 inches long) and are white or pale pink. They have a reddish throat and the petals open all the way.

This rather bizarre-looking cactus has a flattish stem that is green but turns an orange-purple color when exposed to full sunlight. It has multiple ribs with funny little bumps that have wooly areoles and long spines. The wool covering on the areoles is a lovely creamy-yellow color.

The dainty flowers are white with a bright red or dark purple throats.

This is a low-growing cactus with a gray-green flattened stem with wooly areoles and rather flat spines. The flowers are a stunning pale pink with a deeper pink throat.

Seeing this small cactus in bloom is an amazing sight. The flowers are pearly white with pink mid-stripes and a deeper pink throat. Each stem can produce a mass of flowers all at the same time. These flowers can last for about a week and some will open in succession.

This is a slow-growing cactus and quite compact in size. Depending on whether the plant is exposed to direct sunlight, it can be dark bluish-green or exhibit a more reddish color.

This is another bizarre-looking cactus with a round, flattened stem that can change in color with the seasons. It can be either grey-green, olive-green or purplish-brown. The stem itself only grows to about an inch in height.

The flowers on this cactus are creamy-white and have a reddish throat. These appear in late spring and will generally stay open for around 12 days.

This cute little cactus has thick ribs and rounded bumps called podaria. Out of these grow around five short spines. The areoles are almost sunken into each podaria. The plant produces wide funnel-shaped flowers that are pale pink in color with a blush pink throat. The flowers are quite large compared to the size of the cactus.

This is one of the largest cacti in the Gymnocalycium genus. It can grow to a height of 3 feet, although it’s quite slow-growing. The cactus stem is dull-green and has numerous long reddish spines that turn grey with age.

The flowers on this cactus are white or pale pink with red throats and can appear in clusters at the top of the stem.

This cactus has the most stunning white flowers that have a crimson throat. It’s another slow-growing cactus with a noticeably flattened olive-green stem. The plant has around seven to eleven ribs with small areoles that produce three to five spines that are flattened.