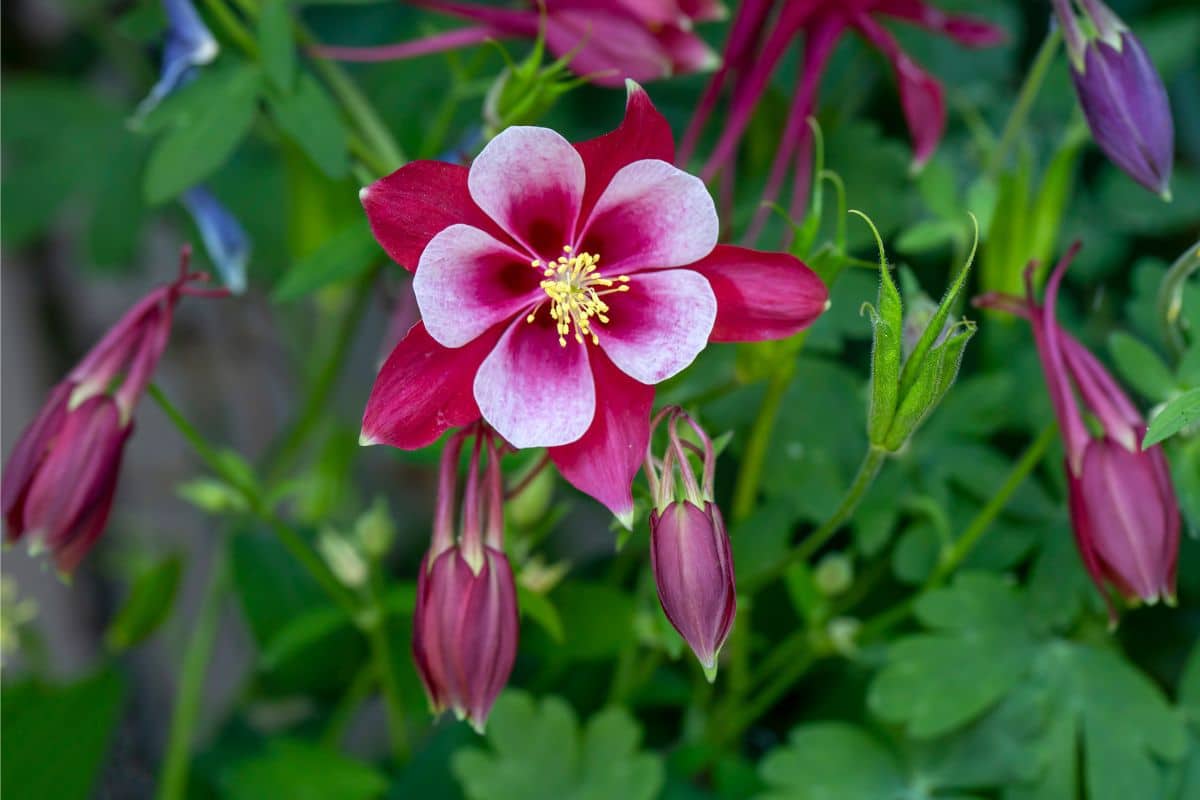 Columbines (Aquilegia spp.) are delightful spring flowers that every gardener should grow to add both color and whimsy to the garden.

Columbines or granny’s bonnet, as they’re sometimes called, are generally short-lived herbaceous perennials but will self-seed if the seed heads are left on the plant rather than dead-heading them.

Apart from adding some wonderful color to your spring and early summer garden, columbine plants are also a favorite with hummingbirds who love the sweet nectar that the columbine flower produces.

One of the major attractions of the columbine flower is the often two-toned petals. With modern hybridization, the range of colors and color combinations available is truly out of this world. It’s no wonder that these plants are so popular with gardeners around the world.

You might be interested to learn that columbines first arrived in North America around 10,000 to 40,00 years ago.

At this time, there was a natural land bridge between northeastern Asia and parts of Alaska and the Yukon. As these plants established themselves around Alaska, they began to spread southward into North America.

The genus Aquilegia was originally growing wild in Eastern Europe and Central Asia. After these plants made their way into North America, they evolved naturally to adapt to the changing climates and growing conditions.

Individual plants that started to grow in different regions produced their own particular characteristics. For example, blue columbines started to develop around the Rocky Mountains in Colorado. Therefore, you’ll find that the commonly named rocky mountain columbine is generally blue in color.

Different species also developed in response to the plant’s pollination by hawk moths. Some of these species even developed longer spurs to accommodate hawk moths with long tongues.

Another example is the red columbines that developed a higher nectar content in order to satisfy the needs of the hummingbirds who would feed from these flowers and aid in pollination.

All of this goes to show just how wonderfully adaptive nature can be.

How to Grow Columbine Flowers

You can grow columbine flowers by planting them in early spring. This herbaceous perennial is ideal for planting in the garden or will do quite well in large pots. Make sure that the pots you choose have good drainage.

Aquilegias can be grown from seeds quite easily or you can also purchase seedlings from your local garden center. Plants grown from seed in early spring are unlikely to flower in the first year. However, if you plant the seeds in the fall, you should expect flowers the following spring.

How to Propagate Columbine Plants

You can grow columbine flowers by propagating them using seeds or by division. Seeds should be sown in spring or summer once the soil has warmed up sufficiently. Sowing the seeds straight into the garden is the best way of doing this. However, you can start the seeds indoors before it’s warm enough outside.

You also have the option of letting your columbine flowers self-seed in the garden. To do this, let the columbine flowers produce seed heads and then leave these flower heads on the plant until they drop their seeds. Sometimes these seeds will be dispersed by the wind and end up in other areas of your garden.

It’s important to remember that only true native plants will grow true to their form when grown from seed. Seeds that derive from cultivars or hybrids will often revert back to the parent plant and may be entirely different from those currently growing.

It’s easy to collect your own seeds from the plants already growing in your garden. All you have to do is wait for the columbine flowers to produce seed heads and then collect these in a paper bag. If you shake the bag vigorously, the tiny shiny black seeds will break out of the dried seed pods.

The next step is to place these columbine seeds into the refrigerator over winter. This is a crucial step because the seeds will not germinate unless they’ve been exposed to cold temperatures for 3 or 4 weeks.

Once the soil warms up outside, you can take the seeds out of the refrigerator and sow them straight in the garden. Just scatter the columbine seeds onto the soil surface and press them down. It’s not necessary to cover the seeds with additional soil.

If you’re keen to start your plants indoors, you can sow the seeds into a tray containing some moist seed-raising mix. It’s crucial that you only cover these seeds very lightly with some more of the mix.

Place your seedlings in a warm, sunny spot and keep the soil evenly moist. It should take around 3 to 4 weeks for the seeds to germinate. Once your seedlings are 3 to 4 inches tall, you can plant them out into the garden. Make sure that you harden them off first though by exposing them to the outdoors gradually.

You can also grow columbine flowers by dividing established plants once they’re at least two or three years old. This can also be done in spring. Bear in mind that columbines have deep roots so you’ll need to go quite deep when you dig them up.

Here are the steps to take to divide your columbine flowers:

Columbines are fairly easy to look after. They prefer well-drained soil that has organic matter added to it. In hotter regions, it’s best to plant your columbines where they’ll receive morning sun and are shaded from the hot afternoon sun. In cooler areas, they will live quite happily in a sunny spot.

Columbines are also quite drought-tolerant once they’re fully established. However, during extended periods of dry weather, ensure that you give your plants a little water so that they don’t dry out completely.

These lovely plants also benefit from a regular feed at least once a month during their main growing season from spring through to summer. Use a fertilizer that is lower in nitrogen and potassium but has a decent level of phosphorus if you want an abundance of blooms.

Well-draining soil is essential for growing columbines. The soil should have plenty of organic matter added to enrich it. The soil pH can be slightly acidic, however, a neutral pH is best.

Ideally, these plants grow best in a free-draining sandy or loamy soil that has been enriched with compost. If you do have clay soil, make sure that you incorporate some organic matter to improve the drainage.

Once columbines are well-established, they are fairly drought-tolerant. This means that they’ll only need to be watered once a week if you’re experiencing no rainfall.

To determine whether your columbines need water, just test the top 1 or 2 inches of soil for dryness. If the soil is dry, you can give your Aquilegias a drink. Otherwise, just test the soil again in a couple of days.

These plants do like to be fed around once a month during their growing season. This is normally between spring and fall. It’s best to use a liquid or water-soluble fertilizer that has a balance of nitrogen and potassium and a higher level of phosphorus.

This will ensure that your plants produce plenty of delightful flowers and a good root system. Look for a fertilizer that is designed for flowering plants with an N:P:K ratio similar to 5:10:5

Columbine plants are suited to areas that get morning sun and a little shade from the hot midday and afternoon sun.

However, these plants will tolerate full sun in cooler regions and during spring. If you live in an area that gets really hot summers, it’s better to plant these little beauties in a spot where they’ll get some protection from the scorching afternoon sun.

These plants prefer cooler temperatures, especially in the warmer months. They can be successfully grown in USDA hardiness zones 3 to 8.

Flowering occurs best in areas that have a relatively mild climate as extended periods of hot temperatures will stop the plants from flowering.

You can encourage your columbines to produce a second set of flowers within a few weeks in early summer if you prune off the first set of spent blooms immediately after they have finished flowering.

To do this, you should cut the stems right back to the base of the plant where the leaves are. Make sure that you use a sharp pair of scissors, snips, or secateurs so that you don’t damage the rest of the plant.

You can also deadhead faded flowers by pinching them off the stems. You want to do this when there are additional flower buds on the same stem.

There are a few pests and diseases that may infect your columbine plants. Common pests include leaf miners, sawflies, and aphids. Columbines are also prone to a few fungal diseases such as gray mold and powdery mildew.

Here’s how to deal with all of these problems:

Uses of the Columbines

Columbines are mainly grown as ornamental flowers. They are ideal for brightening up garden beds and can also be useful border plants. They are particularly suitable for cottage-style gardens.

Columbines are also highly useful for attracting pollinators such as bumblebees and butterflies. Therefore, they are ideal for planting as a border around your vegetable garden.

There are innumerable varieties and cultivars of columbines available all around the world. Here’s just a short selection of some of the most popular ones.

Interestingly there’s another plant in the same family that looks very similar to Aquilegia. This is commonly called columbine meadow rue (Thalictrum spp.). This genus of plants has similar fern-like foliage but in gray-green and clusters of cottony flowers in a variety of colors.

Columbines are lovely spring flowering plants that have been grown by gardeners for centuries right around the world. Their dainty flowers are a delight to see and are highly attractive to pollinators such as bumble bees, butterflies, and hummingbirds.

These pretty flowers are relatively easy to grow and deserve a spot in any flower or cottage garden. They are known to self-seed regularly and you can choose to let these volunteer seedlings grow wherever they pop up.