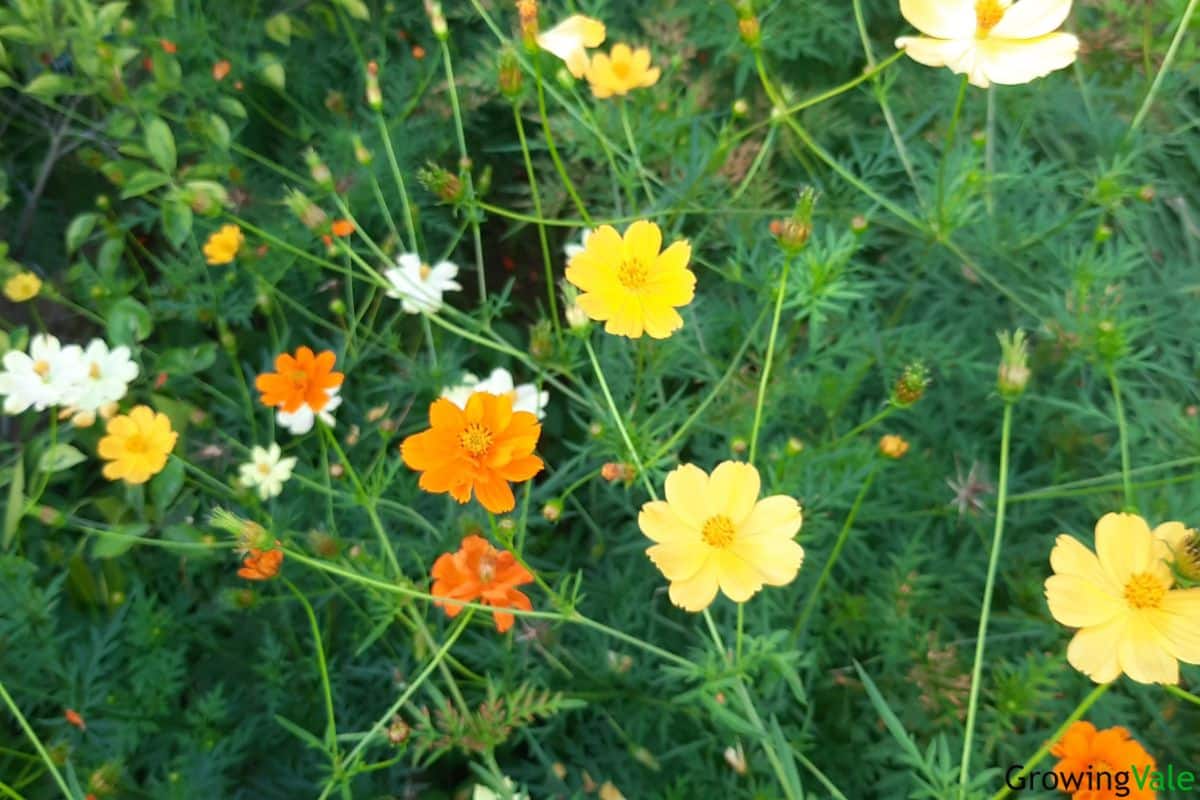 Cosmos are delicate annual daisy-like flowers that brighten your yard with glorious color all summer. The gorgeous blooms are a favorite with bees and butterflies and will attract these important pollinators to your garden in early summer.

Even the feathery leaves and slender stems are attractive and will add softness to your garden. Cosmos flowers are easily grown from seed and will spread freely if allowed to self-seed for the following growing season.

In other words, they’ll self-sow themselves so you’ll have more flowers the following growing season.

However, they are considered somewhat invasive in the southern parts of the US like Florida, so it’s best to grow them in pots if you live in this region and don’t want them to self-seed all over the garden.

All the commonly grown cosmos in gardens originate from Central America. Their botanical name Cosmos comes from the Greek word “kosmos” which has numerous different meanings. The most common ones are adornment, universe, and beauty.

These blooms have been grown for many centuries. In fact, it is believed that ancient civilizations in Latin America used the yellow and orange cosmos flowers to make dye.

In the late 1700s, a Spanish botanist by the name of Casimiro Gomez de Ortega brought some seeds from the Cosmos bipinnatus species to England.

How to Plant and Grow Cosmos Flowers

Cosmos grow happily out in the garden. They are great for planting en masse to create a beautiful and colorful display.

They are more often grown from seeds and if you leave the last blooms on the plants to go to seed, you’ll have them popping up again the following year.

Alternatively, cosmos grow in pots too. On average, you want to have one plant per gallon of your container size. Use a fairly heavy pot and make sure that it’s at least 12 inches (60 cm) in diameter. Make sure that the potting mix you use is not too rich, otherwise, the plants will grow too tall and leggy.

When growing cosmos in pots, you might find that you have to stake the blooms. Especially if you’re going to grow some of the taller cosmos flower varieties.

How to Propagate Cosmos Flowers

The easiest and best way for growing cosmos in your garden is to use seeds. However, it is also possible to propagate cosmos flowers using stem cuttings. We’ll explain how to either grow your cosmos from seeds or how to propagate new plants from stem cuttings.

How to Sow Cosmos Seeds Outdoors

You can either start your cosmos seeds indoors around 4 to 6 weeks before the last frost or sow them directly into the garden once the danger of frost is over. Here’s how to sow your seeds outdoors after purchasing them from the garden center:

Here’s what you need to do:

Chocolate cosmos (Cosmos atrosanguineus) does not have seeds that germinate readily. Therefore, it’s much more reliable to propagate this species by dividing the underground tubers.

Here’s what you need to do:

Cosmos flowers are very low-maintenance. The seeds can be sown into established garden beds and they make excellent cut flowers. These plants are fairly drought tolerant once they’re fully established and will even grow in poor soil conditions.

Cosmos will grow quite happily in poor soil where many other plants may not. They do prefer neutral to alkaline soils with a pH level between 6.0 to 8.0.

Cosmos don’t require special soil preparation. In fact, it’s wise not to grow cosmos in rich and fertile soils because this may cause the plants to grow too tall and fall over.

In order to stop the plants from falling over if your soil is too rich, you might need to stake them. Alternatively, you can grow them very near to other plants that will offer some support.

As mentioned, cosmos flowers are drought-tolerant once established. Therefore, they don’t need too much supplementary water unless your area suffers from a long period of dry weather.

You just need to ensure that young plants receive enough moisture for a few weeks until they’ve become fully established. However, during the heat of summer, if you see your plants starting to wilt, water them deeply at the soil level.

You do not need to fertilize your cosmos plants. In fact, too much fertilizer can encourage foliage growth and not very many blooms. If your soil has been enriched with a little compost before planting, this should contain all the nutrients that your cosmos flowers need.

Cosmos will flower the best when grown in full sun. Ideally, your cosmos flowers should receive around 6 to 8 hours of direct sunlight daily.

However, they will flower in part shade but not as profusely. These hardy plants will even thrive quite happily in the hottest conditions when exposed to full sun.

You’ll find though that most seed packets will suggest that you grow cosmos in full sun soil.

Cosmos flowers love the heat. In fact, they grow best in hot conditions and also don’t mind a bit of humidity.

Mulching is always a good idea for annual cosmos because it will prevent moisture evaporation and inhibit weed growth. However, you want to ensure to keep the mulch around 1 to 2 inches away from the plant stems.

If you plant your cosmos flowers fairly densely, they shouldn’t require staking because they’ll support each other. However, if your plantings are a little more sparse, you might want to stake individual plants to stop them from falling over.

Thin bamboo stakes are ideal for this because they’re not too intrusive but will provide enough support for each cosmos flower. However, if you have a large planting of these gorgeous blooms, you might want to consider using a trellis or other suitable support system.

In general, the plants themselves don’t require pruning. However, you should remove the dead flower heads regularly in order to keep the plant producing more blooms right through summer and into the fall.

If you haven’t had the time to deadhead your cosmos flowers regularly, you can give the plants a new lease of life by cutting the whole lot back by around one-third. If you do this, you’ll find that your plants will produce a second flush of gorgeous blooms.

When the blooming season has finally finished, you can just cut the plants right down to the ground or even pull them out. However, if you want some more cosmos flowers to grow the following spring, you should leave the plants until they’ve produced seed heads.

This will allow the plants to disperse their seeds and you won’t have to reseed them again in the spring.

Fortunately, cosmos flowers are fairly hardy and don’t have too many problems. However, there are a few concerns you might need to watch out for.

This fungal disease will cause your plants to wilt and the leaves to become discolored. Once your cosmos has succumbed to fusarium wilt, there’s nothing you can do to save it. It’s best to dig up the plant and dispose of it in the garbage to stop the infection from spreading further.

Powdery mildew is a common problem for many different types of plants in the garden. It can also infect your cosmos plants. This is a fungal disease that is spread by spores through the air.

If your cosmos plants are infected with powdery mildew, you’ll find that the leaves have a white powdery-type coating.

You can prevent your cosmos plants from getting powdery mildew by growing them in full sun and making sure that they have good air circulation around them.

It’s also a good idea to only water your plants at the root level and avoid getting the leaves wet.

Many gardeners have had success controlling powdery mildew by spraying their plants with a mixture of milk and water or you could try a proprietary fungicide.

This is a disease that is spread by leafhoppers. It can be quite common for plants in the Aster family. Evidence of this disease appears as yellow mottling on the leaves and stunted or distorted blooms.

There is nothing you can do to treat this disease so it’s best to just pull the plants out and dispose of them in the garbage.

Therefore, you want to be quite careful about how you treat any insect infestation on your flowers so as not to harm the beneficial insects that offer biological control in your garden.

Thrips feed on the flowers but generally won’t harm the plants. To control these, you can use an oil-based product such as neem oil.

These annoying pests can usually be found on the undersides of the leaves and can easily be identified by the tiny webs that they create. They are best treated with an oil-based product such as neem oil.

Primarily, cosmos flowers are used as ornamentals in the garden to provide plenty of gorgeous color in summer. These flowers are ideal for planting in drifts along pathways or in sunny flower beds.

Ideally, you want to plant tall cosmos at the back of the flower bed and plant shorter growing flowers in front of them.

They also make excellent cut flowers and this makes them popular with cottage gardeners. For longer-lasting flowers, be sure to add some sugar to the water in the vase.

Because these lovely flowers are so good at attracting pollinators, they can also be planted as a border around your veggie garden. Or, as companion plants in and around fruiting crops.

There are three species of cosmos flowers that are grown by home gardeners as well as many different cultivars.

Some perennial cosmos varieties will have large and striking single flowers on long stems while others will have gorgeous double blooms.

Cosmos sulphureus (sulfur cosmos) has golden yellow flowers that can be single or semi-double flowers. These plants are tall cosmos and can grow to around 48 to 72 inches tall. However, many of the recent cultivars have shorter growth than the taller varieties and their flowers tend to be more orange in color. Cultivars in this species tend to be the most heat tolerant.

Cosmos bipinnatus (garden cosmos) come in a variety of different flower colors including white, orange, yellow, purple, pink, and red. Cosmos bipinnatus is also native to Mexico and is the most commonly grown garden variety.

Cosmos bipinnatus can grow to a maximum height of around 4 feet. Therefore, this species is another tall cosmos. It is not quite as heat tolerant as Cosmos sulphureus but it will still thrive in bright, sunny spots in your garden.

The chocolate cosmos is native to Mexico. This species has dark red flowers that have a delicious chocolate scent. This particular species actually grows from underground tubers and requires a little more care and maintenance than the other two primary species.

You’ll also find that these flowers do not grow reliably from seeds. Therefore, the best way to propagate this species is by division of the underground tubers.

Some of the more popular cultivars include:

Cosmos flowers can be a colorful and beautiful addition to your summer garden. Ideally, they should be grown in full sun and don’t need rich soil. They’ll respond to a little extra watering while they’re young but are drought-hardy once they’ve become fully established.

Not only are cosmos flowers easy to grow, but they are also excellent at attracting pollinators to your garden. This makes them ideal for growing near your veggies and other fruiting plants. And, to top it off, cosmos also makes really good cut flowers so you can enjoy them indoors as well as in the garden.

So, if you’ve wondered “are cosmos easy to grow”. then the answer is definitely yes.For more flowers to grow, see our list of flowering plants.