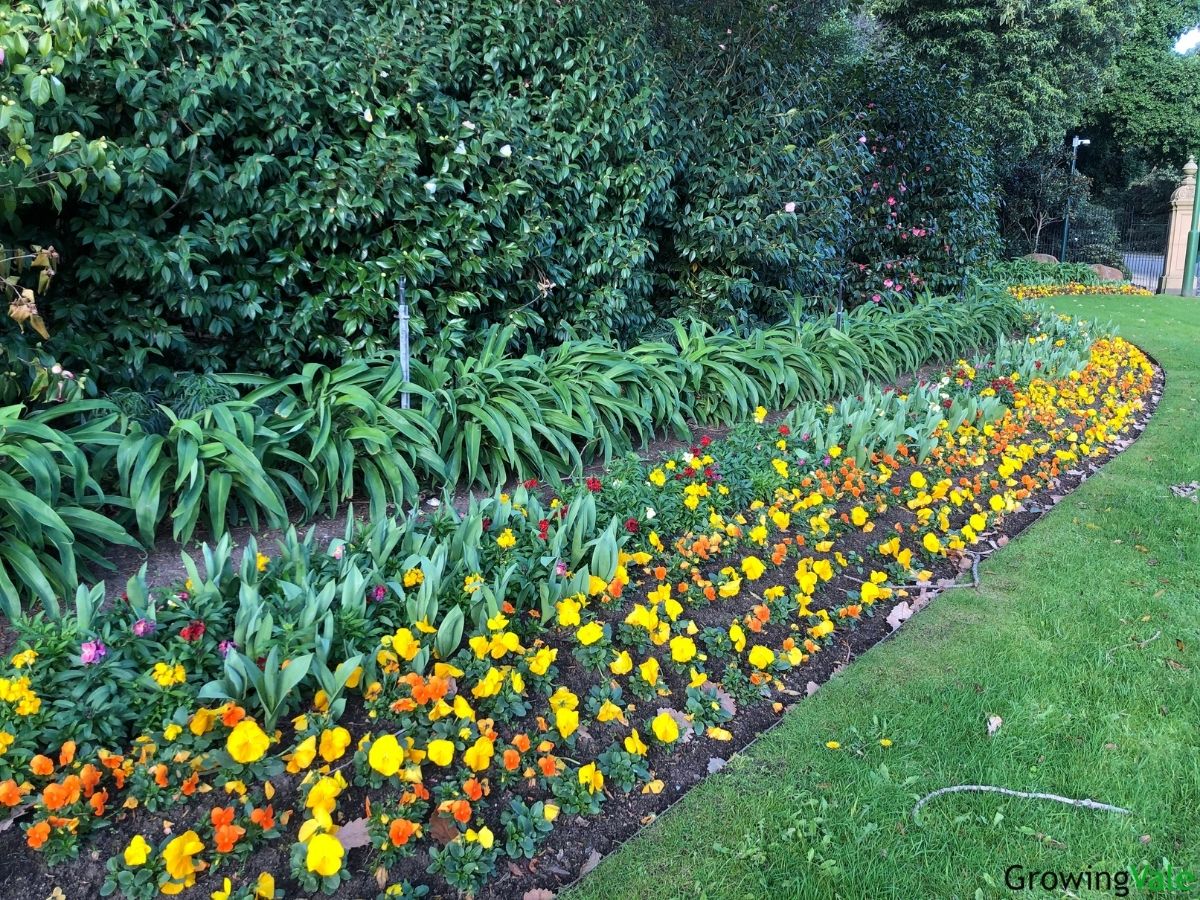 There are so many incredible and beautiful types of flowers that sometimes trying to decide what plants to include in your garden can prove to be a bit of a challenge! Not only that, but different plants have specific needs and this will definitely need to be taken into account when designing your outdoor space.

To make navigating the world of flowers a little less daunting, here’s a list of the best blooms to grow in your garden, all beginning with the letter B:

Baby blue-eyes are native to the Western US and Baja California. They are small, low-growing annuals that only reach between 3 and 6 inches high. Under regular conditions, they have a long blooming season beginning in February and lasting until June. These little wildflowers look best planted in large drifts where their vivid flowers will carpet the ground in a sea of blue!

Flowers grow up to 1.5 inches wide, are cup or bowl-shaped, bright blue, and have white central eyes. They are great for edging pathways and are tough so can withstand a little light foot traffic here and there.

These extremely popular meadow annuals also go by the name cornflowers. They originally come from Europe but are widely cultivated because of their attractive flowers! Flowers are carnation-like, fully double, and usually a lovely shade of blue-purple, although cultivars exist in a variety of colors.

Bachelor’s buttons are easy to grow and may reach heights of 3 feet with gray-green foliage. Flowers emerge from late spring until summer and can be deadheaded to prevent self-seeding. They are popular as cut flowers for fresh or dried bouquets.

This plant is an easy-to-grow, clump-forming perennial that also goes by the name Chinese or Japanese bellflower. Its common name “balloon flower” is about its unique flower buds that swell up like a balloon, before bursting open and revealing a starry flower!

Its flowers are 2-3 inches wide and are typically blue-purple, although pink and white cultivars exist. There are also double-flowered varieties. Plant them in rock gardens, or along borders in pollinator gardens and consider staking taller cultivars to keep them looking neat and upright.

Bells of Ireland is a rather unusual annual plant that will surely be a talking point in any garden. Despite their common name, these plants are native to Western Asia. They can be up to 3 feet tall so are great for adding some height to borders! Staking may be needed to keep their showy flower spikes upright and neat-looking.

They have curious, cup-shaped, green flowers that have smaller, fragrant white petals in their centers. Their flowering period is from mid-summer to fall, and their showy spikes are popular for bouquets or dried floral arrangements.

Scadoxus multiflorus, known commonly as the blood lily or the African blood lily is an exotic-looking bulb that will certainly grab everyone’s attention! Its spherical flower heads can grow up to 6 inches wide and grow in neat clusters of scarlet red flowers. Each bloom has 6 narrow spreading petals and golden-yellow stamens.

From a distance, blood lilies have almost feathery flower heads that sit on top of 12-18 inch stalks. These tender plants are well-suited to container-growing where they can easily be moved indoors to be overwintered as houseplants in cooler regions. They make a great choice for patios, balconies, or decks.

Barrenworts are herbaceous perennials that are found in several places worldwide, with the largest concentration of species being found in China. They are long-lived and begin blooming in mid-spring, lasting as long as 6 weeks! They prefer partial shade and are low-growing plants that only reach a maximum of 10 inches high.

These plants are wonderful for adding ground cover, with flowers that come in a range of colors such as red, orange, white, yellow, and pink. Often called fairy wings or bishop’s hat, their interesting blossoms resemble columbine and bring lovely color into the fall!

Basket of gold is a vibrant plant and a member of the mustard family. It is low-growing with a spreading habit, making it ideal for providing some ground cover! Native to areas of Central and Southern Europe, it has profusions of sunshine yellow flowers that grow in densely packed clusters that persist week after week.

It is used to growing in dry, average quality, rocky soils, lending it particularly to rock gardens. Otherwise, it looks extremely attractive in raised beds or large containers where it will spill over the edge.

Bergenias are shade-loving perennials that will thrive in wooded areas. They are great for adding ground cover thanks to their low-growing and clump-forming nature, in addition to their thick, glossy, evergreen leaves! Their pink, white, or purple-red flowers typically emerge between March and May depending on variety, but in milder climates blooming time can be as early as December.

Their delightful, little bell-shaped flowers grow in loose clusters or panicles, on top of upright, sturdy stems. In some species, their green foliage may turn a bronzy color in fall. Remove spent flower stalks through the flowering season to keep the border neat.

Without a doubt, one of the most recognized tropical flowers worldwide, the bird of paradise plant, a South African native, has unmistakable, showy blooms. It was named after the exotic jungle bird, another species that simply demands attention! Its foliage is blue-green with long oblong-shaped leaves.

Strelitzia reginae, the most well-known bird of paradise flower, has dark blue and orange flowers that resemble a bird’s head. Other Strelitzia species have different color combinations, but similar flowers. These are a must-have for any tropical garden, as well as being hugely popular houseplants!

Back-eyed susans are short-lived perennial or annual wildflowers. They are perfect for bringing some cheer into the garden as their vivid flowers will brighten up any space! They have a maximum height of 3 feet and grow as wide as 2 feet, and look fantastic planted in groups along sunny borders.

Their blooms emerge from spring and last until fall and are great for attracting pollinators into the area! Flowers are daisy-like with 8-20 golden yellow, orange, or bi-colored petals, and dome-shaped dark brown centers.

These delightful plants are low-growing, mounding perennials that reach a maximum height of 1 foot tall. They are also known as rock daisies or plains blackfoot and are top choices for rock or prairie gardens because they prefer dry, rocky soils.

At a glance, they seem rather unassuming, but their lovely broad white petals and sunshine yellow central discs will brighten up the garden from spring until fall! Their flowers are fragrant and smell like honey, attracting all sorts of pollinators into the area.

Bleeding hearts (Lamprocapnos spectabilis), also called common or Asian bleeding hearts, are extremely recognizable plants due to their signature heart-shaped flowers! They come from forested areas with dappled shade, making them well-suited to woodland margins or the more shaded areas of the garden!

They have delicate flowers that hang down on arching stems that will last a long time once cut, lending them to bouquets and indoor displays. Blooms are pink and white, although pure white cultivars exist, and are favorites for containers in patios or cottage-style gardens.

These perennials are members of the poppy family and are great choices for woodland gardens. Their common name is after the dark orange-red sap that comes from their roots and stems when they are damaged or cut. Bloodroots are native to North America and their sap was used by Native Americans as a dye!

Bloodroots are colony-forming and under the right conditions will spread. Flowers are born individually on stems with a leaf that initially fully wraps around the flower bud. Eventually, the flowers begin to open and rise a little above the foliage below. Blooming season is fleeting from March until April so time is limited to enjoy their white petals and bright yellow centers.

Blue ginger is an incredibly showy, tropical plant that despite its name and uncanny resemblance, isn’t actually a true ginger! They have dark, glossy green leaves and thick upright stems which bear terminal clusters of sapphire blue flowers.

These perennials form tight clumps reaching up to 6 feet and prefer being in partial to full shade. In regular growing conditions, they will bloom over summer and fall. Blue ginger plants are a must-have in any exotic garden and will look sensational growing alongside heliconias or torch gingers.

This North American native wildflower can sometimes be called blue verbena. It is a herbaceous perennial that can grow as tall as 5 feet with a long blooming period from June to September! Historically, blue vervain has been used to treat several ailments including abdominal pain and infections.

Flowers grow on small 5-inch spikes that branch off the main stem, resembling a candelabra. They are blue-purple and said to be a good source of nectar for bees, butterflies, and other insects. Not only are these important plants for pollinators, but blue vervain is also a food source for rabbits and birds.

Also known as hedgehog sage, blue witches hat is a perennial shrub found naturally in South Africa. It belongs to the mint family and is an important food source for bees, butterflies, and even grasshoppers! Its common name comes from its flowers which are blue and grow on a cone-shaped spike that resembles a witch’s hat.

These plants may grow as tall as 8 feet without pruning, and bloom in the fall producing masses of dark blue flowers on their showy spikes.

Bonesets are said to be named after their use in traditional medicine as a treatment for helping to set broken bones. They are perennials that grow between 3 and 6 feet high and are found in the wild growing in wet environments. Because of this, bonesets are often grown in rain gardens!

Their flowerheads are clusters of fuzzy-looking white blooms that will bring butterflies into the area. These plants make interesting cut flowers, either fresh or dried, and their dried leaves made into a tea were a folk remedy for fevers. However, all parts of the plant are considered toxic.

These evergreen shrubs are native to tropical America and are a group of around 30 species. They are well-loved for their showy and attractive flowers that are often grown as houseplants or in greenhouses in cooler climates.

Flowers are long, narrow tubes with 4 petals and 4 stamens. Their lightly fragranced flowers are known for attracting hummingbirds and have a long vase life of up to 20 days! They come in various hues of white, pink, and red that look marvelous in bouquets.

Brunneras are clump-forming, woodland perennials that have lovely forget-me -not-like flowers! They prefer to be grown in rich soils under shade, making them a top choice for woodland or shade gardens. Their large, sometimes decorative leaves contrast nicely with their delicate blue-purple flowers that rise above the foliage on upright stalks.

They are prized more for their foliage than their dainty blooms, with several cultivars with variegated leaves of different colors! Brunneras are relatively low-growing and will spread slowly via rhizomes, so they make great ground cover.

The butterfly pea or blue pea is a tropical vine that originally comes from Africa or Eastern Asia. Its flowers are pea-like and a vivid shade of blue-purple with a yellow or white throat. Cultivars exist in white, lavender, and other shades of blue, as well as double-flowered varieties.

Butterfly peas are known for attracting pollinators and in the right climate will bloom all year long! Flowers can be dried and used to make a bright blue tea rich in antioxidants.