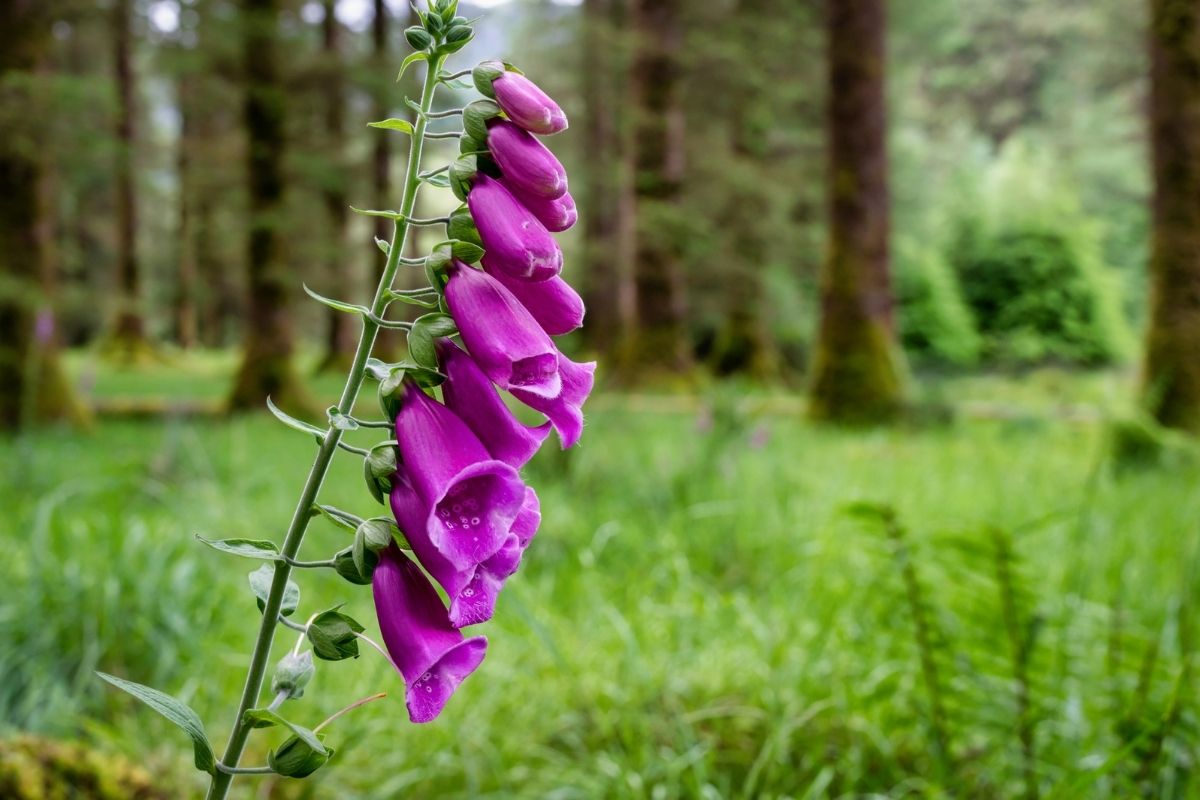 The foxglove flowers look very similar to the Snapdragons, but don’t let their appearance fool you because this is an entirely different flower! You read that right! Foxgloves may be a close relative to Snapdragons, but they are unalike in many ways.

For one, the meaning and symbols behind Foxgloves and Snapdragons differ from each other! In fact, the literal meaning of a Foxglove flower is insincerity and falsehood. Interestingly, white foxgloves represent openness and purple foxgloves symbolize inspiration.

Foxgloves first came to popularity in the 12th century. They were defined as biennial or perennial erect herbs with showy racemes of tubular flowers. You can frequently find these florals in gardens as ornamental decorations. You can learn how to grow foxgloves and have a beautiful colorful garden.

The flowers belong to the genus Digitalis of the Plantaginaceae or Snapdragon family. The genus name Digitalis comes from the Latin word digitus meaning a finger. If the name of the flower and genus doesn’t ring a bell yet – well, it is referring to the flower’s shape! Its overall floral shape resembles fingers but in this case the fingers on a fox’s paws!

Digitalis flowers go by many other dainty names such as fairy or folk’s gloves and fairy bells – just to name a few! They are native to some regions of Europe and the Mediterranean as well as in the Canary Islands.

Foxgloves bloom from late spring to early summer. There are about 20 amazing foxgloves species wherein some of which are considered top garden favorites. These include the common Foxgloves (D. purpurea), the Yellow Foxgloves (D. grandiflora), the Spanish Foxgloves (D. thapsi), and the Grecian Foxgloves (D. lanata).

Foxgloves symbolize something very close to what an actual fox symbolizes. Foxes as animals are known to be very sly and mischievous – something of the same sort goes for a Foxglove blossom.

In the language of flowers, the Foxglove symbolizes a treacherous magnificence – in a way it speaks the message of you are beautiful but careless!

The Digitalis flowers are also associated with mystical figures such as the zodiac sign Taurus and the Roman goddess of love and beauty, Venus.

A Digitalis flower has a very intriguing meaning. In the most basic sense, it means positive and negative energies of harm and healing. Something quite out of the ordinary for a floral meaning.

Don’t worry about that intriguing meaning because there are a whole lot of other meanings behind this flower! From another perspective of understanding, Foxgloves mean youthfulness and stateliness. Sometimes, it can also mean falsehood, insincerity, and selfish wishes – this is because of the attributes of a sly fox!

Although the message this flower bears quite a catch – be alert, trust your instincts, and stay grounded!

Foxglove flowers bloom in many different colors, here’s the symbolic meaning of each color:

What does a White Foxglove Flower Mean?

White flowers convey the meaning of openness. Having been more open, it will also allow more growth and creativity into everyday life.

What does a Blue Foxglove Bloom Symbolize?

What does a Pink Foxglove Floret Indicate?

Pretty in pink is not only what this flower means! In a way, pink flowers indicate a newfound hope and a mix of positive feelings.

What does a Purple Foxglove Blossom Represent?

Wisdom and a deeper sense of spirituality are represented by a purple Foxglove flower in bloom. In a more spiritual tone, these blooms also embody inspiration and determination.

What does a Yellow Foxglove Flower Symbolize?

Brightly yellow flowers symbolize both booming confidence and unwavering trust. In what aspect? Well, the confidence and trust in all things good and bad!

What is the Cultural Significance of a Foxglove Bloom?

In the Victorian language of flowers, Foxglove blossoms were regarded as beacons of insincerity.

What are the Folktales Associated with a Foxglove Floret?

The foxglove plants famously got its name from this certain folktale. According to the story, the flowers were believed to be worn by foxes while on the hunt! They wore the finger-like blossoms on each paw to silence their footsteps for better stealth. Some say that after the hunt, the flowers were removed – scattering the seeds. After some time these seeds sprang in bloom in what they believed were areas very close to the den where foxes raise their young!

If you’re on the hunt for a fox, just look to the Foxgloves and they’ll guide you what you seek!

Sadly, there is also an old folktale going about how these flowers have power over life and death. The story says that the plants are poisonous in nature although with curative properties. In certain witchcrafts and spells, these flowers were used to heal not only the living but also raise the dead!

What is the Spiritual Influence of a Foxglove Blossom?

A Digitalis flower has the spiritual capacity of gently cleansing your nature – purging and healing your body inside and out. It invites the courage deep within to bolster natural and clean energy into the mind, body, and spirit.

Such blossoms also aid in the healing, supporting, and strengthening of the physical and energy heart – which wanes from past traumas. It is a protector and guardian from unwanted evil and darkness in life.

What does a Foxglove Floral Tattoo Symbolize?

With what this flower means and symbolizes, it is not the top choice for a floral tattoo. But do not judge too hasty because the symbolism behind this tattoo is nothing like the meaning behind the flower itself!

If you would like to get a tattoo of this flower, do know that it will symbolize good health and healing. Additionally, it is also an embodiment of eternal youth and timeless beauty!

Common foxglove flowers are a garden ornamental favorite because of how they attract bees and hummingbirds – the perfect floral pollinators! Surprisingly though, these flowers bear no scent.

You can grow foxgloves from seeds. Foxglove seeds are small and black in color and germinate quickly compared to many other flower seeds.

It can also be decorated as a potted plant indoors or outdoors as well as a cut fresh flower in bouquet and vase arrangements.

There was a folktale about the poisonous yet curative properties of the Foxgloves – surprisingly, some of the sayings in these tales are true! During the 18th century, Dr. William Withering discovered the flower’s potential in the field of medicine. A chemical compound called digitalin was obtained from the flower. It was later discovered that this compound could be used to treat heart failure caused by high blood pressure.

In China, a traditional cultural practice of drying the flowers into a decoction was used as a uterine stimulant. It also included antibacterial properties which were said to be effective in treating nephritis. A Celtic practice in Europe also traditionally used the leaves crushed into powder as a cardiac glycoside. Meanwhile, in the British Isles, such practice was used to treat tumors, ulcers, and headaches.

A word of warning that it’s a must to always consult a medical professional before using foxglove plant or any part of it for medical purposes.