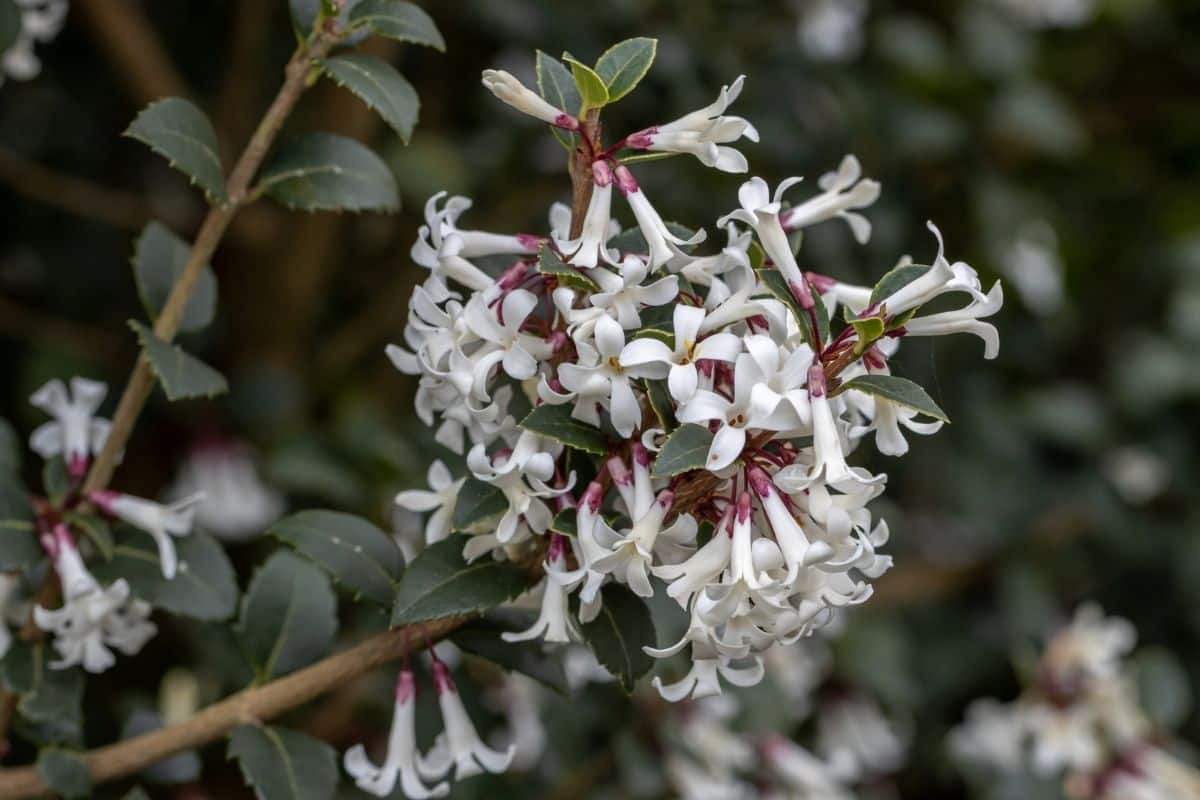 Now here is another flower whose name seems very peculiar at first. If you look at it closely, it slightly resembles a flower most popular during the Christmas season. What could it be? Well, it is none other than the Holly plant with its bright berries, delicate flowers, and holly-like leaves!

There is a lot more to this flower than just its other floral look alike. Behind its intricate blossoms behold meanings and symbolisms that are just too good to be true! Want to know what these are? Well – keep reading to find out!

The rise to floral fame of the Osmanthus dates back to the 18th century. During this time, the flowers were first introduced to Europe from across the seas from Southeast Asia. It is then defined as an evergreen shrub or tree with bisexual flowers closely resembling Hollies. These flowering plants are commonly cultivated for their edible fruits and leaves.

The Osmanthus flowers belong to the small genus of Osmanthus of the Oleaceae or olive family. It is so small that in fact there are only 15 known species of this genus to date! Its genus name comes from the Greek words osme meaning fragrant and anthos meaning flower. Quite literally, the genus name means a fragrant flower – bet you can already guess what this is used for!

These fragrant Osmanthus blossoms are known by other quaint names such as Tea Olive, Sweet Olive, or Devilwood. Most of these species are also native to the eastern parts of North America, regions of Mexico and Southeast Asia, and as well as Hawaii and New Caledonia.

And since there are only 15 species, here are the top 5 garden favorites of most floral lovers! The Sweet Olive (O. fragrans), the Orange Osmanthus (O. aurantiaca), the False Holly (O. heterophylla), the Delavay Osmanthus (O. delavayi), and the Devilwood (O. americanus).

In historic Chinese traditions and cultures, the world of flowers has very deep symbolism in the art of Feng Shui. These flowers symbolize good luck, status promotion, and literary success according to Chinese beliefs.

Additionally, Chinese customs believe that Sweet Olives are symbolic of honor and preciousness. It is an embodiment of nobility and the wishful thinking of noble sons.

Taking a look at Chinese traditional arts, a Sweet Olive flower is a euphemism for life, love, sex, and death.

Not only do these flowers symbolize good luck in Chinese Feng Shui, but these blossoms also mean something good and lucky! In the language of flowers, the Sweet Olives mean an incoming good fortune and a bounty of blessings!

What does a White Osmanthus Flower Mean?

Clusters of intricate white Sweet Olive flowers denote the meaning of prosperity and bounty. Seeing these during its first bloom will definitely be a sign of fortune and positive outcomes.

What does a Red Osmanthus Blossom Symbolize?

Red is indeed a very powerful color in Chinese tradition and Feng Shui. A red Osmanthus flower is symbolic of protection – not only from evil and darkness but most especially from bad luck!

What does an Orange Osmanthus Floret Represent?

Orange Sweet Olive blooms not only indicate bounty but also bountiful and glorious happiness! A happiness which may be because of the incoming prosperity and good luck!

What is the Cultural Significance of an Osmanthus Bloom?

Southeast Asian countries such as the likes of Japan and China, have a very deep and meaningful cultural tradition with Sweet Olive flowers – although China has a more popularized practice for it. In Japan, these flowers are called the usugi-mokusei while the Chinese refer to these flowers as the kwai-fan.

During the season of Autumn when the air turns cold and the daylight shortens, the famous Chinese Moon Festival or Osmanthus Festival is celebrated. Festivities are held during the month of September when the flowers are in bloom and used as the festival’s official floral motif.

According to the lunar myth about the festival, the celebration is actually in honor of the fragrance of its flowers – particularly the white Sweet Olive ones! During the time its flowers bloom, a bountiful incoming harvest and moon divine blessings – or so as the Chinese myth says.

What is a Chinese festival without the food delicacies right? During the Moon Festival, Sweet Olive blossoms are used to create several tasty food and drinks. These include an Osmanthus steamed cake, crafted fermented wine, infused teas, and other numerous Osmanthus flavored dishes!

What is the Folktale Associated with an Osmanthus Flower?

Since these flowers are well celebrated during the Osmanthus Festival, you just have to know the legend as to why this happens to be so! According to the lunar legend, the flowers used to only grow on the face of the moon and that it was not alone.

Wu Gang, a mythical hero was bound to endlessly cut the tree down daily but to his surprise, grew the exact equal amount the tree was cut down for! Some say this was his divine punishment for upsetting the gods with either his arrogance or laziness.

What does an Osmanthus Floral Tattoo Symbolize?

In the Chinese arts and traditional Feng Shui, it is no doubt that all these flowers have a positive chi to them. So it is practically good luck to get this floral tattoo! Not only that but this design also embodies good traits such as nobility and honor. Such traits are not only exclusive as personal qualities, but also in words and actions.

You read it right – the collective term for an Osmanthus is Osmanthuses! Apart from being an ornamental plant, it is also used in various economic fields such as in culinary, perfumery, and folkloric medicine.

The plant’s berry fruits are safe to eat while the leaves of Sweet Olive are used to add more fragrance in infused teas. Some say that the infusion with these leaves has a sweet apricot-like taste! Traditionally in Japan and China, the flower is highly valued by tea connoisseurs. It is famously used as a tea additive to enhance the natural fruitiness of the finest green and black teas.

The Chinese have also developed a practice in extracting the floral oils for their fragrance. Not only does it add that sweet apricot-like scent to perfumes, but it also can be used in other body products such as creams, soaps, and lotions.

Aside from its oil used in cosmetic and beauty products, the Chinese also have a folkloric medicinal application as a medical herb. The extracted oil is considered as China’s top 10 traditional flowers used in creating antidepressant blends of medication. A word of warning that it’s a must to always consult a medical professional before using this plant or any part of it for medical purposes.