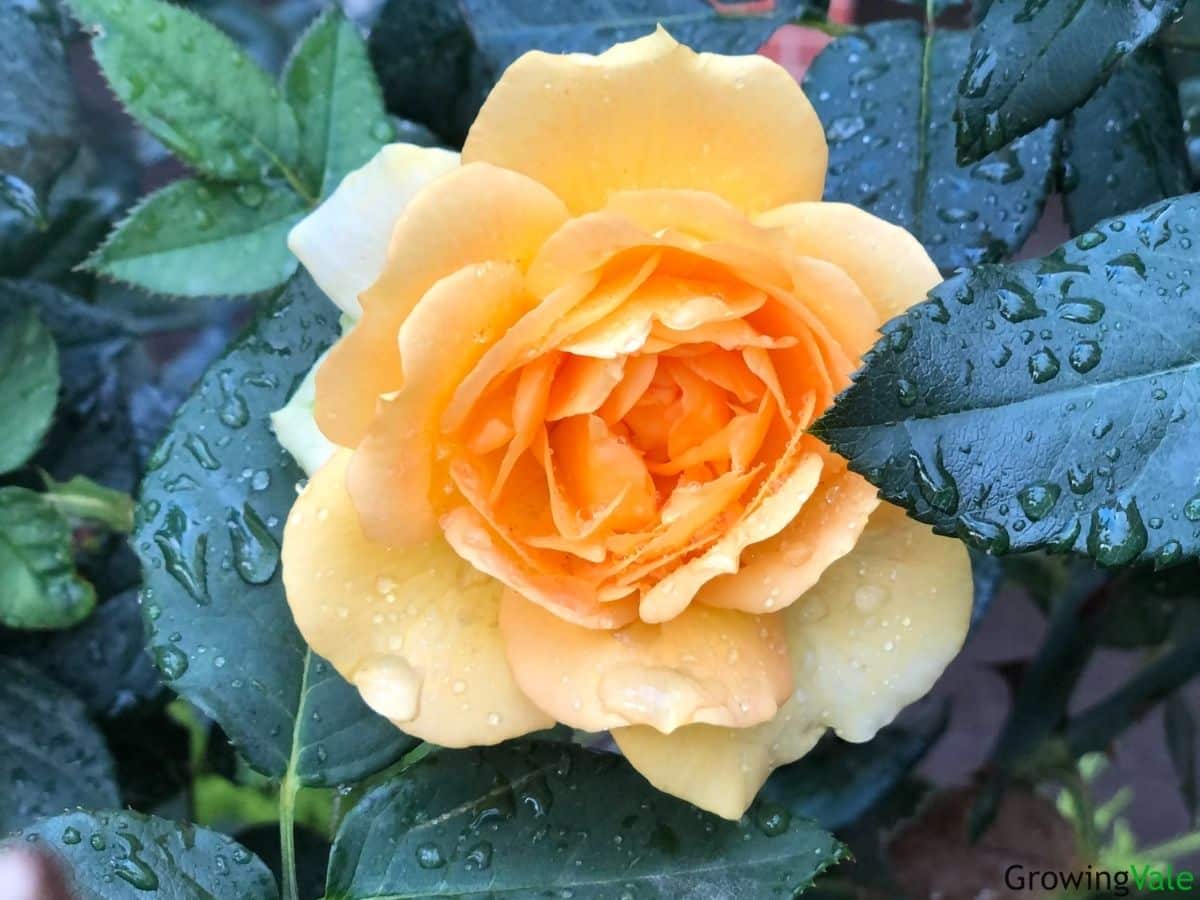 The flowers come in multiple colors all of which bear a sweet, delicate scent. Growing Roses in your garden is very simple yet rewarding with its beauty – and with the meaning and symbolism behind this flower, you will definitely want to have these thorny flowering plants in your garden.

Roses are one of the most historic flowers in the world of plants – dates as far back as 35 million years ago! It wasn’t until the 12th century that these beauties were first described. The Rose is a perennial prickly shrub or small tree with pinnate leaves famously cultivated for its showy fragrant flowers.

It is a part of the Rosa genus from the Rosaceae or Rose family. The genus name Rosa was taken from an Old English word Rōse and the Greek word Rhódon meaning Rose. Some people say the Rhododendron is a bigger tree version of the Rose! There are 100 species in various colors of these beautiful flowers.

Roses are primarily native to temperate regions of the northern hemisphere. Most of the Rose species are distributed in Asia and North America while some are found in Europe and Northwest Africa.

There are two major species rising to the top – the Damask Rose (Rosa x damascena) and the Rugosa Rose (Rosa rugosa). And since there are several species, varieties, and cultivars, the Rose is grouped into multiple classes.

Roses are iconic flowers because of the popularity it gains during the most romantic time of the year – Valentine’s Day. In the United States alone, around 30 million stems of roses are sold per year! It can be given on any day or occasion because a rose symbolizes deep emotions – especially feelings of love and affection.

During the Roman era, Roses were symbolic of victory, pride, and triumph – especially for gladiators and warriors from war or fights. For the Romans, this was also a blossom of Venus, the ultimate blossom of love.

Similarly, there is a special symbolic meaning for bouquets or garlands of Roses. A beautifully arranged bouquet of Roses symbolizes gratitude while a garland symbolizes joyous rewards. Meanwhile, a single stem is symbolic of completion and perfection.

Additionally, Roses are the designated birth month flowers of June.

The beautiful meaning behind Roses is just as awe-inspiring as its symbolism. In the language of flowers, a Rose indicates sweet delicacy and timeless beauty. Although not every meaning for this flower is quite pretty as it may seem.

Famously dubbed as a flower that represents happy love, it may also sometimes depict anxiety and worry – probably for a love not reciprocated!

What does a White Rose Flower Mean?

A white Rose flower is as gracious and radiant as it first blooms. This sight to behold embodies floral charm and innocence.

What does a Red Rose Blossom Symbolize?

Red Roses are by far the most popular and highly demanded flowers in the world. Its deep color and the luscious fragrance is symbolic of passionate love and deep desires.

What does a Blue Rose Floret Represent?

Although uncommon for the color of Roses, this blue color speaks of achieving the almost impossible and the mystery of adventures!

What does a Yellow Rose Bloom Bloom Indicate?

A yellow Rosa flower is often taken as a seal of friendship and the remembrance of such happy moments. In some cases, it may also indicate jealousy and an unrequited love.

What does an Orange Rose Flower Symbolize?

Rosa flowers with orange petals are a burst of warmth and welcome when in bloom. It is symbolic of pure fascination and genuine happiness.

What does a Pink Rose Blossom Mean?

Pink Roses are the second most popular color for this flower. Its preppy color and radiance ooze of desire, enthusiasm, and passion!

What does a Purple Rose Floret Indicate?

What does a Black Rose Bloom Represent?

Black Roses aren’t at all as loved nor popular as the other floral colors. It is a flower representing death and farewell. On a positive note, these flowers may also symbolize rebirth.

What does a Green Rose Flower Mean?

Green Roses are just as uncommon and rare as the black ones. It ideally means unusual or surprising.

What is the Cultural Significance of a Rose Flower?

In 1840, the first Rose collection was launched with over a hundred flowers in numerous colors and forms. The flowers were on display in the Victoria arboretum and in the Abney Park cemetery for many to see. Today, this cemetery is now a public park and is one of the magnificent seven cemeteries in London.

Romanian culture has a special custom when it comes to freshly bloomed Roses. Fresh flowers were picked and placed on doors where confidential meetings were held. This tradition gave rise to the famous term Sub rosa which meant under the Rose – indicating what is now a metaphor for keeping something secret or hidden.

What is the Biblical Meaning of a Rose Blossom?

The Bible and Church regard special meanings and symbolism for the Rose. The Christian Church believes it is a flower sacred to the Holy Mother Mary. The Rose is Mary without the thorns symbolizing her exemption from the consequences of sin.

According to a Christian legend, Mary was believed to be appreciating the flower’s sweet scent when Jesus was conceived. Other legends believe that this flower was a Christian symbol of martyrdom (red roses) and purity (white roses).

Similar to the Greek myth, Roses were once thornless. During the fall of Adam and Eve from the garden of Eden, Roses had no thorns and that its scent now represents the forgone paradise of man.

What is the Spiritual Influence of a Rose Floret?

Roses have a special magic power – especially purple Roses! The presence of Roses influences a mind full of negative thoughts and improves emotional mood swings. It offers a sense of cleansing and emotional healing for those full of doubt.

Rosa flowers also promote healing and balance of important spiritual chakra and energy flow. It radiates feelings of relaxation and frees the spirit from the troubles of daily life. When situations are stressful and traumatic, this flower calms and stabilizes erratic emotions and thoughts.

Red Roses have a unique spiritual enchantment. Such flowers promote stronger love and union between couples as not only partners but also friends. Similarly, it will also attract the union of the body and soul. Such Roses will also help in keeping an open mind and heart to the beauty and bounty of the Earth.

What are the Folktales Associated with a Rose Bloom?

As most fairytales go, the tales about Roses are as old as time. During Roman times, the Rose is associated as the flower of Venus – only bearing white petals. The myth says that Roses only turned a crimson red when the goddess accidentally pricked herself on a bush.

Another Roman myth tells the tale about how Roses got their thorns. According to the myth, Venus’ son, Cupid was admiring the flower’s beauty and sweet fragrance when a bee appeared and stung his lips! Upset, Venus strung Cupid’s bow with the bee’s stingers and hit the Rose’s stem.

Ancient Greeks also have a story to tell about Roses. In the mythology, the Greek goddess of flowers, Chloris stumbled upon the body of a dead yet beautiful nymph. Saddened upon her death, the goddess gathered around other gods and goddesses to help turn the nymph into the beautiful Rose flower.

What does a Rose Floral Tattoo Symbolize?

A Rose floral tattoo symbolizes the highest level of an individual’s passion. It speaks of the person’s determination and genuine flame one feels towards almost anything in life!

Those who bear this floral beauty on their body wish to represent their inner beauty and achieve balance in life. Similarly, this is also a symbol of their grace and gratitude towards the blessings in life.

Roses are mainly cultivated for their beautiful flowers and delightful fragrance – which just so happens to be affected by climatic conditions. You can find these flowers in food, perfumes, hygiene products, and even in art!

For example, the Damask Rose is famous as a source of perfume for many cosmetic products. Meanwhile, the Rugosa Rose supplies delectable rosehips rich in vitamin C and is found in many tea infusions because of its calming effects.

According to ancient Greek and Roman practices, Rosa flower petals and hips were used in cooked dishes and preserves in vinegar. The Romans were the first to build hot houses to sustain floral supply all year round. They traditionally used these flowers for important ceremonial purposes.

In the Middle East, Roses were used as a traditional treatment for treating depression and anxiety. Additionally, Rose-infused water mixed with honey or other tea leaves has claims to treat various skin ailments.