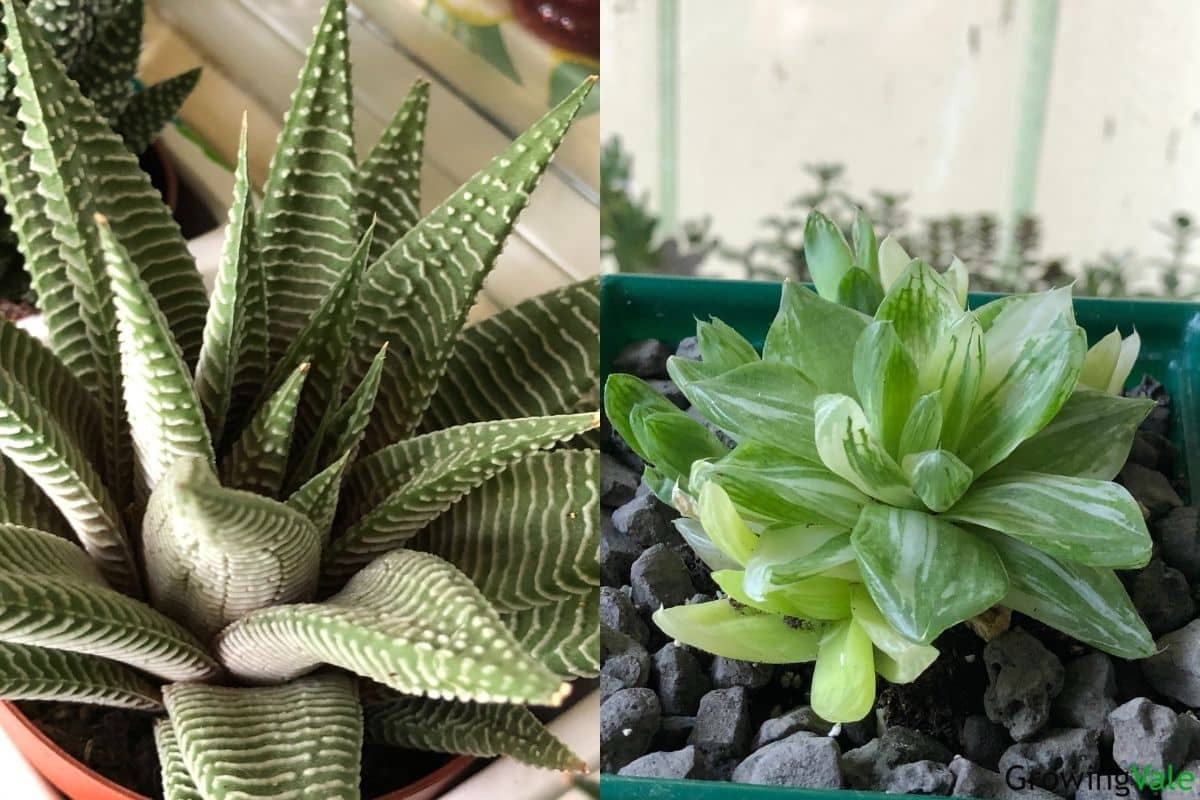 Haworthia succulents are a frequent favorite due to their clumping habit, small size, and incredibly detailed foliage. Leaves can be tough and highly textured or incredibly smooth and translucent! Tougher varieties are generally easier to care for as they can withstand fluctuations in temperature and humidity. Those with delicate leaves are more prone to diseases if care is not optimized.

Some Haworthia cultivars are very common, but many are far more rare. More than a handful of varieties can easily cost thousands of dollars due to their unique colors and forms, but those that are regularly available on the market are reasonably priced and are already undeniably eye-catching. You must look closely, however, as Haworthia are quite small compared to other drought-loving plants.

Haworthia succulents can be as short as 1-2 cm to as long as 10 cm in height, making this genus notable for its miniature-sized species. Collectors love that their size is limited as they take up minimal space but have quite a visual impact. Listed below are some of the most notable species and cultivars, though there are about 150 known varieties.

This highly sought-after species is commonly known as cushion aloe, Cooper’s Haworthia, and pearl plant. It is popular among Haworthia species due to its almost transparent, marble-like leaves. They are plump, shiny, and apple green to bluish green in color. If you hold a rosette up to the light and peer at the leaves from the side, it almost seems as though they are tiny balloons of water.

From a top view, the leaves of Haworthia cooperi can appear like irregularly shaped polygons. Green streaks from the base of the leaves extend to just along the edges. The foliage is so delicate that this plant prefers to be in more shade. It is also notably small at maturity, reaching a maximum height of just 5 cm.

This species has incredibly unique leaves. They look like rectangular columns with soft edges. These arise in a fan-like manner from the plant’s central shoot, which is often masked by the newly developing leaves and the base of old ones. Due to its remarkable appearance, this species is often referred to as “horse’s teeth”.

The atypical rosettes of Haworthia truncata are a muted shade of dark green, as though the underlying tone is grey. This can sometimes make the leaves appear dusty. The most popular cultivar of this species is ‘Variegata’. It has the same columnar leaves, but they are set apart by their cream or white-colored streaks.

Haworthia fasciata is the most common type of Haworthia. Chances are your local garden center or nearby plant store has a few for sale. It is colloquially referred to as “Zebra Plant” or “Zebra succulent” because of its white stripes. The sharply tapered foliage is quite tough compared to those of other Haworthia species, making it more adaptable to non-optimal conditions. It’s also very similar to Haworthia attenuata.

This species is also known as Haworthia picta. If you peer closely at the leaves of its rosettes, they terminate in a triangular shape and are marked by a web-like or striped cream-colored pattern.

The leaves vary considerably in color, depending on the cultivar. While the main parent species has smooth and bright green leaves, popular cultivars are textured and more dark-bodied.

The rosettes of this species can be quite similar to those of H. emelyae, but they are different in that they are less compact. The leaves can be described as triangular columns jutting out of the substrate. They are also more rounded and can appear more translucent or light-toned at the top surface.

As its scientific name indicates, this species can resemble a spider. It is commonly known as spider nest or paper rose. Extending outwardly from the leaves’ margins is a profusion of fine bristle-like white fluff. These can be so abundant that they mask most of the rosette.

Haworthia cymbiformis is commonly referred to as Cathedral Window Haworthia. It produces fleshy, stemless rosettes that are quite eye-catching due to their bright green coloration and plump leaves. They are broad at the base and taper towards their ends, like the bow of a boat. This is why it was given the epithet cymbiformis, which is rooted in the Latin word ‘cymba’ (meaning ‘boat’).

The foliage is also relatively see-through, though not nearly as translucent as that of H. cooperi. A popular cultivar, ‘Variegata’, has leaves marked with white streaks. In the wild, delicate clumps of rosettes are found along rocky outcroppings and slopes close to bodies of water in the Eastern Cape Province of South Africa.

Haworthia retusa is commonly known as star cactus due to its star-shaped rosettes. Its leaves narrow somewhat broadly towards their ends and taper at a sharp tip, giving them the appearance of triangles. The upper surface is marked with fine cream-colored lines and is quite translucent. At maturity, a single rosette can reach a diameter of 15 cm.

The Haworthia coarctata resembles H. fasciata, except its rosettes grow much taller than wider. A single shoot can reach a height of 20 cm, which is quite tall for a Haworthia! The leaves themselves don’t grow long, but occur compactly around the narrow shoot. This can give the plant the appearance of being a slim tower of striped, sharply tapered leaves.

Some people believe that Haworthia limifolia has healing properties. The plant supposedly contains compounds with antibacterial and antifungal properties. Perhaps this explains why the foliage is quite resistant to disease. The medicinal use of this species is rarely highlighted, however, and many gardeners raise the plant without ever becoming aware of this property.

This species is remarkably easy to care for and is quite hardy due to its tough foliage. The leaves can be light or very dark green, depending on sun exposure and cultivar. They are highly textural as all of their surfaces are ridged, just like a washboard. For this reason, this species is also known as ‘Fairy Washboard’.

H. maxima is aptly named as it is the largest of all Haworthia succulents. The leaves are marked all over with white protuberances, similar to those of H. limifolia, but not as wide. It is a hardy plant due to its tough foliage, but it seldom produces offsets.

Currently, it is the subject of taxonomic investigation as it is synonymous to H. pumila and was recently reclassified under the Tulista genus.