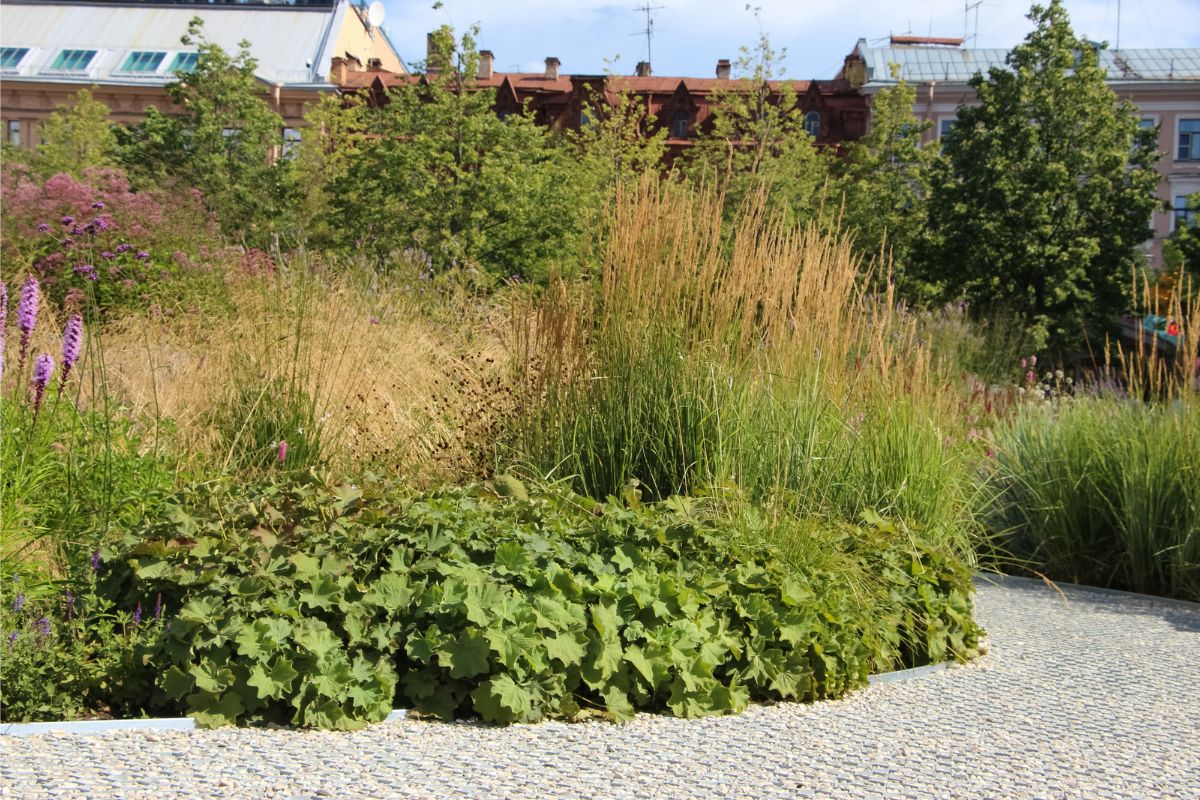 Let’s explore some of the best landscaping Karl Foerster grass companion plants and ideas you can start implementing.

Karl Foerster grass (Calamagrostis x acutiflora) is a type of feather reed grass that has won several awards as an ornamental plant. It is named for a German nurseryman who specialized in low-maintenance gardens.

Set apart by its attractive flower stalks, which look like feathery plumes and appear in early summer to late fall, it is a lovely choice for adding texture and height to just about any landscape. Planting Karl Foerster grass as a backdrop or as a vertical accent can add dramatic effect to cottage gardens.

As the lengthy fronds of Karl Foerster sway in the slightest breeze, it is often grown as a specimen plant. Fresh or dried arrangements can be made with the harvested inflorescences and bright green foliage. In late winter, the foliage may develop a warm, golden tan color.

Ornamental grasses are some of the best companion plants for this perennial cultivar. You may also grow it alongside other low maintenance perennials for a year-round mix of textures and elegant hues.

What to Plant With Karl Foerster Grass

This feather reed grass pairs well with some of the most popular ornamental grasses that bloom late into summer or fall.

Listed below are some groups of grasses and other perennials with eye-catching cultivars.

Coreopsis is a notable genus of perennials with eye-catching flowers. These are the perfect companion plants if you intend to cultivate a colorful garden. Its common species, which tend to bloom in summer to fall, are known as tickseed or calliopsis. Their flowers are contrasted by green to blue foliage.

Ideal for a mass planting around feather reed grasses, these plants favor full sun and have a prolonged growing season in optimal conditions. When provided with a regularly moistened and well-draining soil, they require little maintenance.

The golden tan of the reed grass’s feathery flowers complements the bright yellow petals of rudbeckia blooms. Apart from drawing many pollinators to the garden, rudbeckia is a fine choice as a feather reed grass companion because it shares many growth preferences with the latter.

Both rudbeckia and the karl foerster grass favor regularly moistened, well-draining soil. To an extent, these plants can thrive in moisture-retentive substrates and are likely to exhibit new growth at around the same time of year. When exposed to full or partial sun, they are less likely to be plagued by insect problems.

‘Karley Rose’ is an ornamental grass that is known for being resilient and easy to manage. As its colorful flowers can last into the early winter months, it is considered a cool season grass. Depending on ambient conditions, the lilac blooms may begin to appear in early spring.

Unlike the golden tan blooms of the Karl Foerster feather reed grass, which grow up to 6 feet tall, those of this cultivar occur on stalks that grow to a maximum height of about three feet.

Hardy to USDA zones 3-4, the hairy vetch is one of the most versatile cover crops as it can be used as fodder, green manure, or cultivated for its legumes. An annual that can last into late winter, it is frequently grown to suppress the spread of weeds in the garden or in pastureland. It can also effectively add texture and color to zones with full or partial sun exposure.

‘Blonde Ambition’ is a popular ornamental grass with many morphological similarities to the Karl Foerster feather reed grass. Its blonde seed heads arise from a narrow clump that produces a dense tuft of lengthy, green foliage.

Drought tolerant, blonde ambition grass can be grown alongside many other blooming perennials under full sun.

Peas are a great companion to the Karl Foerster feather reed grass. A staple vegetable for just about any type of garden, the height and growth requirements of pea plants make them fairly compatible with many other grasses.

Low-maintenance and tolerant of a wide range of sun, shade, and soil conditions, peas are perfect for adding spring and fall attraction in grassy gardens. Their light to deep green foliage complements the tan color of Karl Foerster blooms.

A water-loving vegetable that can be cultivated as a ground cover plant, spinach is a lovely companion for just about any type of feather reed grass. Its deep green leaves thrive best under full sun or partial shade. Of course, apart from adding ornamental value to the garden, this perennial can be used as a healthy source of nutrients!

With spring to fall flowers that can drastically add color and diversify pollinator communities in an ornamental garden, chrysanthemums have features that can complement those of the Karl Foerster grass. Blooms can begin to appear in early June to July (late summer), conditions permitting. In warm locations, they may last through fall.

Chrysanthemums are likely to attract beneficial insects. These should help control pest populations that are known for attacking various types of feather reed grass. To maximize their potential for attracting pollinators, situate these blooming ornamentals under full sun.

Gracimillus is a type of maidenhair grass. Also known as ‘Chinese silver grass’, this Miscanthus sinensis cultivar produces late summer plumes with a golden tan color. In many ways, it resembles Karl Foerster grass. Both cultivars can be grown alongside one another to add texture and vertical dimension to a cottage garden.

The ‘morning light’ is another cultivar of M. sinensis. This popular low-maintenance grass is widely regarded as one of the best varieties of its kind. With bright green foliage that arises in a vase-like orientation around the base of the plant, this highly textural and cold hardy grass is the perfect addition to a winter garden.

Liatris is a flowering ornamental that arises in dense clusters. Its delicate foliage and vivid inflorescences complement the reeds of the Karl Foerster grass. In late spring to summer, its lilac flowers provide a contrast to the textural foliage of grasses. Its shoots die back in winter, only to arise from its corms in the succeeding spring.

Russian sage can be cultivated as an ornamental herb or subshrub. This eye-catching plant is known for its no-fuss requirements and for its rewarding inflorescences. Perfect for adding color to the country landscape or garden, it can be grown in rows in front of clusters of Karl Foerster or other feather reed grasses.

Though the reeds of Karl Foerster and the shoots of hibiscus plants are remarkably different, they can be situated close to one another. Able to thrive in water retentive soils, these plants have strikingly different blooms that can be used to diversify the pollinators in your garden.

The Elijah blue fescue, a striking ornamental due to its bluish foliage, is a Festuca glauca cultivar. This attractive grass is a fine choice for maintaining textural attractiveness and color in the garden all throughout the year. Next to the greenish foliage of Karl Foerster, the lengthy leaves of this companion plant should provide a nice contrast.

Mexican feather grass and other hybrids of Calamagrostis species are often grown for their lengthy inflorescence stalks, which are topped with feathery reeds.

Compared to other popular types of ornamentals in the grass family (Poaceae), these are perfect as companion plants to the Karl Foerster feather reed grass because they share many basic requirements.

A grass garden can be made more attractive by selecting for species with subtle differences in height and color. Karl Foerster can be placed alongside other species of equal height, whereas smaller ornamentals can be situated in front of its stands to draw attention to its gracefulness in the wind.

What Not to Plant with Karl Foerster Feather Reed Grass

Avoid growing species that are known to self seed vigorously or rapidly spread via underground rhizomes. The ‘Karl Foerster’ cultivar may be unable to compete with other self-seeding grasses due to its inability to spread on its own as a non-invasive feather reed grass.