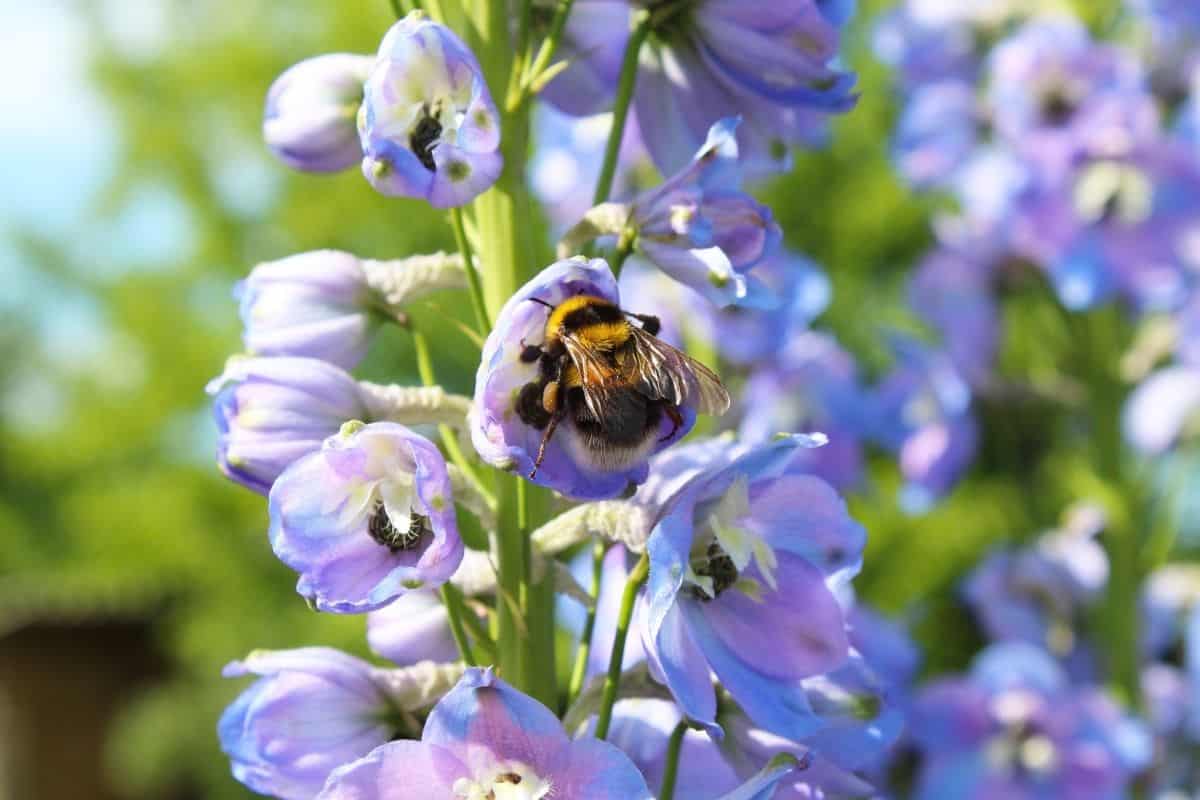 Delphiniums are one of those flowers that just brighten up any dull day with their beautiful colors. It appears as delicate spikes of blossoms admired during hot summer days. If you haven’t heard about these yet, it is definitely one you should read about! It will come as a great addition to your garden of blooms!

The Delphinium flora first came to be mentioned in 1664 as an exquisite ornamental garden decor or cut flower. It is also commonly known as Larkspur which is classified as a perennial herb with tall stems and beautifully spiked flowers. It is a native plant in some European regions and in some parts of Northern and Central Asia.

It comes from the Delphinium genus of the Ranunculaceae family consisting of 62 other genera.

The Latin genus Delphinium derives from old Greek words delphinion meaning larkspur and delphis hinting at the appearance of the flower resembling that of a dolphin.

Delphiniums are associated with the birth month flower of July. Although the more common name Delphinium came to fame, the seed pod of this plant appears to resemble the foot of a wee little lark songbird. Hence this flower’s other frequent name, the Larkspur.

The most favorable species known as common rocket larkspur Delphinium ajacis is considered the flora of royalty symbolizing the loyalty and strength of knighthood. As a result, these flowers are also motifs of decor wherein the name of a King is written.

Several surprising meanings are embodied by these beautiful flowers. In the language of flowers, the general meaning represented by Delphiniums include heavenly feelings, levity, and ardent attachment.

The lush florals also send the message of having great attributes of being fun, playful, and open-hearted and maybe sometimes it can also mean one’s fidelity! Whatever meaning it may hold behind its grace, it is surely an exquisite flower to behold.

What does a Red Delphinium Flower Mean?

Ardent and pure love is what red Delphinium flowers stand for. It embodies the burning passion and desire within the heart and soul.

What does a Blue Delphinium Blossom Symbolize?

Coming across a field or garden of blue Larkspurs holds the symbolic meaning and feeling of peace, security, and order. It is a symbolism of serenity similar to the calming blue sea.

What does a Pink Delphinium Floret Indicate?

Pink Delphiniums embody the attributes of fickleness, feelings of a light heart, and the constant phases of change. It sends the message that each and every day is a new start.

What does a Purple Delphinium Bloom Represent?

A purple Larkspur flower manifests a big heart and one’s first true love. It is also a representation of one being ambitious and haughty.

What does a White Delphinium Flower Symbolize?

White Delphiniums are symbolic of good health and protection. It also offers the senses of swiftness and lightness.

What is the Spiritual Significance of Delphinium Flowers?

Larkspur flowers help in retaining one’s focus to complete assigned tasks or errands. The blossoms act as a display reminder to not be forgetful and easily distracted for most adults and children!

What are the Mythologies Associated with Delphinium Blossoms?

The first to believe in the power of the Delphiniums are the sea pirates! It was said that Larkspurs have the same attributes as those of friendly and playful dolphins.

The ancient Greeks also believe in the mythology of this flower. It was said that the Larkspurs bear the floral message of despair and mourning pertaining to the tragic death of Ajax. The myth says that out of infuriation, he committed suicide spilling blood that now came to be the Delphiniums. It was said that the initials AIA can be seen on the petals of the flower and signifies the name Ajax upon taking a closer peek!

What does a Delphinium Floral Tattoo Symbolize?

A Larkspur preference of tattoo design is commonly chosen by those who have a pure heart. It symbolizes one’s sweet disposition and the genuine desire for a good laugh!

Traditional uses of Delphiniums date back to Medieval times. It was first known as a remedy for killing lice and some common parasites! Other cultures such as the likes of Native Americans and Europeans used the flowers as either blue dye or ink for writing. The floral extracts are mixed with alum to create the necessary pigments.

Meanwhile, the Larkspurs also function as a treatment for some common ailments. The flowers themselves and their seeds are known diuretics that have a pungent taste and odor. The leaf can also be juiced and used to treat hemorrhoids. The Cherokee folk also have a great use for the seeds!

An infusion can be made from the seeds and is used to treat ailments such as asthma, edema, and acute gastroenteritis or be used as an insect repellent! A word of warning that it’s a must to always consult a medical professional before using this plant or any part of it for medical purposes.