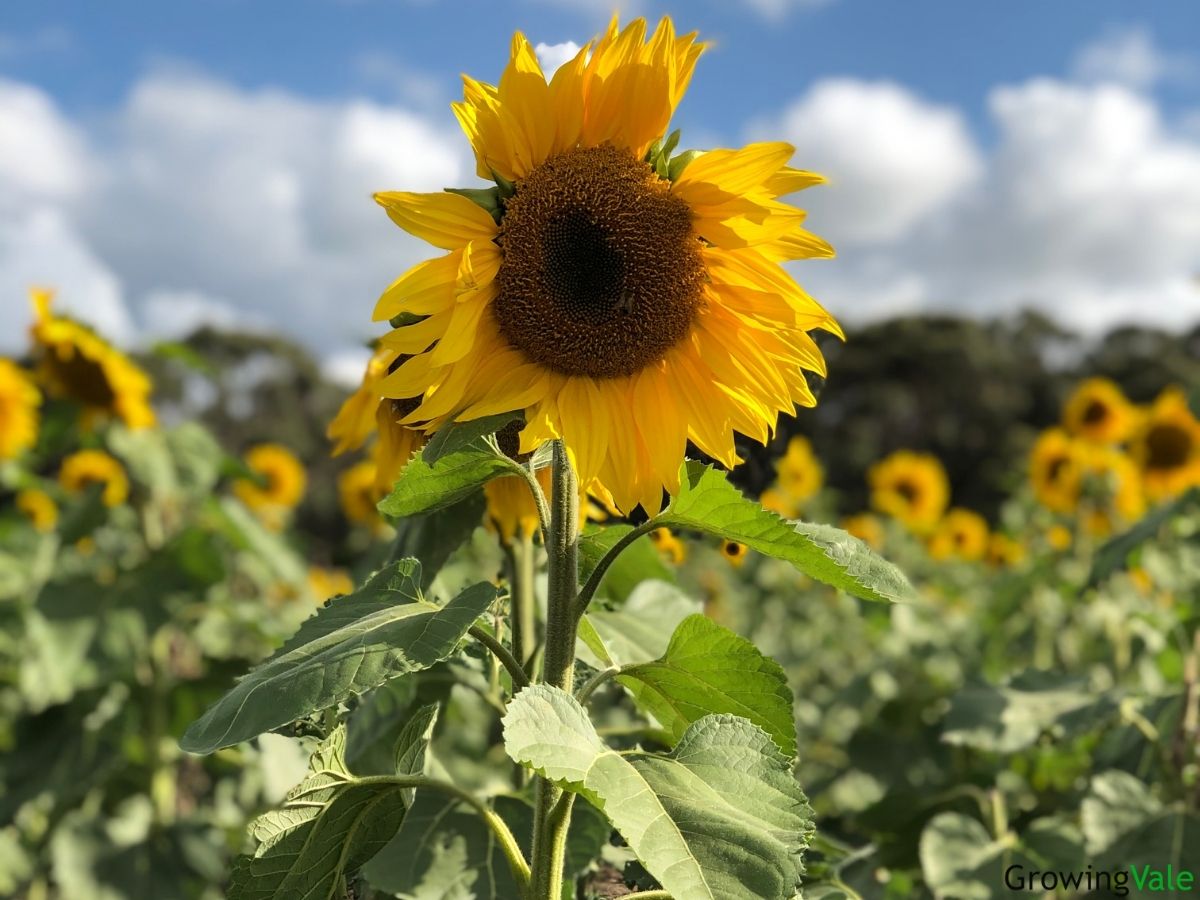 The Sunflower is probably the first flower you think of when Summer is coming. Its bright and dainty yellow petals will remind you of the first warm sun after the cold of Winter. In fact, this flower is among one of the most popularly adored and demanded in the world! Not only is it famous for its adorable appearance, but it is also famous for its meaning and symbolism when it comes to the language of flowers.

Many floral lovers all over the world love growing sunflowers – it’s a sure bet win that you’ll be adding these to your garden in no time!

The Sunflower is defined as a composite plant with large yellow-rayed flower heads bearing edible seeds and oil. They are also either annual or perennial herbaceous plants popularly cultivated as ornamentals.

Such flowers belong to the genus Helianthus of the Asteraceae or Aster family. There are around 70 species of this big-headed flower that are native to most parts of North and South America. And can you guess what countries produce the top supply Sunflowers of today? It’s none other than Ukraine and Russia!

Its genus name Helianthus comes from the Greek words Helios meaning sun and Anthos meaning flower. Its common name is just its genus name combined – a Sunflower! This flower got its lovable name from how its head follows and turns toward the sun during the day – this is called the diurnal movement.

There are quite a few interesting symbolic meanings attached to the lovable nature of Sunflowers. For example, it is the world’s most iconic floral symbol for Summer and the zodiac Leo! But do you know what else this interestingly symbolizes? The Vegan Society!

In fact, the sunny state of Kansas has honored these flowers as its official flower symbolizing a suffrage cause. Not only that, but countries such as Russia and Ukraine have chosen these blossoms as their country’s national flower.

In modern-day Peru, the once ancient empire of Inca had a tribal belief about the origin of this flower. They say that before the start of civilization, Sunflowers once symbolized their sacred sun god Inti.

Moving on to the Victorian era, Sunflowers were viewed as a floral motif of the Aesthetic Movement – it stood as a social reaction against the Industrial Age. The flowers were carved onto wooden chairs, glazed on vases, and embellished on iron railings as a sign of protest.

Chinese traditional beliefs also have a symbolic meaning for Helianthus flowers. They say that because of its many petals – it is a symbol of bountiful food and the immortality of life.

The sunflower meaning is quite straightforward. From the Greek word origin of this flower, it literally means and translates to a flower of the sun or a flower from the sun!

For some, these flowers are seen as tokens of recognition and fame – well a Sunflower is famous! But a deeper meaning behind this flower is that it speaks the whole truth.

What does a Yellow Sunflower Blossom Mean?

The Sunflowers are most popular because of their bright yellow petals but do you know what they mean? This flower means a long fruitful life and best wishes!

What does a Pink Sunflower Bloom Symbolize?

Pink Helianthus flowers were just recently developed as a hybrid and are a symbol of haughtiness and charming adoration!

What does an Orange Sunflower Blossom Indicate?

A Sunflower with orange petals indicates something quite contrary to its cheery disposition. It indicates a false hope and pride not kept in check!

What is the Cultural Significance of a Sunflower Bloom?

Sunflowers are one of the most culturally significant florals during the 16th century in some regions of South American. The Inca tribe had a procession especially for these! Inca priestesses in modern-day Peru would practice worshipping the sun god Inti by wearing the giant flowers. These were no ordinary floral ornaments – it was all made from solid gold and worn on clothing!

Ever heard of the Sun Dance? Well, this popular dance was traditionally practiced by other native South American tribes. They also worshipped Helianthus flowers by performing the sacred Sun Dance!

Ethnic tribes also practiced using its seeds to help the dead. Sunflower seeds were placed on graves to guide and sustain the long and dangerous journey of the dead to the Happy Hunting Grounds. In their traditions, this symbolized strength and endurance during tough times.

What is the Biblical Meaning of a Sunflower Blossom?

Sunflowers in the Christian religion is a symbolic meaning for a soul turning towards the guidance and light of Christ.

It is also a flower that speaks of the divine wisdom and holy righteousness of Christ. With the flower’s habit of following the movement of the sun – the same goes for the followers of Christ. The faithful who direct their eyes and hearts towards the Lord shall be led towards all good things in life.

What is the Spiritual Influence of a Sunflower?

The spiritual powers of a Sunflower are so deeply rooted that it symbolizes the strength of the sun – a strength in terms of warmth and assurance of a bright day. The essence of a Helianthus flower is not only leaning on strength but most especially on the success of achieving a healthy life.

Its presence provides spiritual sustenance that allows happiness and the sense of focus to flow radiantly.

What are the Folktales Associated with a Sunflower?

Many folktales about Sunflowers come from many different countries and cultures. For instance, an ancient Greek myth tells a story about the nymph Clytie and the sun god Apollo. The movement of the Sunflowers – its head following the motion of the sun was a similar thing Clytie did with Apollo.

The nymph maiden was so deeply infatuated with the god that she stared up at him in the sky without food and water for 9 days! She eventually withered away but was turned into a beautiful yellow blossom known as the Sunflower.

Surprisingly after hearing this myth, people still believe the story that growing these flowers in the garden is good luck! Some would even place a Helianthus blossom under their beds to dream about the whole and pure truth they desire to know!

Love is lucky though most especially for the ladies- it seems like the infatuation of Clytie has transcended to modern days! A few love-struck girls would practice placing three seeds on her back and marry the first-ever boy she meets!

In a non-infatuated manner, there is another folktale about the power of protection Sunflowers have. It says that wearing the flowers strung like beads on a necklace can protect you from catching smallpox!

What does a Sunflower Tattoo Symbolize?

The Sunflower itself is already a flower beaming with radiance and happiness. So, what more could a tattoo of this symbolize? Those who choose this design have a very positive and bright outlook in life and want to embody their cheery disposition through this flower.

It also beams with good vibrations and radiates pure joy!

Sunflowers are popularly cultivated as an ornamental plant mainly for all of their parts! Apart from this, these plants also make for an excellent cut fresh flower arranged in bouquets or vases!

In some ancient tribal festivities, Hopi Indian women of Arizona wore wild Sunflowers as hair ornaments and carved the flower onto discs to celebrate the sun god.

Helianthus flowers also have a few culinary uses and medicinal benefits. The Jerusalem artichoke (H. tuberosus) is a type of Sunflower cultivated for its edible tubers. In fact, native Americans had important economical uses for the common Sunflowers (H. annuus) today! Its leaves are used for animal fodder and seeds for an edible snack and oil!

Other parts such as the petals and entire flowers were used to make a yellow dye in traditional face paint and clothing! The stem fibers were also extracted and craftily made into paper!

The historic Cochiti tribe and Cherokee people had medicinal uses for the Sunflower. Fresh juice from the flowers was a home remedy for treating fresh cuts and wounds while a leaf tea infusion was used to treat kidney ailments.